The Schneider Electric Marathon de Paris offers a unique opportunity to make the city yours by participating in one of the most prestigious races over the legendary 42.195 km distance.

The Schneider Electric Marathon de Paris is now one of the biggest marathons in the world, as much for the size of its field as the performances of its runners. Each finisher comes home with incredible memories.

Nearly 145 nationalities and 57,000 runners come to tackle the most fabled long-distance discipline in athletics. In April, this race across Paris, taking in the Champs Elysées, the Bois de Vincennes and Boulogne, offers an incomparable backdrop, with spectacular views and landmarks all along the route.

Along with the Berlin Marathon and the London Marathon, it is one of the most popular long-distance annual running events in Europe.This is the only French race with the gold label of the IAAF Road Race Label Events . 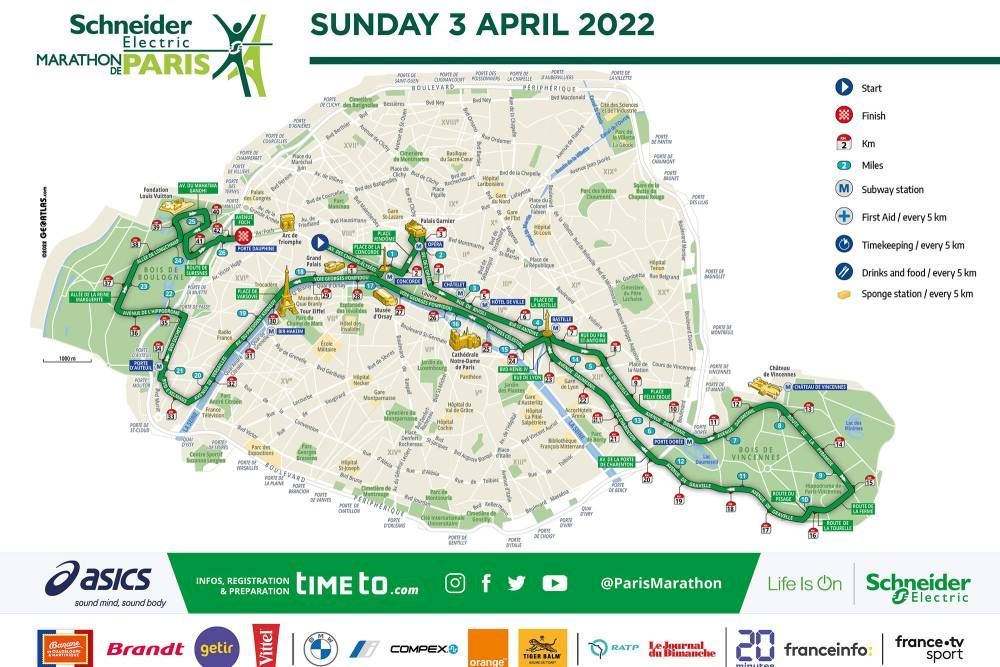 At the top of the Champs Elysées

At the bottom of Avenue Foch

The marathon itself combines personal challenge with the chance to discover one of the world's great cities. The athletes will pound the pavements of the French capital's most famous avenues and plazas, from the foot of the Arc de Triomphe, where they take the start, towards the Place de la Concorde. From the Rue de Rivoli they'll then sweep through the Place de la Bastille. After a glimpse of greenery in the Bois de Vincennes, views of Notre Dame and the Eiffel Tower point the way home.

The race starts on the Avenue des Champs-Élysées going downhill to circle round the Place de la Concorde before turning right onto Rue de Rivoli. The route passes the Louvre, then goes round the Place de la Bastille, and down Boulevard Soult to the Bois de Vincennes. A long loop of the Bois de Vincennes returns the route into the heart of Paris. The halfway point is reached at Rue de Charenton. The route now follows the course of the Seine, passing Île de la Cité and going under the Pont Neuf, then a series of tunnels. There is a large drinks station and foot massage at Trocadéro, opposite the Eiffel Tower. The route continues along the Seine, before branching off east to eventually pass though Bois de Boulogne, emerging for the final 200 metres and the finish on the Avenue Foch.