See other Ultra Marathons in June

Tucked in the quiet southwest corner of the state, the San Juans are home to hundreds of stunning peaks above 13,000ft, hundreds of square miles of National Forest and Wilderness and a rich history of gold and silver mining dating back to the late 1800′s. Whether you enjoy running through a dense forest of aspen or prefer climbing to the high country to view wild flowers, the San Juans can provide endless days of new scenery. Located within the Uncompahgre National Forest, the historic mining towns of Telluride, Ouray, Lake City and Silverton provide easy access to our daily runs as well as a comfortable place to spend our nights. With popular races such as the Hardrock 100mi, San Juan Solstice 50mi and the Imogene Pass Run, it’s no wonder that the San Juans have become a destination for trail runners wanting to experience what the area has to offer. While challenging runs with steep trails, big vertical gains and high altitude pass crossings are everywhere there are also many easier, more moderate, trails for the average runner looking for a casual, less demanding, outing.

Every year thousands of runners travel to SW Colorado to experience the beauty and challenge of running in the San Juan Mountains. The San Juan Solstice 50 mile endurance run is a scenic but very rugged loop at high altitude in the San Juans. The run consists of five main sections: the climb up Alpine Gulch and down William’s Creek, the climb up to the old mining town of Carson, a long section along the Continental Divide, a descent to Slumgullion Pass, and a final hump up and over the Vicker’s Ranch plateau. The very demanding San Juan Solstice 50 is for experienced trail runners only.

Aid Stations will be available at 7 locations. Aid Stations #2 through #5 are fully stocked with sandwiches, and the usual array of cookies, chips, bananas, etc. Aid Stations #1 and #6 are not as fully equipped because few runners eat at mile 8, and few can eat at mile 47.

Awards are broken down into three categories: top three places in men and women, age group awards, and finisher awards for specific times: Sub 8 hours, the Freak of Nature award. Sub 10 hours, the Mutant award. Sub 12 hours, the Cannibal award. Sub 16 hours (the cut off at the finish), the Survivor award.

Runners must have completed a trail ultra. By trail ultra, it means trail runs greater than marathon length, with the exception of the Pikes Peak Marathon, which is accepted as a qualifier. 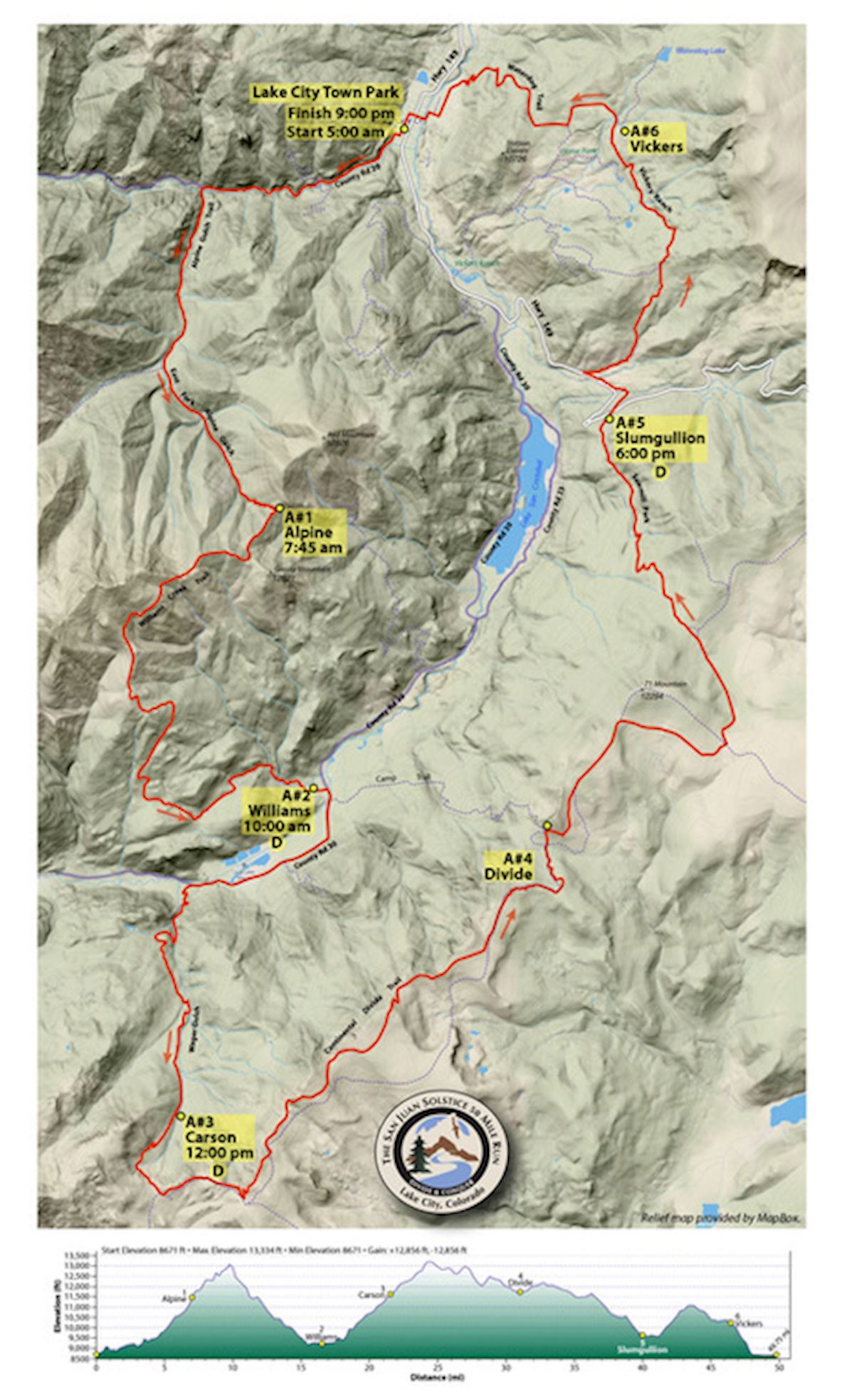 This is an out and back course which starts and ends in Town Park in Lake City. The San Juan Solstice 50 Mile is a race in Lake City, Colorado. Lake City is in the San Juan Mountains in the southwestern portion of the state, and sits at an elevation of more than 8,700 feet. Mountains rise in all directions, and to the west they even top 14,000 feet. Lots of trails and dirt roads crisscross the mountains, and the San Juan Solstice utilizes a series of these in its loop around the town. In so doing, the race makes three major climbs. The first one rises to more than 12,000 feet, while the second rises even higher, topping out at 13,300 feet on the Continental Divide. From there, the race remains on the divide for nearly nine miles, rolling along at high altitude before dropping back into the trees at about mile 36. From miles 40 to 43, the race climbs 2,000 feet more before dropping back into Lake City and the finish.