Part of an annual arts and music festival that takes place each September in Cedar Rapids called the New Bohemia Festival, the New Bo Run Half Marathon is set to make its annual running on Labor Day weekend this year.

The race takes runners on an out-and-back tour of the park trails and roads that lie just south and east of downtown, which run alongside the river on the Sac & Fox River Trail and through the Indian Creek Nature Center — thanks to the riverside location, most of the race course is fast and flat, though there are occasional hills, particularly in the first few and last few miles coming back in to the city.

Everyone is welcomed, young and old!

Half Marathon times will be recorded for 3 hours and course services provided to participants maintaining this pace (approximately 14 minutes per mile). Runners not maintaining a 3 hour finish pace are participating at their own risk without race services. Participants finishing after 3 will be considered unofficial and may not be included in the official results.

Parking is free of charge around downtown Cedar Rapids and in the NewBo neighborhood on the weekends. Early birds get the best spots.

Both races will be chip timed with a starting line time and finish line time for an overall “chip time” in addition to the gun time. 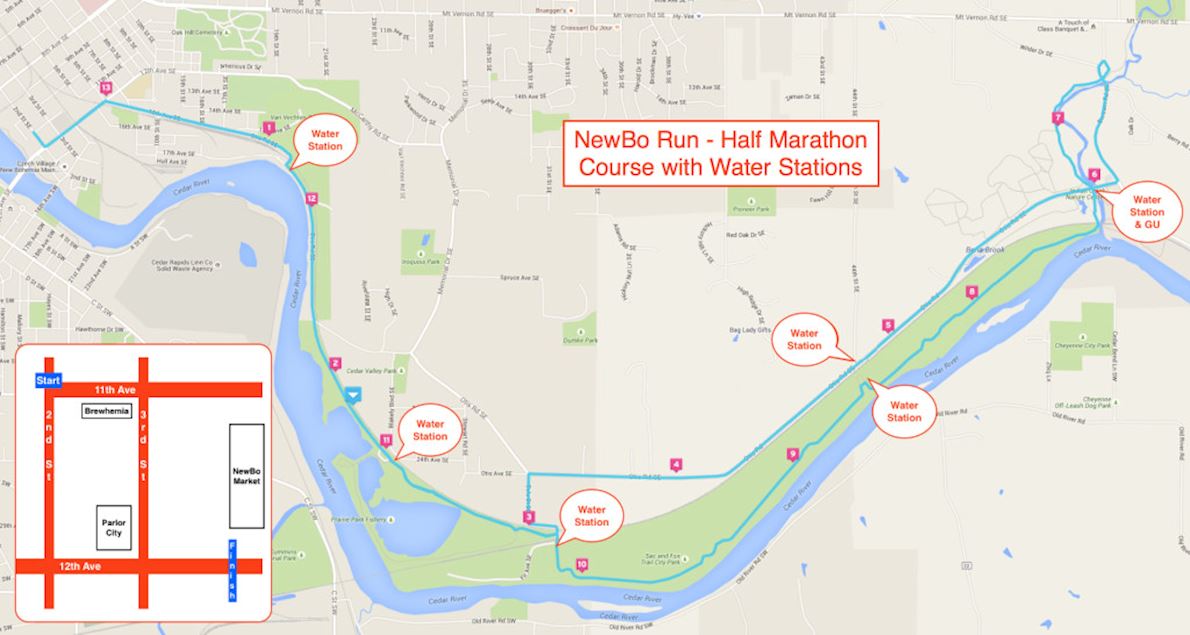 The half marathon course starts and finishes at the NewBo Market. Participants will run up 12th Ave and make a right on 15th Ave/Otis Road by Metro High School. You’ll continue on Otis Road which parallels the Cedar River. Around 1.6 miles, you’ll enter into Prairie Park Fishery. Around 2.3 miles, you’ll come to the first water station in the parking lot. From here you’ll continue onto the paved trail and head around the lake clockwise (stay to the left). Just before the 3 mile marker, you’ll keep left and head out of Prairie Park via a connector trail to Cole St/Fir Ave. There is a water station before you turn left and make your way up the Cole St hill. Don’t worry, it’s short!

At the top of Cole St, you’ll take a right on Otis Road and the next 3 miles are rolling hills with one water station at the intersection of 44th St. (mile 4.7). Continue straight and near the Indian Creek Nature Center you’ll come to another water station at mile 5.8. From here, you’ll turn left onto Bertram Road and go over an old blue bridge. Just pass the bridge is a parking lot and also the halfway point.

At the end of the Sac and Fox Trail, you’ll come upon the connector trail again and head back into Prairie Park after the mile 10 water station. The parking lot will have the same water station which is the last one. From the parking lot, you’ll retrace your way back out of Prairie Park to Otis Road. From there it’s a sprint back to the NewBo Market and the post race party!