https://www.navyhalf.com
Email has been sent!
menu

Washington is the showcase of American arts, home to such prestigious venues as the National Theatre, the Kennedy Center and the Folger Theatre. Jazz music has a storied history here. In the early 20th century, locals such as Duke Ellington climbed on stages along U St NW, where atmospheric clubs still operate.

Alongside the museums, Washington’s monuments bear tribute to both the beauty and the horror of years past. They’re potent symbols of the American narrative, from the awe-inspiring Lincoln Memorial to the powerful Vietnam Veterans Memorial to the stirring Martin Luther King Jr Memorial. With that being said, the Navy-Air Force Half Marathon is the place to be.

VOTED ONE OF “THE YEAR’S BEST HALF MARATHONS” BY RUNNER’S WORLD MAGAZINE.

More than 6,000 runners cross the finish line in both races combined each year at the Navy-Air Force Half Marathon and Navy 5-Miler, which unfolds along the fast, flat streets of Washington, D.C., and takes runners past several of the city’s signature sights, including the Washington Monument, the Lincoln Memorial and the National Mall.

Both events follow out-and-back courses that start and finish in the shadow of the Washington Monument, at 15th Street, between Constitution Avenue and Madison Drive.

From there, the race winds first around the northern end of the Tidal Basin and then along East Potomac Park, and then a 3 1/2-mile-long stretch along the Potomac River.

That’s followed by a long stretch along the Rock Creek & Potomac Parkway, past the Watergate Hotel and Roosevelt Island, through Georgetown all the way up to where the parkway splits with Beach Drive. Once runners make the turn to head back in the opposite direction, they follow the parkway south all the way back to the Lincoln Memorial.

There, runners will cross the Arlington Memorial Bridge for a quick out-and-back stretch, and then head east along Independence Avenue.

Once they’ve made it past the Tidal Basin across from the Jefferson and Franklin Roosevelt memorials, runners will turn left to get back onto 15th Street and then cross the finish line back where they started, in front of the Washington Monument. 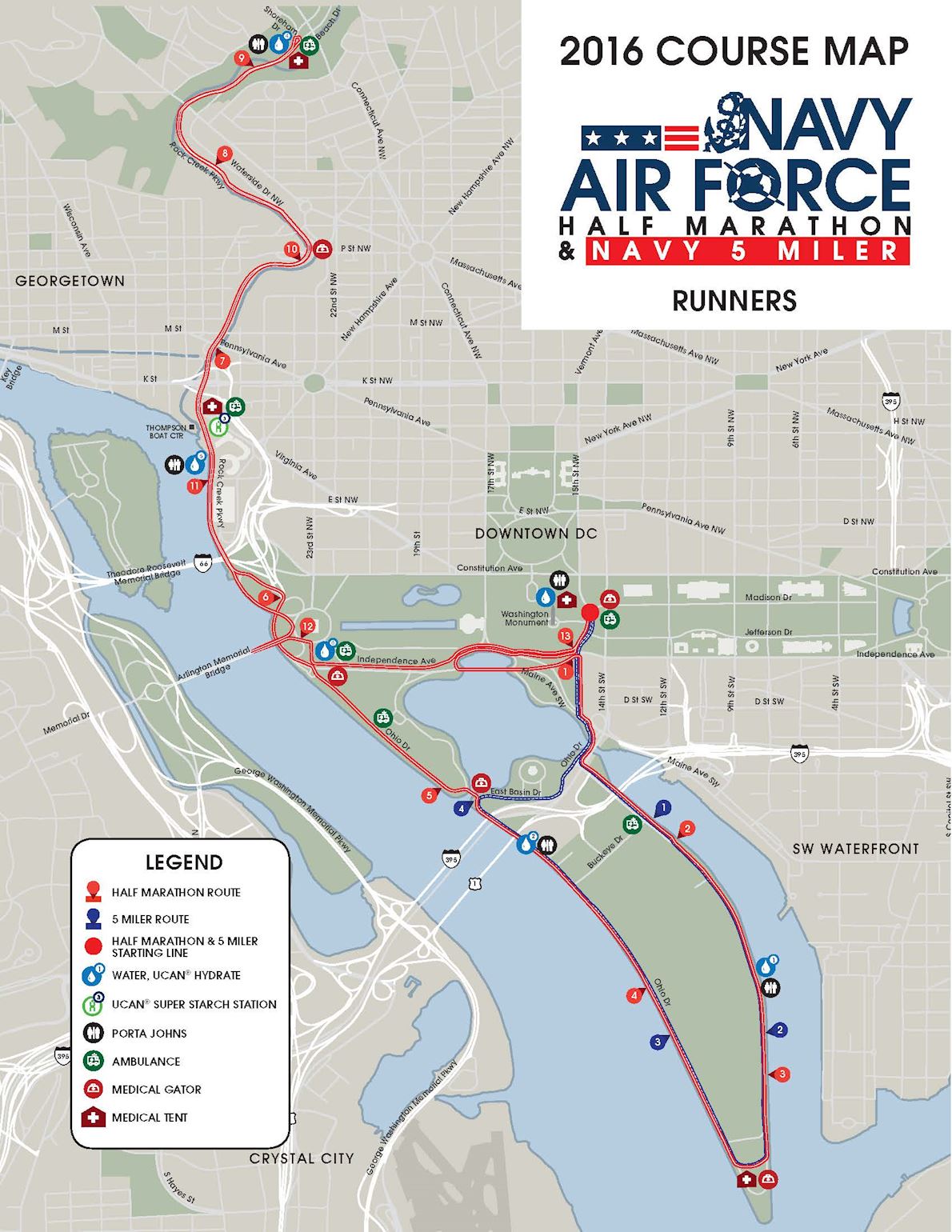 Post-race food and beverage will be available for runners only after the race.

All runners will receive a finisher medal after they finish the race. All registrants will receive their complimentary event shirt when they pick-up their packet. Shirt size must be indicated when registering for the race. Recognizing the winners of a competition is important. Awards are presented on the Award Stage at the Village, located by the Washington Monument. The Joint Base Anacostia-Bolling Commanding Officer takes the stage to congratulate and honor the best of the Navy-Air Force Half Marathon and Navy 5 Miler. Awards will be presented to the half marathon and 5 miler male and female winners (1st, 2nd, & 3rd) in the following categories: overall, masters, and wounded warrior. First place awards in each of the timed and scored team categories will also be presented. Age group winners and 2nd & 3rd place teams must pick-up their awards at the awards tent after the race. There will be no duplication of awards.

A tent will be provided, for runners only, to check personal belongings, such as, small bags, keys, clothing, etc. No valuables or backpacks. All items must be placed in a clear bag that will be provided at packet pick-up. Runners assume all responsibility for items checked. The Navy-Air Force Half Marathon is not responsible for any lost, stolen or damaged items.

The Navy-Air Force Half Marathon and Navy 5 Miler adheres to a strict timeline for the start, on-course, and finish times of the event. The official race clock will be tracked by race officials. Announcements will be made as time nears the closing of the starting chutes. If you miss the start of your wave, you will not be allowed to start until the next wave. Half marathon participants who miss the half marathon start may join the 5-miler participants. It is the participant’s responsibility to be at the start of their wave. No refunds will be issued for missing the start. All runners will need to complete the race by 11:00 AM, organizers note, which means they’ll need to keep a pace of at least 15 minutes per mile or faster. 3.5 hour time limit.

Street Parking – Street parking is available around the Washington Monument area. The driver is responsible for following parking signs and paying any rates. Depending on the time you arrive, you may have to walk some distance, an excellent warm-up for the race. DC Meter Rates and Hours of Operation Map The Ronald Reagan Building parking garage is open 24 hours to the public. It is located on the corner of 14th St and Pennsylvania Ave, the closest parking garage to the start/finish of the race. Reserve your spot for race morning with Parking Panda online reservation services. Guaranteed Parking –To make parking easy and stress free, we have partnered with Parking Panda, the nationwide leader in online parking reservations, to allow you to search and reserve parking before your trip or on the go. View real-time availability and pricing at many convenient locations within easy walking distance to the start/finish lines. Simply update the calendar to fit your schedule and view parking.

Finisher Pix is the Official Photographer for capturing your exciting moments at the Navy-Air Force Half Marathon and Navy 5 Miler. Runner photos will be taken along the course by professional photographers. Bib numbers must be worn on your chest so that you can be identifies in the photos. Runners will be notified 24-48 hours after the event by email when pictures are ready to be viewed.