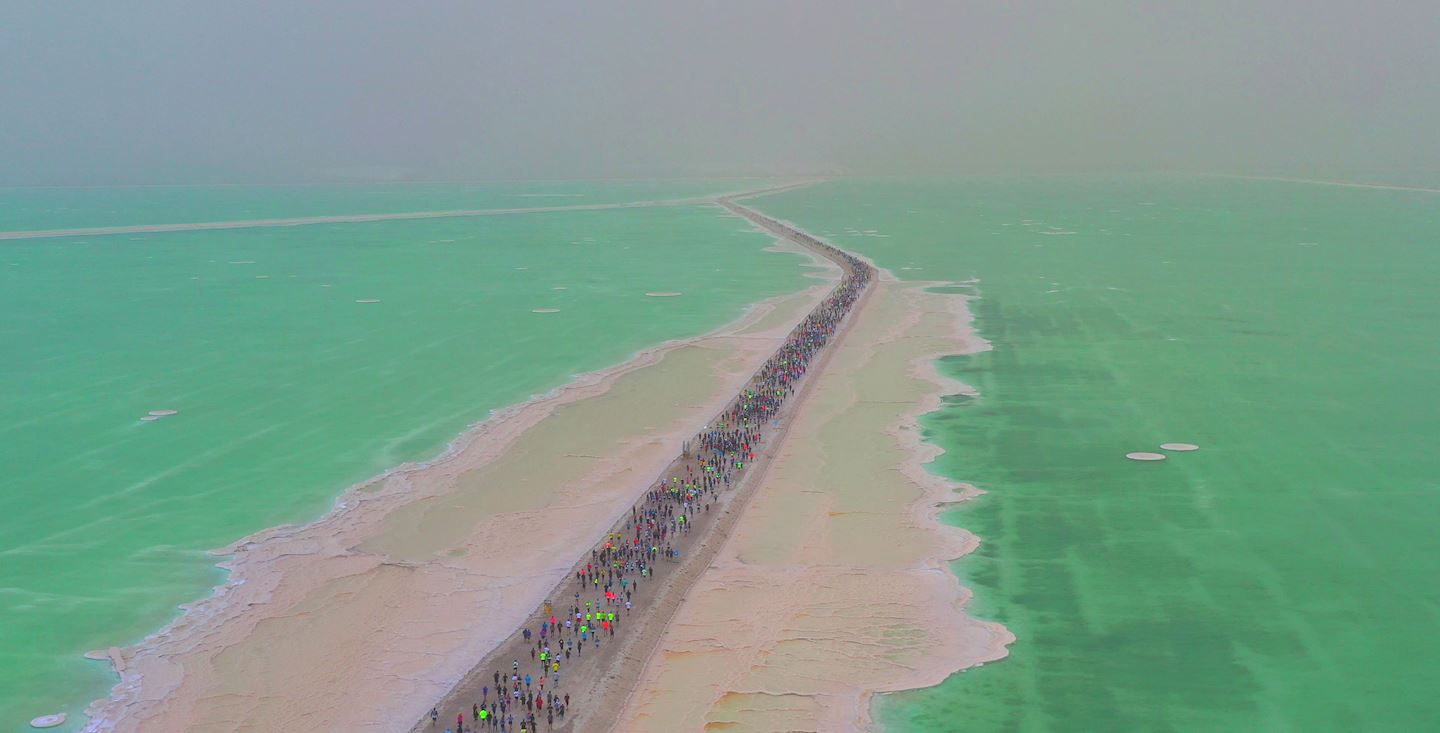 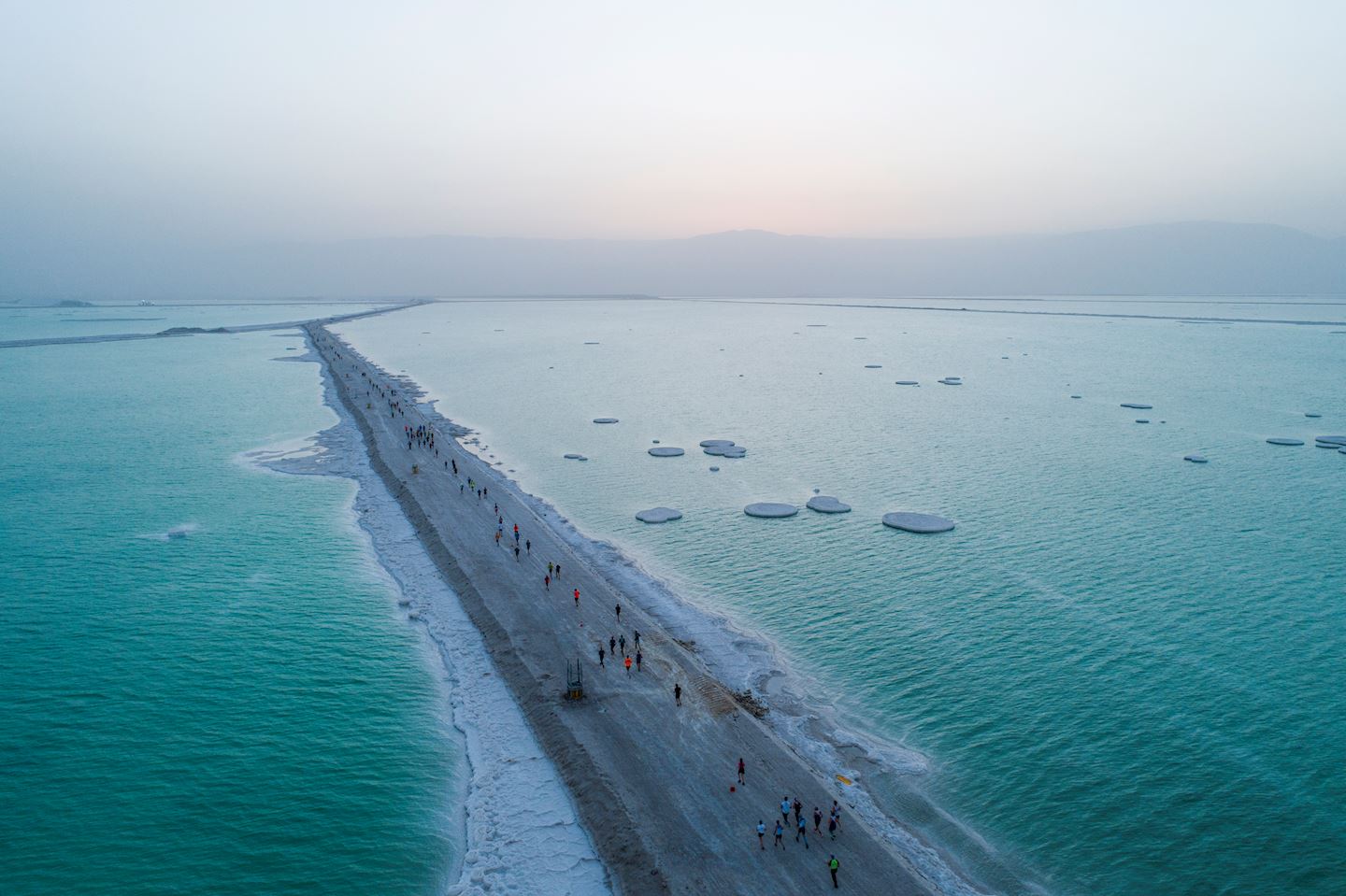 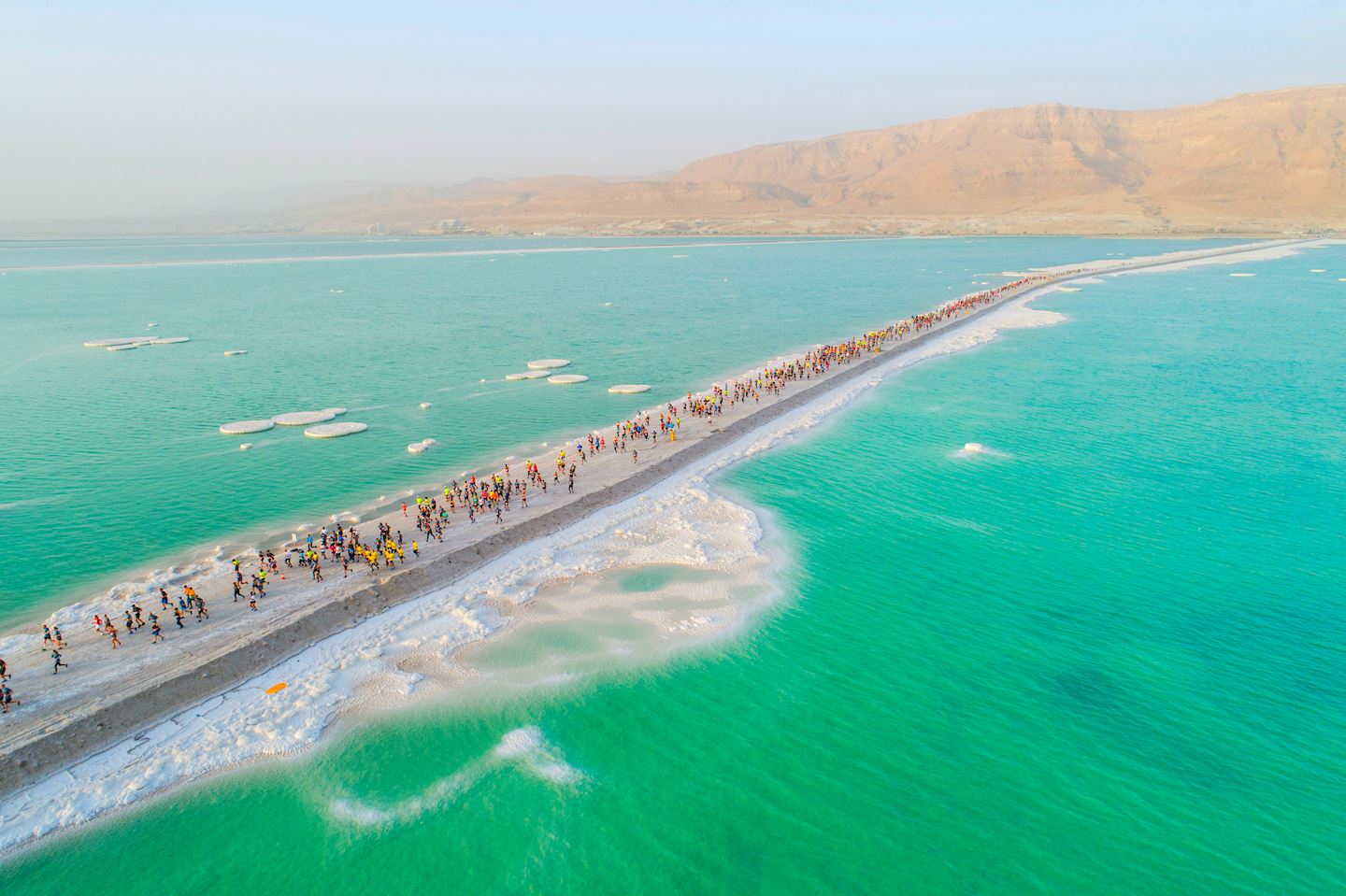 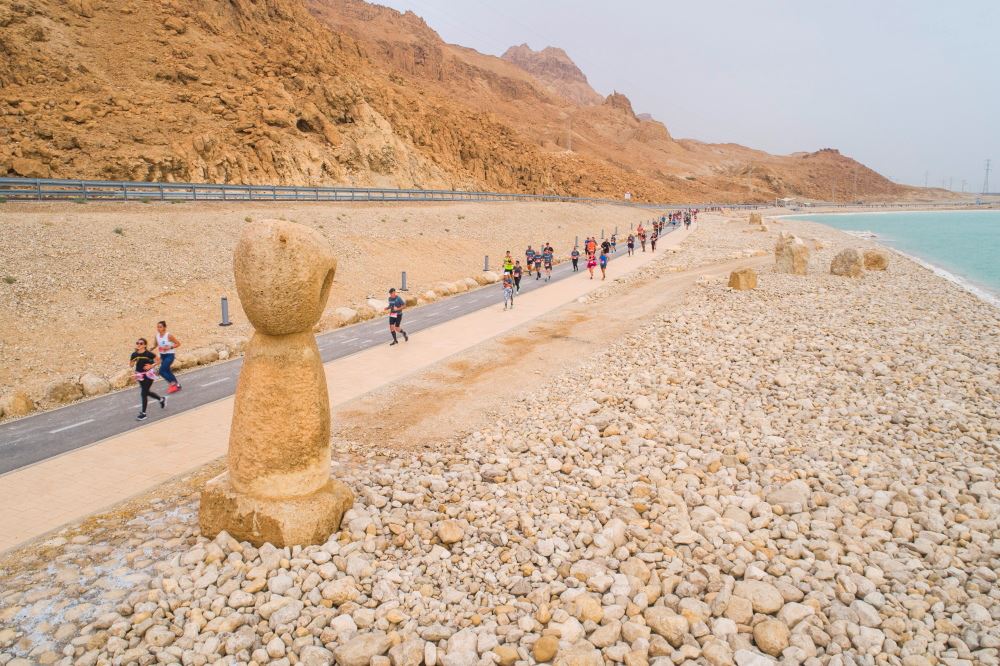 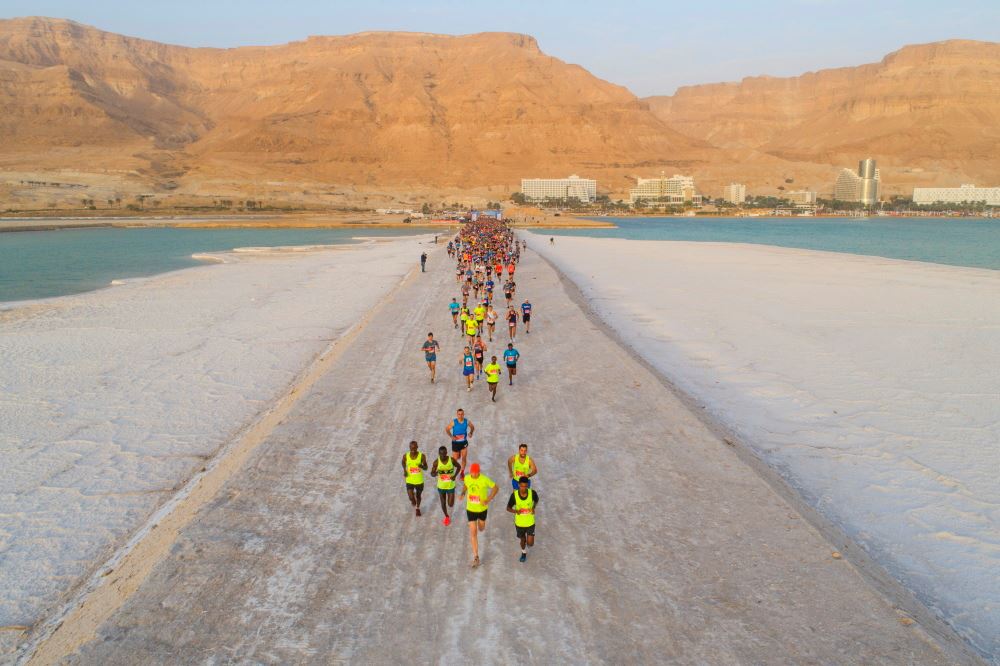 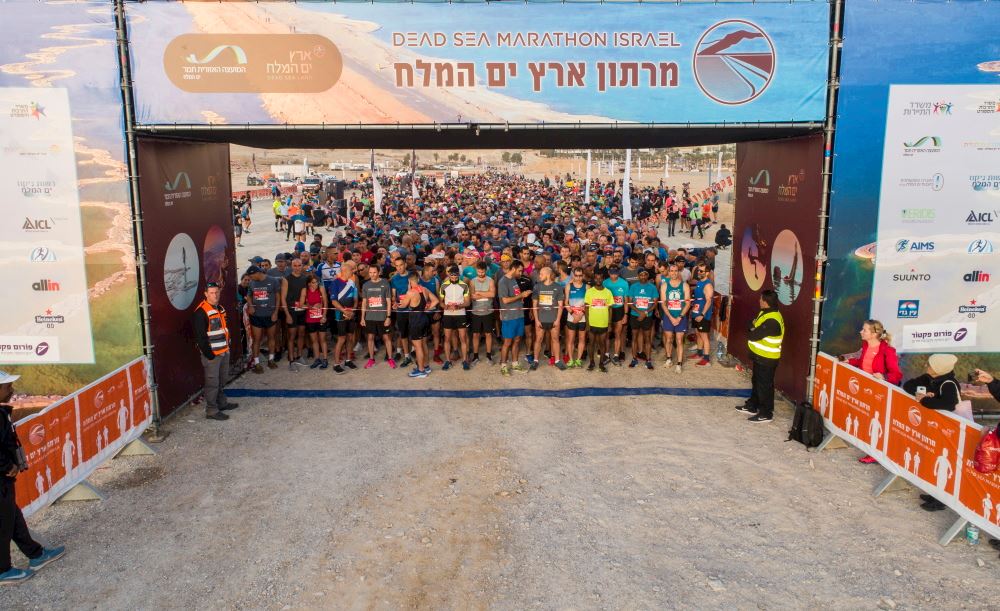 Running on the water at the lowest point on earth

5KM – Convenient route for those who are new to the running experience
10KM – running along the new Dead Sea Promenade.
Half Marathon – a fast and flat route out on the dike of the Dead Sea, in memory of Tomer and Giora Ron.
Dead Sea Marathon – fast race around the shores of the southern Dead Sea up to 21 km on the dike.
50km Ultra Marathon – 50km Israel Championship in co-operation with the Athletics Association.

The highlight of the race is a run towards the sea on the border embankment of the Dead Sea Works that surrounds the southern part of the Dead Sea. Only once a year due the security forces permit use of the dikes for sporting purposes and this gives the runners the opportunity to discover breathtaking views that have so far been observed by employees of the Dead Sea factories or security personnel.

The dike serves as the border area between the Israeli Dead Sea and the Jordanian Dead Sea and serves as a barrier without a fence between the two countries that maintain a common and peaceful daily routine. The route mostly takes place on a dense and flat graveled area and will be secured by the security forces and the army.

The race takes place with the assistance and support of the Israel Chemicals Company, the Dead Sea Drainage Authority and the Government of the Dead Sea Protection Company.

Vacation Packages – Special benefits for runners at a variety of Ein Bokek hotels, including one-night packages. Some of the hotels have medical centers specializing in healing tourism.
A Weekend full of fun activities – free kids race, sunset yoga, afterparty on Friday and a Saturday muscle relaxer run.
Sport EXPO – an excellent fair with all the renowned sports and lifestyle brands.
International Event – a colorful event alongside hundreds of runners from around the world.

Tamar Regional Council and Forum Productions invite runners to take part in an international event running around the Dead Sea, alongside ancient salt crystals and facing the magical and quiet desert scenery.

Course profile
flat
Course surface
Mixed
Other tags
Beach
Desert
Nature
Scenic
Point to Point
5000-9999 Participants
Fun
Course highlights
The fourth edition of an event that has already become a tradition – a one-time running experience at the lowest place in the world, crossing the sea on flat dirt embankments in the desert, with stunning desert landscape alongside professional production and track management values and a well-renowned tradition of excellence.
Read More Show less 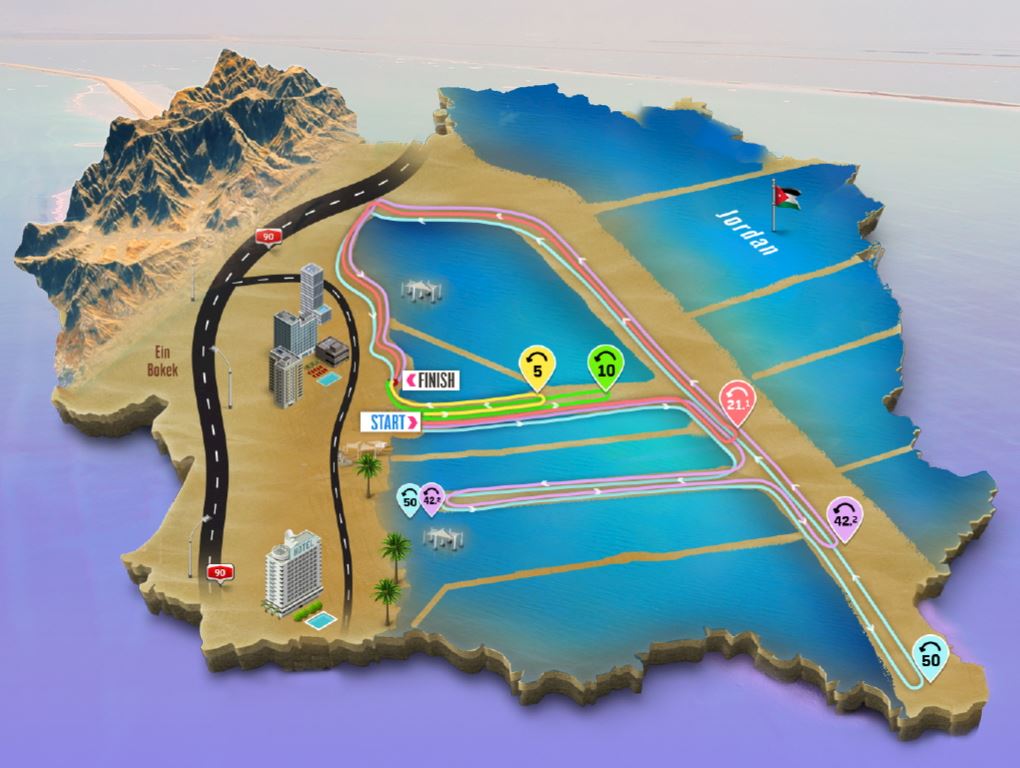 Race kit distribution booth will operate at the race’s EXPO on Thursday February 2 (The day before the race), 4pm-9pm, and on the morning of the race at the gathering area.

Yes, you need a copy of the runners ID and registration number.

The race is located in Ein Bokek a 2.5 hours drive from Tel Aviv. Race organizer offer coach service at the morning of the event from Tel Aviv and Jerusalem.