See other Ultra Marathons in March

In 1993, Doug McKeever and Richard West invited their ultrarunning friends to join them on a favorite training run around Chuckanut Mountain, south of Bellingham. Twenty or so people participated that first year and the feedback was sufficiently positive that the run has continued and grown into an annual ‘fun run.’ The original course was about 33 miles and had sections of highway and some private property. They settled on a 50 km (31.1 mile) route in 1995. In 2002 Doug and Richard decided that they would like to pass on the race directing responsibilities after putting on 10 very successful Chuckanut Mountain 50 km trail runs. Krissy decided to ensure the future of the Chuckanut 50 km as it was her first ultra experience in 2000. After a few years of threatening to change the course Krissy committed to the current course as a dedication to her friend Dave Terry who passed fall of 2009.

Race Sponsors and Supporters create a festive finish line to welcome you back to Fairhaven. Bring dry clothes to change so that you can hang out and cheer in other runners. We will provide soup from Book Fare Cafe, bread from Great Harvest and drinks, all served by Ma Moehl.

There are five aid stations minimally stocked with the basics at miles 6.3, 10.5, 13.4, 20.5, and 24.6. It is mandatory that you carry at least one water bottle. In an effort to make this race more environmentally sound we are minimizing trash. There will NOT be cups available at aid stations; instead we will provide water pitchers to easily fill your bottles or collapsible race cups. It is suggested that you also carry special food needs, because aid stations will be stocked with basic race foods.

With the new start location we will have a better parking situation right at the start (6th & Harris). We strongly urge you to carpool and arrive early to avoid parking lot traffic backups. 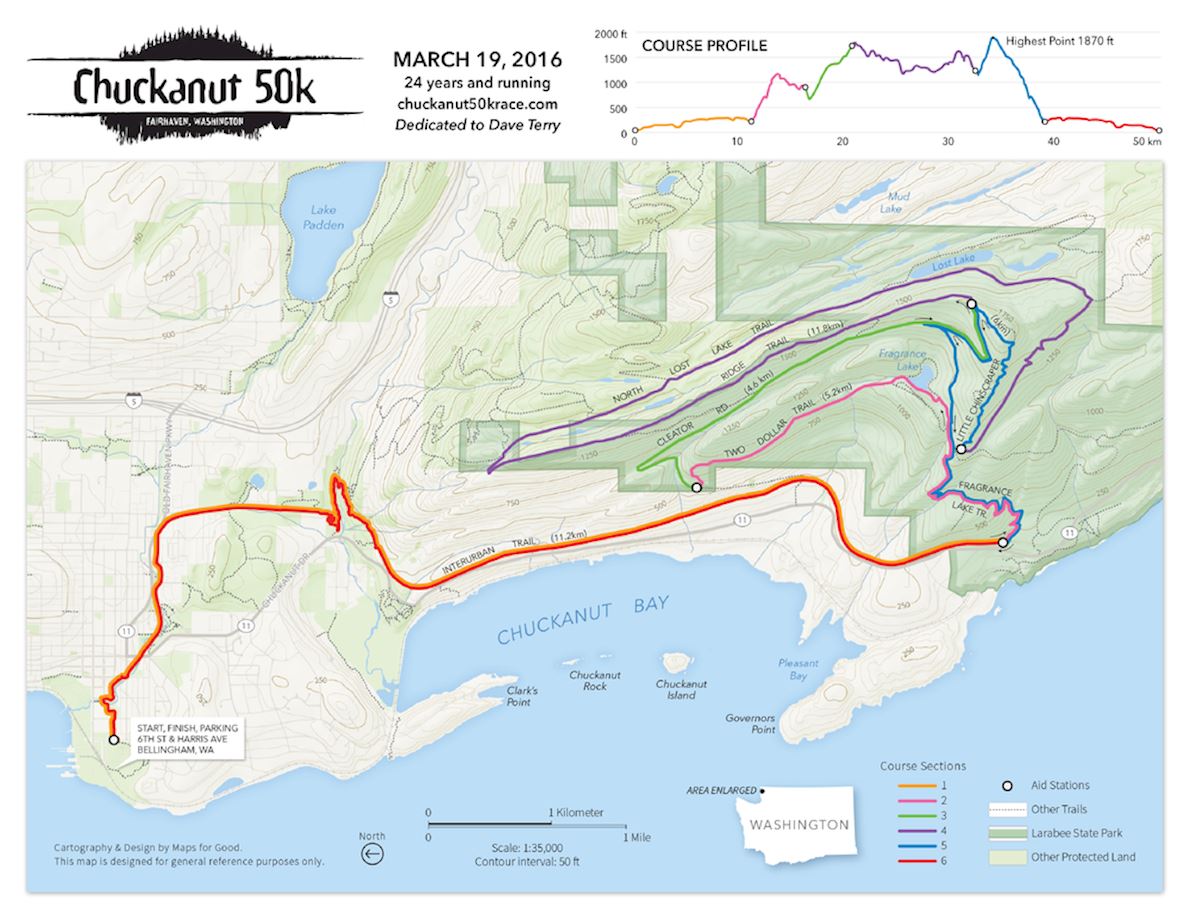 An out and back on the Interurban Trail make up the first 10 km as well as the last 10 km. Sandwiched between these relatively flat miles runners will enjoy a climb up the Fragrance Lake Trail, a descent to Cleator Road on 2 dollar trail, then climb Cleator Road (dirt, occasional traffic) to the beautiful Ridge Trail, Lost Lake Trail (muddy), Cyrus Gates Overlook, and back down to the Interuban Trail via Cleator Rd. and Fragrance Lake Rd. The Interurban Trail that warmed you up in the morning will be waiting to finish you off for your finish.