The long-awaited new race in the Adventure Marathon series is finally here! We’re pleased to present the newest addition to our series of challenging adventures: The Bagan Temple Marathon! Tucked away in central Myanmar, the ancient site of Bagan will be the location of the newest Adventure Marathon. Home to more than 2,000 temples, Bagan’s beauty and historical significance is unsurpassed. Sacred pagodas and beautiful temples are scattered across the plains of Bagan creating a mystical, stunning landscape. The marathon course will take runners on a voyage of discovery into this alluring and untouched land. Welcome to the Bagan Temple Marathon.

There will be water stations along the route, some stations will also serve energy drinks and bananas. Personal supplies can be deposited at certain water stations.

The time limit is seven hours from the start. Further more, full marathon runners have a five hour cut-off at kilometer 27 near Water Station 7. All runners who doesn’t make the cut-off time or the time limit will be picked up and driven to the finish line.

Timing is done manually with internationally approved stop watches. Result lists will be published at the celebration dinner the following day and online as soon as the local internet connection allows it. 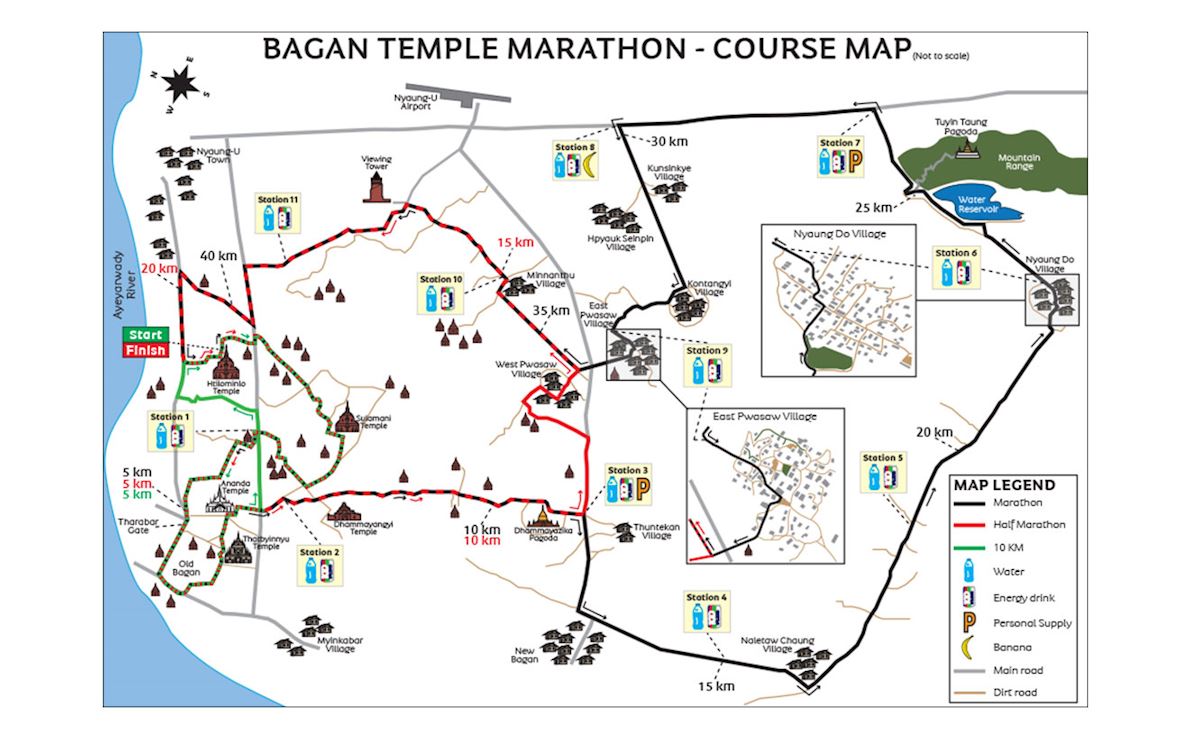 One of Myanmar’s main attractions, this is a temple town. The area known as Bagan (ပုဂ) or, bureaucratically, as the ‘Bagan Archaeological Zone’, occupies an impressive 26-sq-mile area, 118 miles south of Mandalay and 429 miles north of Yangon. The Ayeyarwady River drifts past its northern and western sides.

The Bagan Temple Marathon starts and finishes at Htilominlo Temple, built in 1211 and known for its fine plaster carvings.

The beginning
After the start, the first 5km are run on dirt roads through the plains of Bagan towards Old Bagan. Runners will be treated to magnificent views of thousand-year-old temples and pagodas.

The course continues on asphalt for about 1km before hitting the dirt road again as runners carry on across Bagan. The next 5km are on dirt roads.

10K runners follow the same route as the full and half marathons until the course reaches Old Bagan where they turn back to Htilominlo Temple and the finish line.

As you reach the 11km mark and the water station there, you pass the Dhammayazika Pagoda. At this point, the full and half marathon runners part ways.

Half Marathon runners
Half marathon runners continue 1km on an asphalt road until they take another left onto dirt tracks which lead into the small village of West Pwazaw. After passing the village and roughly 2km later, the route crosses paths again with the full marathon course.

Marathon runners
The full marathoners turn right after the Dhammayakiza Pagoda at the 11km mark. They carry on towards New Bagan, but instead of entering New Bagan, runners continue onto a sandy path and enter what feels like a different realm. The course takes runners on a journey of discovery. See ox carts laden with grain plodding on the sandy track. Wave to farmers tending their rice and peanut fields. Be prepared to high five gaggles of children decked out in their festive clothes waiting to say hello. It feels like time has been standing still in this remote corner of the world.

At 22km, runners enter the beautiful Nyaungdo village. The surface is now back to being a dirt road and the course continues onto a dam with the view to the right of a stunning mountain-top pagoda, Tuyin Taung Pagoda. To the left, the palm-fringed fields lie below and the spires of Bagan’s temples shimmer in the distance.

From 26-30km, runners continue on an asphalt road which is not closed off to traffic, so remember to keep to the left. The route continues onto a dirt road and through the fields until another village is reached. The course takes you through East Pwazaw village where the residents are likely to be outside their homes and cheering you on! This small village with its palm-leaf roofs and warm residents will undoubtedly give you a boost of energy to carry on.

After West Pwazaw village, the course continues through the plains of Bagan and runners are again rewarded with views of the historic temples. At this point, the surface becomes asphalt for about 1km before reverting back to dirt tracks again. The final stretch is a mix of dirt and asphalt surfaces before the long-awaited finish line is in sight back at Htilominlo Temple.