The story began back in October 2008 in London. Gauhar Bramley-Fenton (the Astana Marathon founder and Race Director) came to support the Air Astana runners, a mix ability group who completed the Royal Parks Half Marathon in London. The team finished the gruelling 13.1 mile course and were greeted by Gauhar and Saule Kudaibergenova. The idea of organising the Astana Marathon was born on the grass of Hyde Park over photographs and conversations.

That year, a well-coordinated and ambitious group was formed with one goal in mind - Nur-Sultan (former Astana), the capital of Kazakhstan, deserves to host its own annual marathon. Gauhar, Saule, Janar Jailauova (Air Astana) and Gani Toxanbaev (former Credit Suisse Kazakhstan Vice President) were determined to set things in motion. On the 26th of September 2009, the very first charity run in Nur-Sultan greeted athletes with kind weather and collected 972,994.00 Tenge for SOS Children's Villages and Astana Children's Home. For the next ten years, Gauhar continued to organise charity races in Nur-Sultan every year, adding Almaty in 2012 and London in 2013. In total 37,125,458.00 Tenge was raised since 2009 for various Kazakhstani charities.

13 September 2015 was the landmark day in the history of Nur-Sultan - the very first 42.2k in the capital of Kazakhstan.

- to continue improving the event and promote globally Nur-Sultan city and the country as a whole.

- to establish a link between relevant government bodies and the Astana Marathon in order to recognise those Kazakhstani runners who meet Master of Sport or Candidate for Master of Sports of the Republic of Kazakhstan requirements. (fulfilled)

- to support charity organisations and raise much-needed funds for good causes. Also to raise funds for our own charity project One Steppe Beyond. The project aims at spreading the love for running in rural areas of Kazakhstan by setting a series of short-distance races throughout the year, particularly targeting young people.

- to use the Astana Marathon as a launching pad for Kazakhstani citizens completing all six Marathon Majors and getting their names of the Hall of Fame. Currently, there are no Kazakhstani names on the Wall and we are set to change that.

T-Shirt for Marathon runners. Medals for all distance finishers.

Will be provided in Marathon Village

Certain roads will be closed off from 7am till 1pm. There will be no parking available around the Marathon Village area.

Race bibs will be distributed at Astana Marathon EXPO located at the Sheraton Hotel on Friday 4th and Saturday 5th of September.

Water and bananas will be provided at every 5k mark. Isotonic drink will be offered to 42.2k runners. 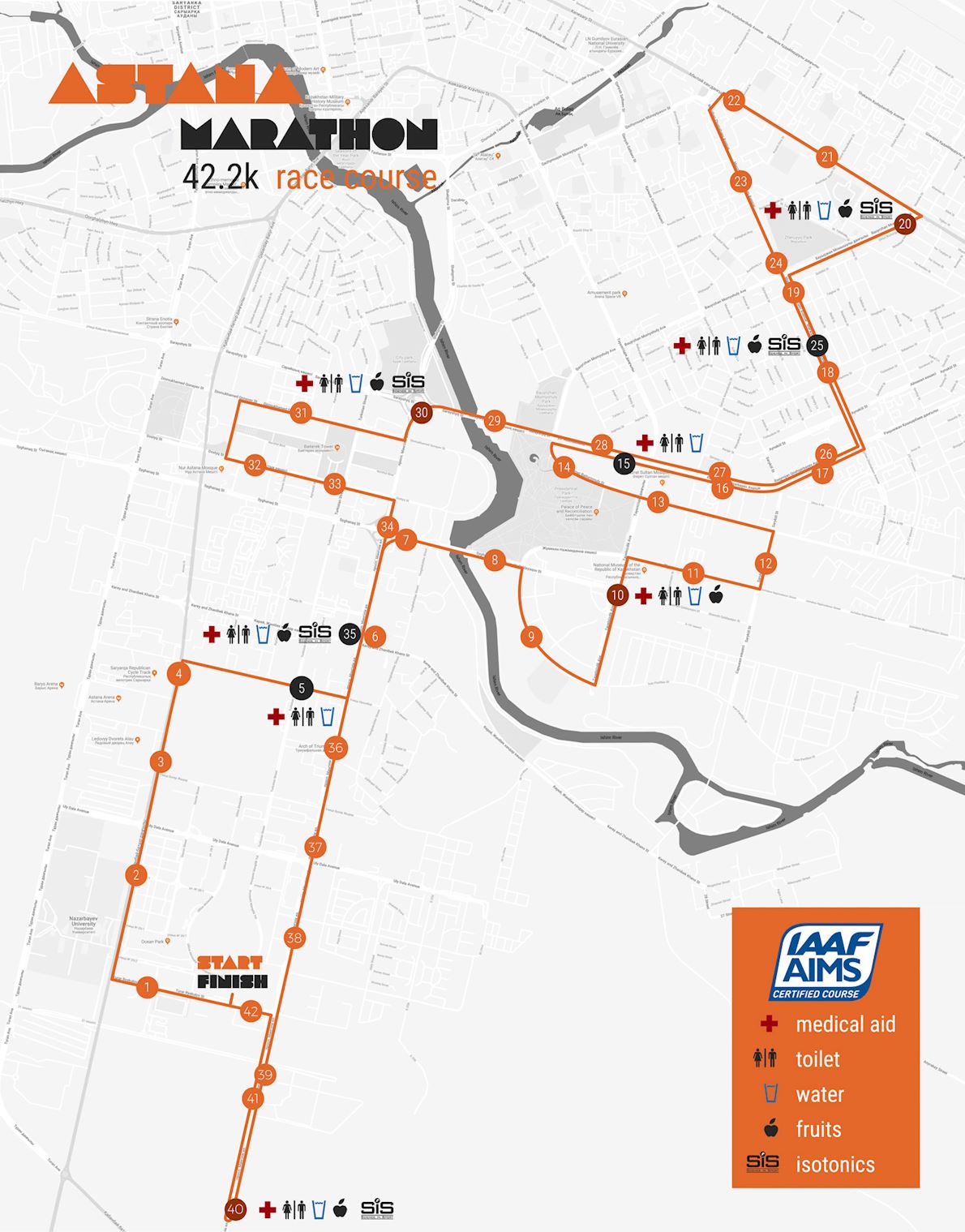