See other Half Marathons in May

The marathon is organized by the initiative of the Heydar Aliyev Foundation, the Seaside Boulevard Department and the Baku Olympic Stadium. The exclusive partner of the "Baku Marathon" project is "Azercell Telecom". The project is implemented by SMG ("Sport Marketing Group").

The goal of the "Baku Marathon" is to support the development of sports, to promote healthy lifestyles, and bring people together around good deeds.
Starting from the State Flag Square "Baku Marathon", it will cover 21 km distance to the Olympic Stadium.

We believe that the "Baku Marathon" will contribute to individual physical health, massive and regular sporting activities and solidarity around good deeds.

As in past marathons, this year will also be installed every 3 km. Medical aid points, sanitary junctions will be operating in the aid stations and water will be distributed.

For the participants of the marathon it is planned to install special stops at 5 points. The participants will be provided with primary medical aid, water and food (fruit and vegetable), sanitary naphtha.

Bag storage service will be located at the start zone of the marathon. Only marathon participants may leave their bags in the storage points. Your bags will be marked with a special sticker when you hand them over. Please, make sure your race sticker is fastened before leaving your bag at the bag storage zone. Your bags will be delivered to the finish line and you will be able to take it after the race is over. Please, take your bag before leaving Baku Olympic Stadium at 17:30, May 5. 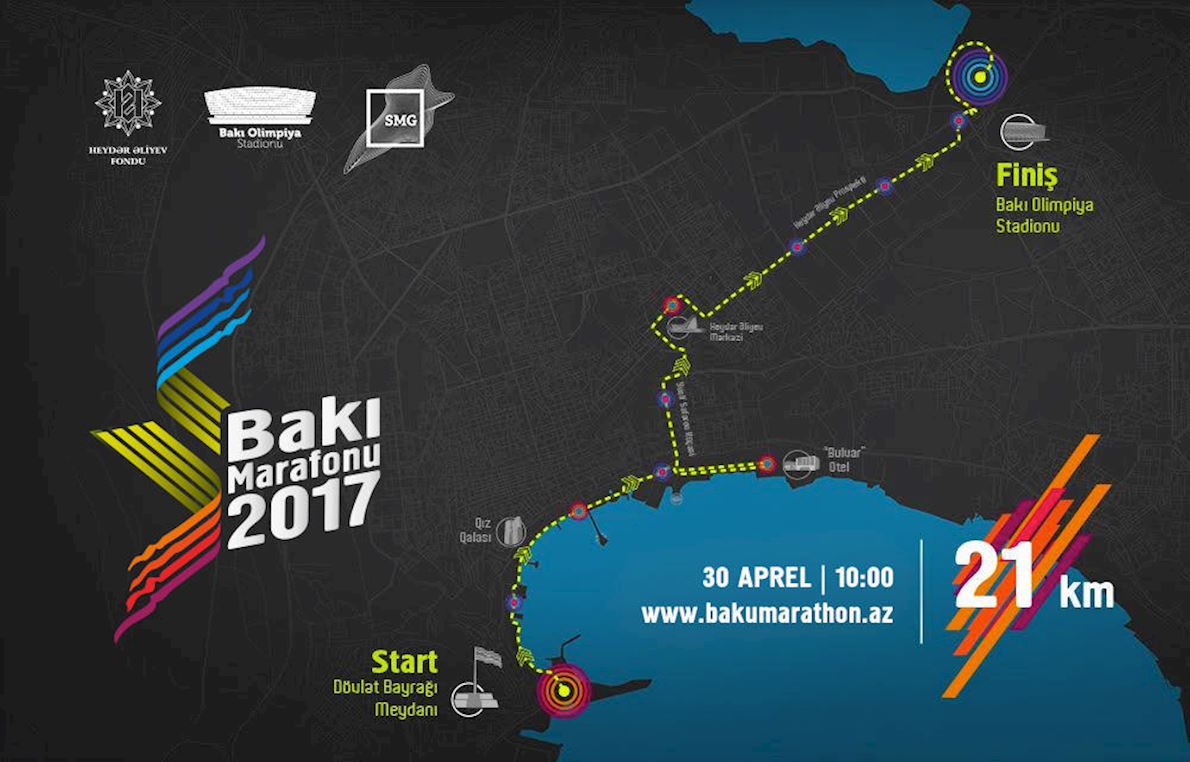 Baku is located on the southern shore of Absheron peninsula. Baku is the largest city in the South Caucasus due to its old age, its size and its population. Shirvanshahs Palace complex, the city's oldest historical symbols, Icherisheher and Maiden Tower, were included in the UNESCO World Heritage List in 2000. Baku was included in New York Times's 52 most populated cities in January 2015.

Baku is the scientific, cultural and industrial center of Azerbaijan. In addition, Baku is also known as the "city of winds." It was reported that at the beginning of last century it was not possible to walk through the streets of Baku with strong winds and dust, and today Baku has become a city with cool air and comfortable lifestyle.

The launch of the National Flag Square, which is the starting point of the route, took place in 2010 and is now considered one of the main sights of the city. The place chosen for the square allows the state flag to be seen from different points of the capital.

The flagstone, which is 162 meters in height, is second in the world according to this indicator. Starting from the start point mentioned above, the participants will travel about 6 km from Neftchilar Avenue starting from the newly built part of the Seaside National Park. This part of the route covers the ancient city (Icheri Sheher, Maiden Tower) and its modern spaces.

After this beautiful contrast and 6 km distance on the back of the coast, the participants will move on Yusif Safarov Street. The final and most difficult part of the route begins after the participants flee about 2 km from this street, where the Museum of Modern Art and the Supreme Court are located. In this part of the route is the Heydar Aliyev Center, which is considered to be one of the pearls of modern world architecture, with a mysterious architectural structure. The building of Heydar Aliyev Center is known worldwide as the symbol of modern Baku and was awarded in June 2014 by the prestigious London Design Museum "Design of the Year 2014".

This final part, which is about half of the marathon distance, continues to the Olympic Stadium in Heydar Aliyev Avenue. The Baku Olympic Stadium, hosting the opening and closing ceremonies of the First European Games, was designed and built in accordance with the international standards of UEFA, FIFA and IAAF. This stadium, which has a capacity of 68700 spectators, was presented in the international press as the Allianz Arena of the Caucasus.

Baku Olympic Stadium is the biggest stadium in Azerbaijan and the Caucasus, the 7th best sports arena in the world.