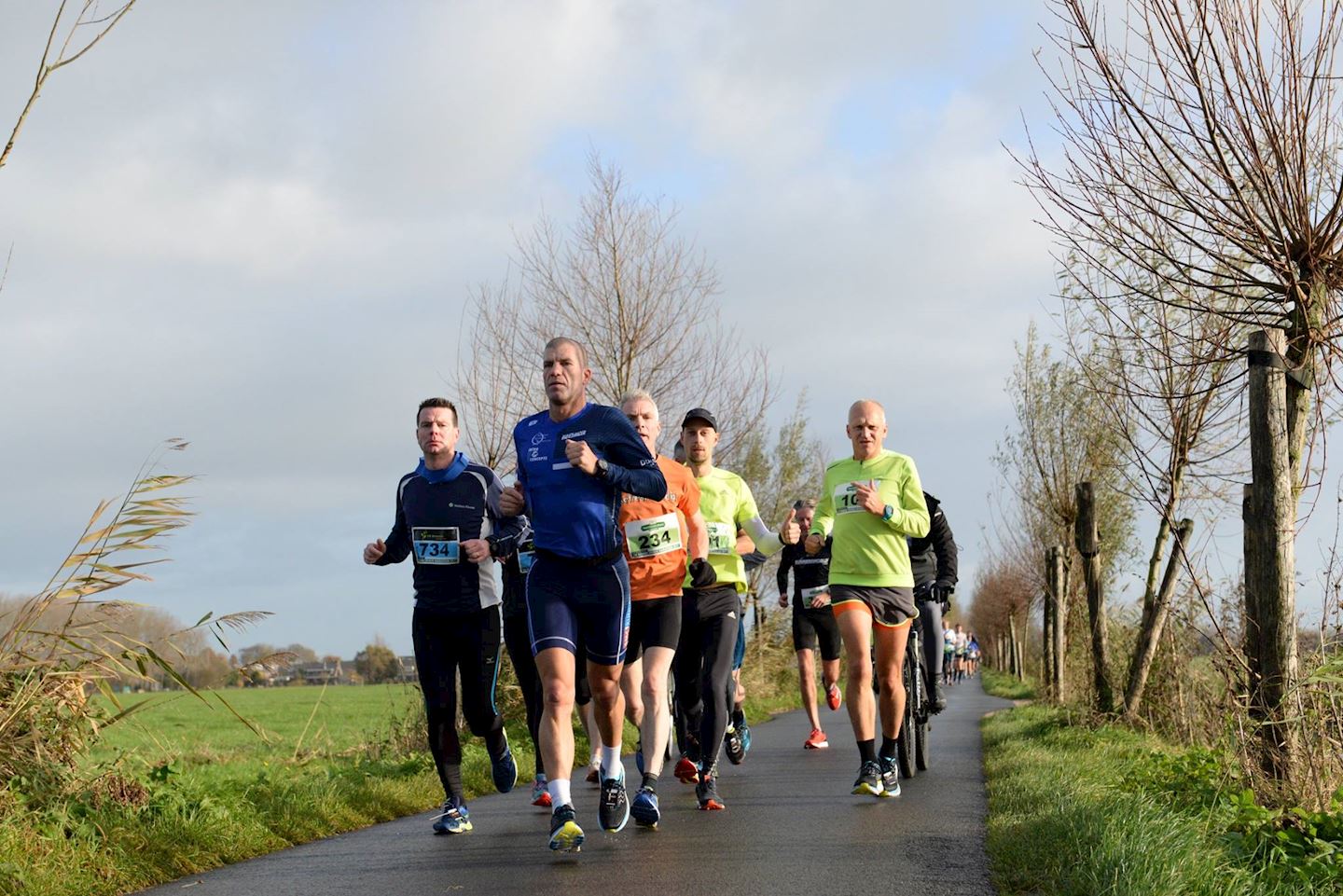 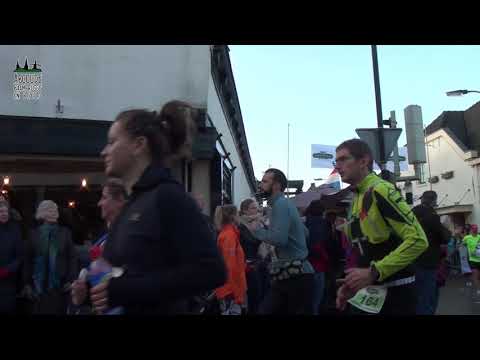 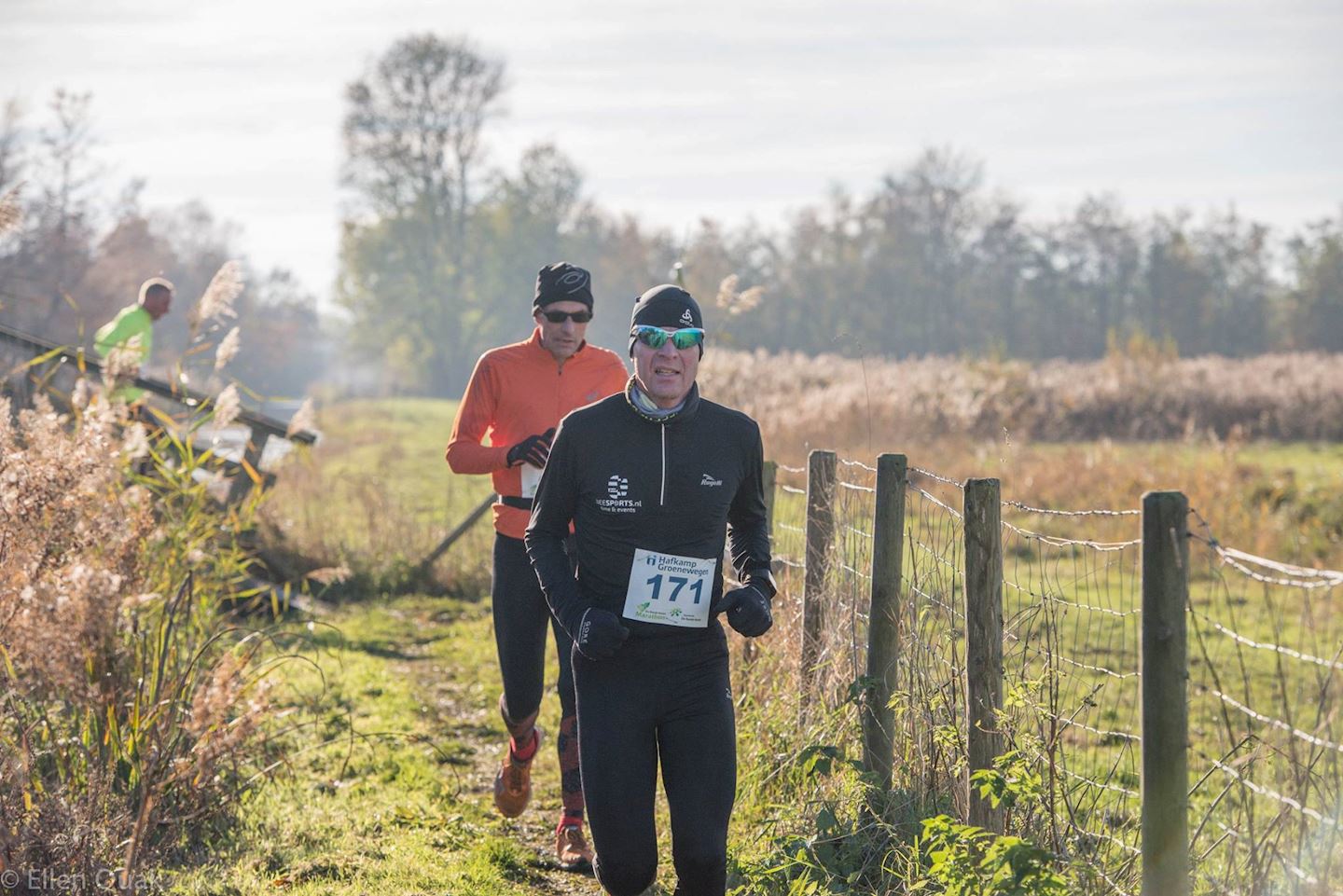 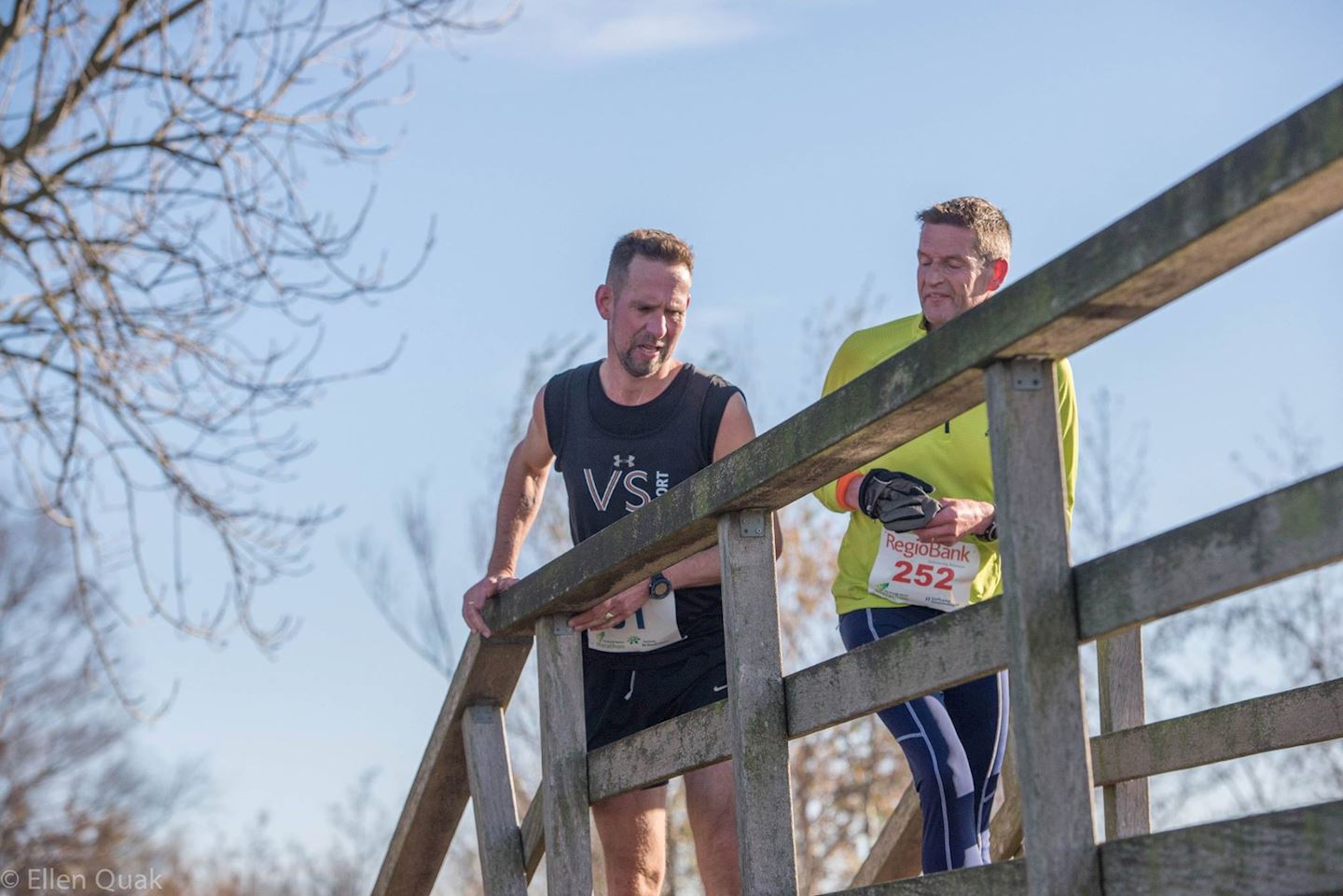 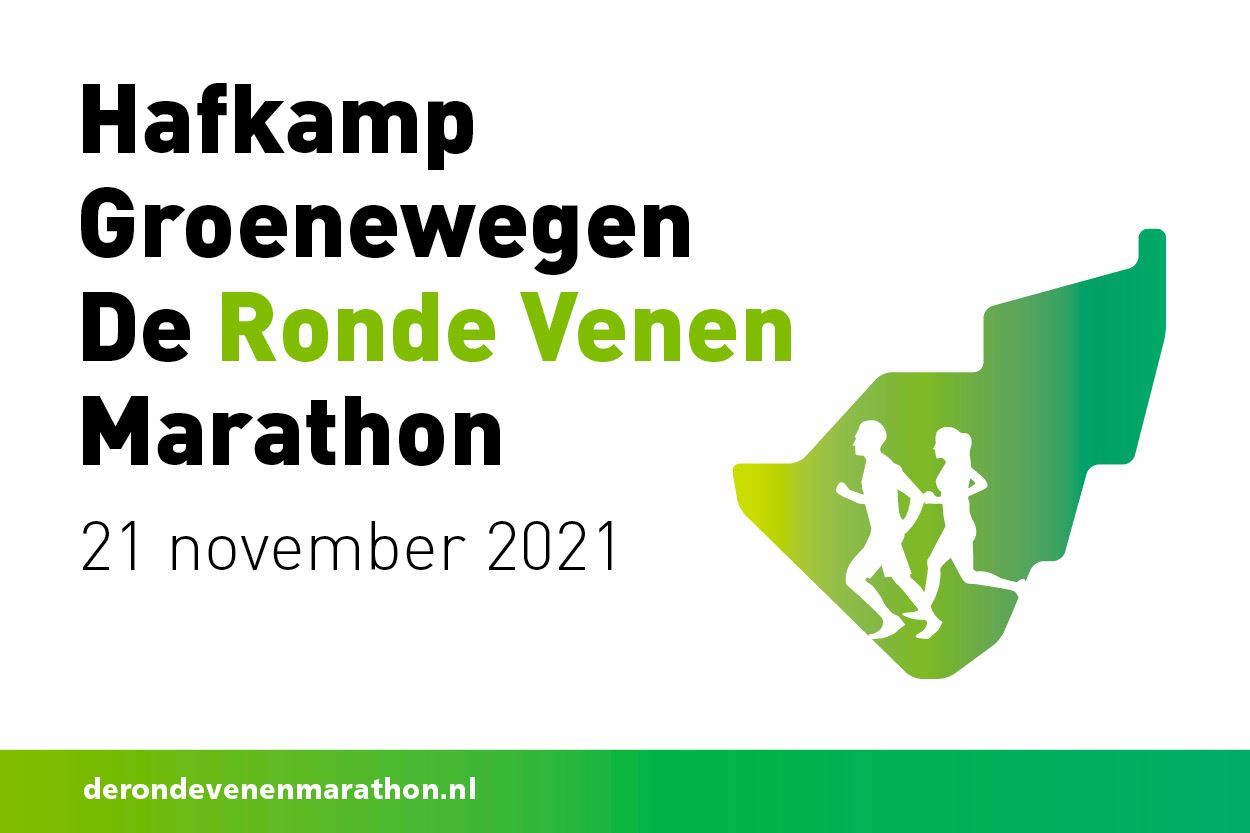 This unique marathon starts and ends in the center of Abcoude and goes through all 8 villages of the municipality of De Ronde Venen. Abcoude is located 3 km south of Amsterdam with excellent public transport.

The marathon has a very varied course along several rivers, through a cattle shed, over a former railway, through meadows and through the Botshol, a nature reserve.

De Ronde Venen Marathon has three distances: the entire marathon, the duo marathon (a marathon for 2 runners, alternating running and cycling) and the 10 km run.

Do you need a bicycle? Let us know.

Register quickly, because there is a limit of 1000 registrations: 400 individual marathon runners, 200 duos and 300 runners on the 10 km run.

You run this Marathon/Duo-marathon on a unique trail. In a large round you will pass all eight villages in the municipality of De Ronde Venen: Abcoude, Baambrugge, Vinkeveen, Wilnis, De Hoef, Mijdrecht, Amstelhoek en Waverveen and back to Abcoude. About pedestrian and traffic-calmed roads, a former railway, along rivers and by meadows and trough a beautiful nature reserve: The Botshol.

Abcoude has a protected village view. A beautiful place for this special event in the historic Centre. With the start and finish on the ‘Molenwegweg’ (at the Eendracht). The trail continues via The Horn to Baambrugge.

Vinkeveen let us enjoy on a quiet cycle path. Two km’s further are the Lakes ' Vinkeveense Plassen '. The tunnel under the bridge in the N201 road brings you to a narrow path over the former track of the railway Nieuwersluis-Uithoorn. The railway in now in use as a walkway. 5 kilometers further is the crossing in Vinkeveen at the former train station. Crossing the canal, the next village is there.

Amstelhoek. The public road crosses a special place: the scrap yard of the company Pothuizen. The track follows the Ringdike. Than through a cow shed andfurther by a tunnel under the N201 road and ends up in the polder of .......

Waverveen. On theleft hand side a view on the Amsterdam Johan Cruijff Arena, the ‘house’of football club Ajax. Just when it get bored after 36 km’s, you will get “the cream on the cake”. The nature reserve The Botshol shows up. 2.5 km’s on grass paths and some bridges along a small river back to

The 10 km run will also start on the Molenweg at De Eendracht in the historic center of Abcoude. The first kilometer passes Abcoude, via the Willem van Abcoude lane, 't Markvelt, Hoogstraat and the Mayor Des Tombeweg, then towards Baambrugge. Via De Horn you will run through the historic Center of Baambrugge towards the tunnel under the A2 highway. Passing the tunnel we turn right, back to Abcoude. The A2 highway is hidden behind the sound screen. Then the track goes again under the A2 in the direction of Abcoude. The last kilometer is going through the village, with the finish in the Center at De Eendracht. 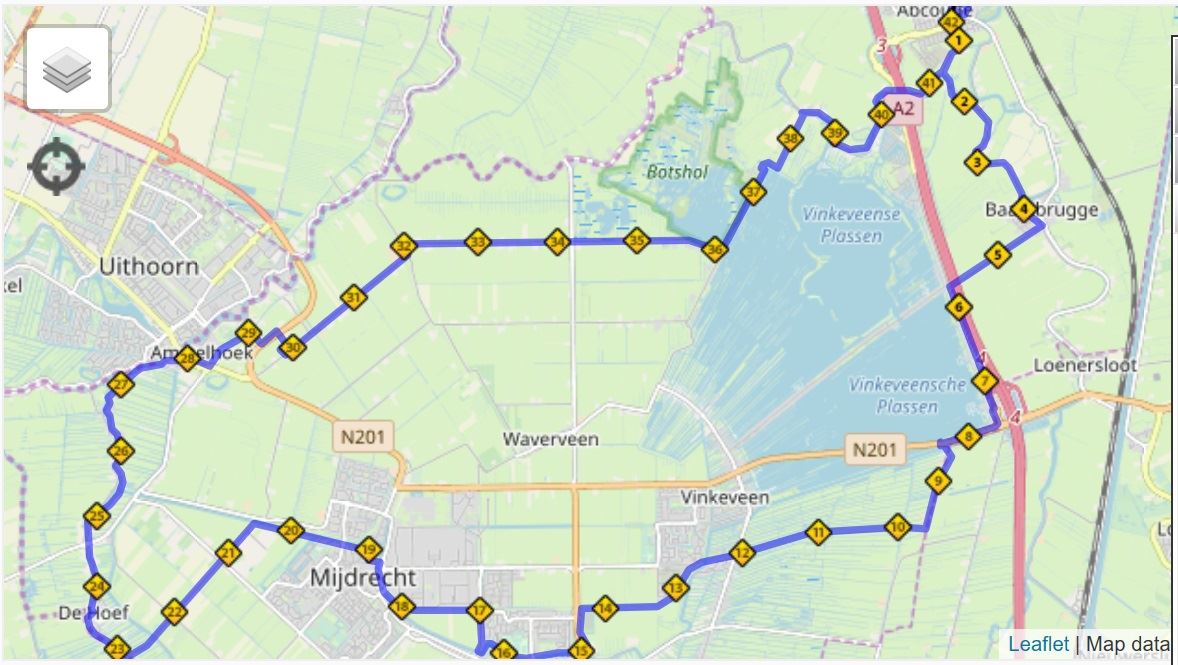 If you are planning to stay overnight in Abcoude, please check “Hotels Abcoude

Along the route, a mobil support team of 7 medical teams and 10 Red Cross voluntiers, will provide professional care at refreshment points along the route . Mobile support is provided by two Motorrad, bikes and cars.

Every runner who reaches the finish line within a timelimit of 5 hours and 30 minutes will receive a finsiher medal.

Storage of your clothing bag in the dressing area: Kees Bon Zaal Holendrecht 55, 1391 VT Abcoude on the day of the event.

Parking space is located in the village Abcoude. Follow the instructions of our parking team

Along the route photo’s will taken and become available on our website.

About every  4 to 5 km refreshments are available.

The time measurement is done by IPICO using a rfid tag in the bibnumber.

Abcoude has good train connections. The train station is located in the city centre and close to start and finishing line.