The medical services of the EDP Rock ‘n’ Roll Madrid Maratón & ½ offered to you during all the races is an integral service to ensure you run the safest way. With the deployment of services by the SAMUR, along with volunteers from our services deployed around the course and in the finish zone, you will have a safe and rewarding experience on the course and in the finish line zone of the EDP Rock ‘n’ Roll Marathon & ½ there will be different support stations where runners can hydrate with water or a POWERADE isotonic drink, and eat solid foods as well such as fruit.Within the Rock´n´Roll EDP travel Madrid Marathon & ½ victualling solid points that will provide fruit to all those requiring extra contribution of energy.

If you need to leave personal items for after the race, you may choose to use our baggage check service. NEW – Baggage drop off and pick up is near the finish line.

To ensure that the roads will open to traffic properly and on time, the following time limits on the races have been established: Marathon: 6 Hours & ½ Marathon: 3 Hours.

.During the EDP Rock ‘n’ Roll Madrid Marathon & ½ you will use the bibs “MYLAPS BibTag” for comprehensive monitoring of your time. On the back of your Race Bib you can find a chip (Tag) and a foam pad. 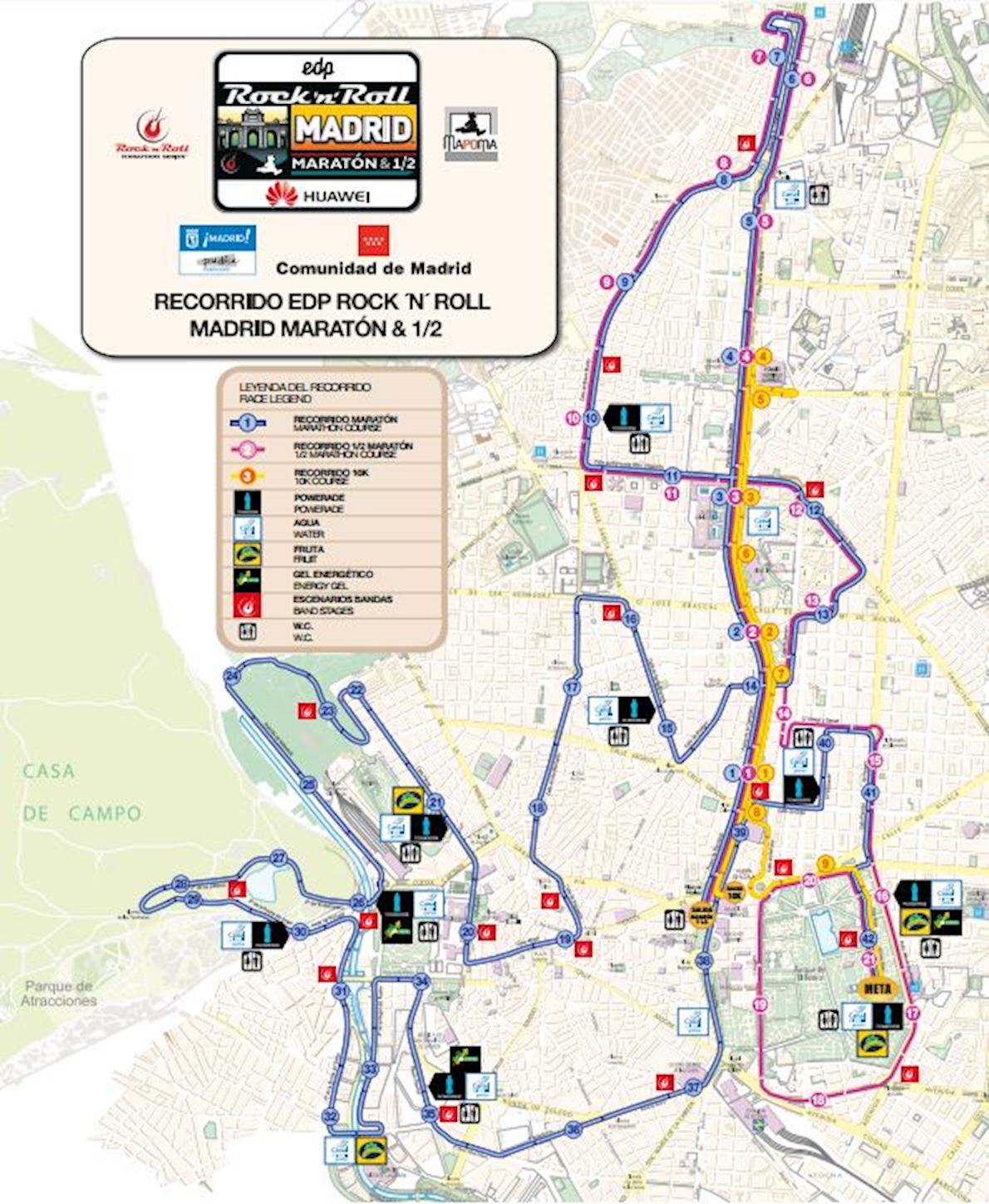 As always, the Madrid Marathon takes in many of the fantastic sites of Madrid. Starting from Plaza de Cibeles, Marathon runners will be taken through the city centre, the old town and Madrid's residential areas, passing famous landmarks on the way, such as Puerta del Sol, Plaza Mayor and Palacio Real. Runners reach the finish line in Madrid's Retiro Park.

The race course begins near Paseo de Recoletos and heads north past the Biblioteca Nacional de España, then the Santiago Bernabéu Stadium. After 8 kilometres the route turns southwards and heads back towards Nuevos Ministerios. Runners then follow a twisting south-westerly route. After passing Plaza Mayor, it goes north past the Royal Palace of Madrid and reaches the half marathon mark at Parque del Oeste. After exiting the park, it traces a path south for a few kilometres and includes a six-kilometre loop within Casa de Campo. After a section which loops back south and north, the course heads east towards Madrid Atocha railway station. It runs along the perimeter of Buen Retiro Park and finishes inside the park at Paseo del Duque de Fernán Nuñez.