The Turin Marathon (Italian: Maratona di Torino Gran Premio La Stampa) is an annual marathon race which takes place in Turin, Italy in November. The first edition of the modern race was held in 1987, although other marathon competitions have been held in the city prior to this, including sporadic races in the 1970s and early 1980s, and the earliest known instance of a race in 1897. The competition has been broadcast live on television by Italy’s state broadcaster RAI.

The marathon race is divided into two sections: the competitive race and the non-competitive race. Prizes are available for the best performers in the competitive events for both men and women. All participants in this competition must be registered with the Italian athletics federation (Federazione Italiana di Atletica Leggera). This race attracts a number of international, professional runners each year, with Kenyans and Ethiopian athletes comprising the main competition against the national-level Italian athletes.

The non-competitive race is a fun run which is open to the public, although runners must attend a compulsory medical before taking part. The race day also includes two further competitions; the Stratorino (a 6 km fun run and walk in the city) and the junior marathon (a 1 km race for children) are available to the public and proceeds go to charity. Over 2500 runners took part in the marathon in 2010. Some 7000 people took part in the Stratorino in 2010, while the junior kilometre race attracted a field of 12,000 fun runners.

Athletes will enjoy toilets, changing rooms, a small café and massage area. Competitors may deposit the bags containing their own clothing in a designated area located near the start area before 8:45 am, and retrieve them after the race. The organization points out, however, that accepts no responsibility for any loss of valuables and / or money. 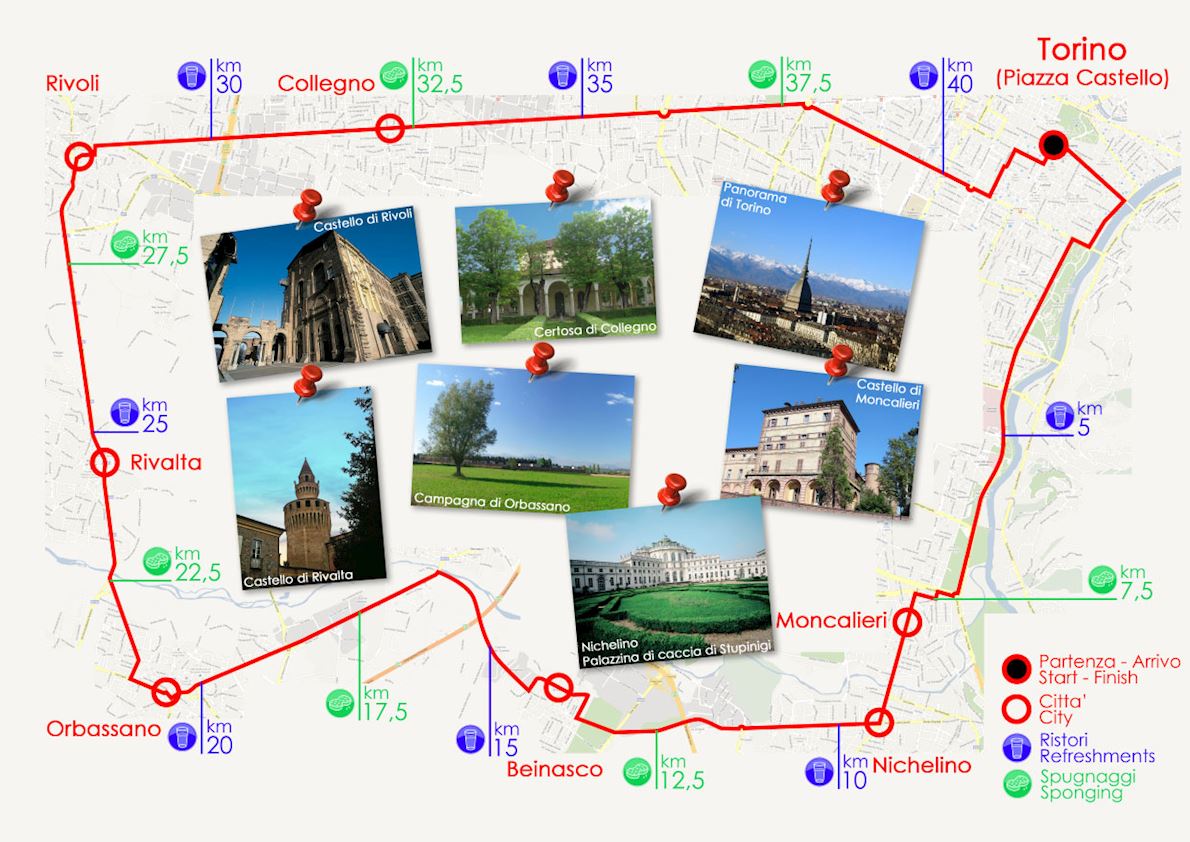 The marathon route is a complete circuit with the start and finish in the impressive main plaza Piazza Castello. This square in the heart of the city has a wonderful atmosphere and the baroque architecture is remarkable. From here runners are taken to the banks of the river Po and the towns of Moncalieri, Nichelino, Beinasco, Orbassano, Rivalta, Rivoli and Collegno, finally returning to the centre of the city via a long easy stretch, slightly in descent, just at the crucial point of the race

The course of the marathon race begins in Piazza Castello in the centre of Turin. The oval, looped circuit of 42.195 km heads out of the city and passes a number of surrounding villages in the area in the following order: Moncalieri, Nichelino, Beinasco, Orbassano, Rivalta, Rivoli and Collegno. After reaching Collegno, the course heads eastwards back towards Piazza Castello in Turin, which is the finishing point for the race.