See other Half Marathons in April

About 10th Work.ua Kyiv Half Marathon

The anniversary 10th Work.ua Kyiv Half Marathon will not be similar to any others.
On April 4-5, 2020 there will be dozens of thousands of feet running down Kyiv streets, and hundreds of thousands of eyes will witness the running history of the Ukrainian capital city being created.
For the first time in history a Ukrainian race got IAAF Silver Label, becoming one of four half marathons in the world with such a prestigious international status.
Believe us, you can not miss it!

On April 4-5 Kyiv will host the anniversary 10th Work.ua Kyiv Half Marathon, which has already become a tradition for the city and its residents. This is the only running event in Ukraine and the fourth one in the world to have the Silver Label status from World Athletics – the international association that includes 214 athletic federations from all over the world.

Kyiv half marathon will open the season of the Ukrainian Majors Running League 2020 from Run Ukraine, which includes seven running events in different cities of Ukraine. The organizers expect 16,500 participants. For each finisher of Kyiv half marathon, 1 US dollar will be donated to charity.

“The anniversary Kyiv half marathon is the event that sets the highest standards for the whole Ukrainian running market. We focus on quality, responsibility, people and emotions we give them. Getting the prestigious Silver Label status, for which we had been striving for ten years – this is the true recognition of Work.ua Kyiv Half Marathon on international scale”,– said Dmytro Chernitskyi, the General Manager of Run Ukraine. – Next year our Running League turns 5. We have completed the plan for the first five years: we have laid the foundation and set the development of the Ukrainian running market in motion. In 2019 alone, over 100 thousand people took part in various running events. It is hard to overestimate the role of Run Ukraine in this process”.

Races within the event of Kyiv Half Marathon will be taking place over the course of two days at two different locations: at the Expocenter of Ukraine (VDNG) and in the center of Kyiv. On Saturday, April 4, the youngest runners will race at VDNG, there will also be races with dogs then. The same day there will be races on the courses of 4.2 km and 10 km at Kontraktova Square. On Sunday, April 5, there will be the race on the main course of 21 km as well as relay and team races.

Kyiv Half Marathon will also include races for runners of various levels of training, from 4.2 km to 21 km, relay and team races, free “Veteran’s Ten” for ATO veterans, children’s races, Nordic Walking as well as races with dogs. For the first time participants on the mini marathon course of 4.2 km will also get medals.

The prize fund of the 10th Work.ua Kyiv Half Marathon will be significantly increased compared to last year. This year it will amount to 629 350 UAH. 8 fastest athletes, absolute champions among men and women, will get prize awards from 100 to 2000 US dollars. There will also be prizes in age groups, relays and team races.

The organizers would like to emphasize the importance of timely preparation for the race and recommend that those of you who plan to run their first half marathon already start training. There will be educational and training materials available on the website.

As always, the route of the half marathon will go through beautiful city streets, combining the historical part of the city, urban districts and the park zone of Trukhaniv island. The start and finish lines will be located at Kontraktova square. We would like to remind that this route has been certified by AIMS and hasn’t changed for years.

For the first time Kyiv international half marathon Work.ua Kyiv Half Marathon took place in 2011, and in 2015 it became a full member of the Association of International Marathons and Distance Races (AIMS). The event has also been certified by the European Athletic Association and got the highest quality mark – “5 stars”.

Work.ua Kyiv Half Marathon is the first stage of the Ukrainian Majors Running League, which includes seven running events in six cities of Ukraine: Kyiv, Dnipro, Kharkiv, Odesa, Lviv and Zaporizhzhia. Participants who successfully finish all races within the League in 2020, will get a special medal of the finisher of the Ukrainian Majors Running League.

We can offer you a package deal: accommodation and transfer.

Food stations and hydration stations are located at 5; 10; 15 km and at the finish line. They have water, medical care, food, toilets and volunteer assistance available.

Refreshments  stations are located at 5; 10; 15 km and at the finish line. 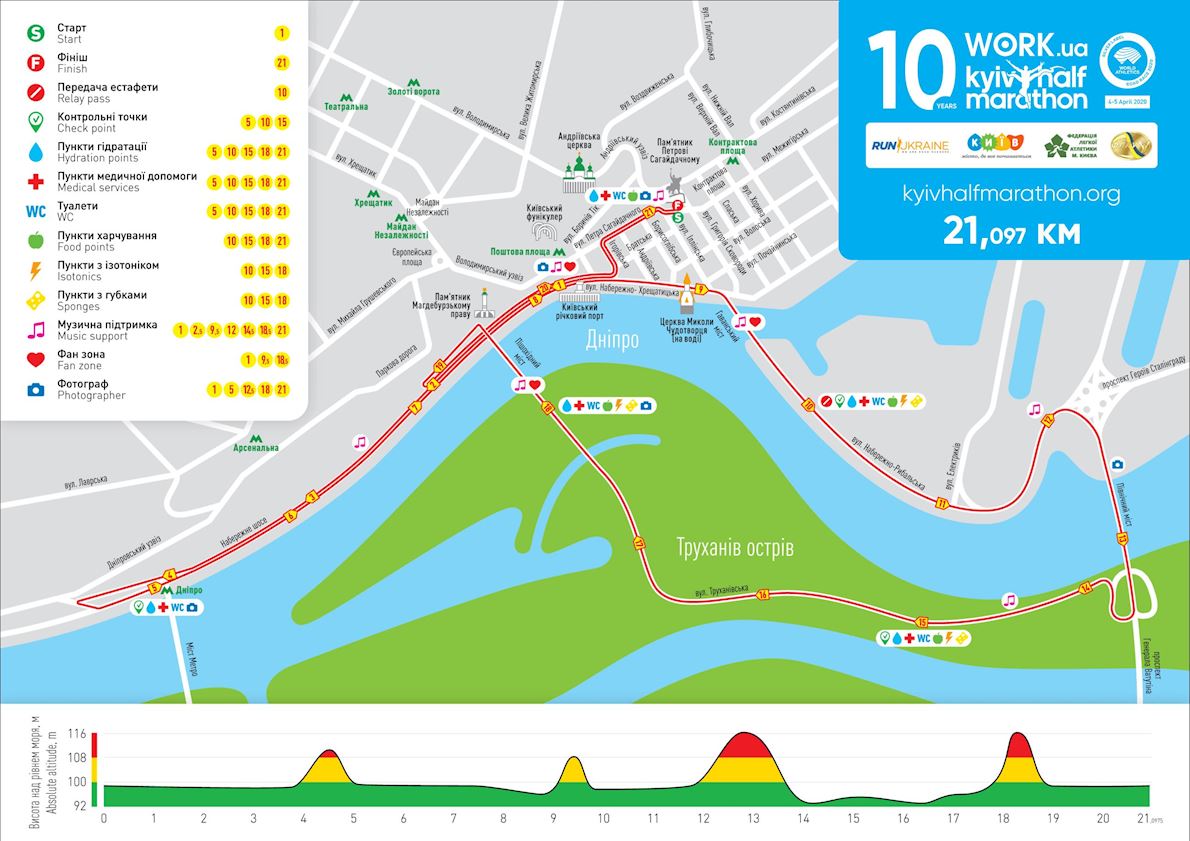 Have you experienced a spring morning on a weekend in Podil in Kyiv?

Run your half marathon through the bottom of Kyiv hills and the bank of the Dnipro river, see historical and architectural beauty of the city. Let’s discover racing Kyiv together!

21 km of race, emotions and support. Start spring morning in the old part of the city in Podil. The Kontraktova square gathers runners from all over the world.