See other Ultra Marathons in October

The Triangle Adventure is a sport event of trail running that will take place in Azores Archipelago on the islands of Pico, São Jorge and Faial with one stage in each one of them. 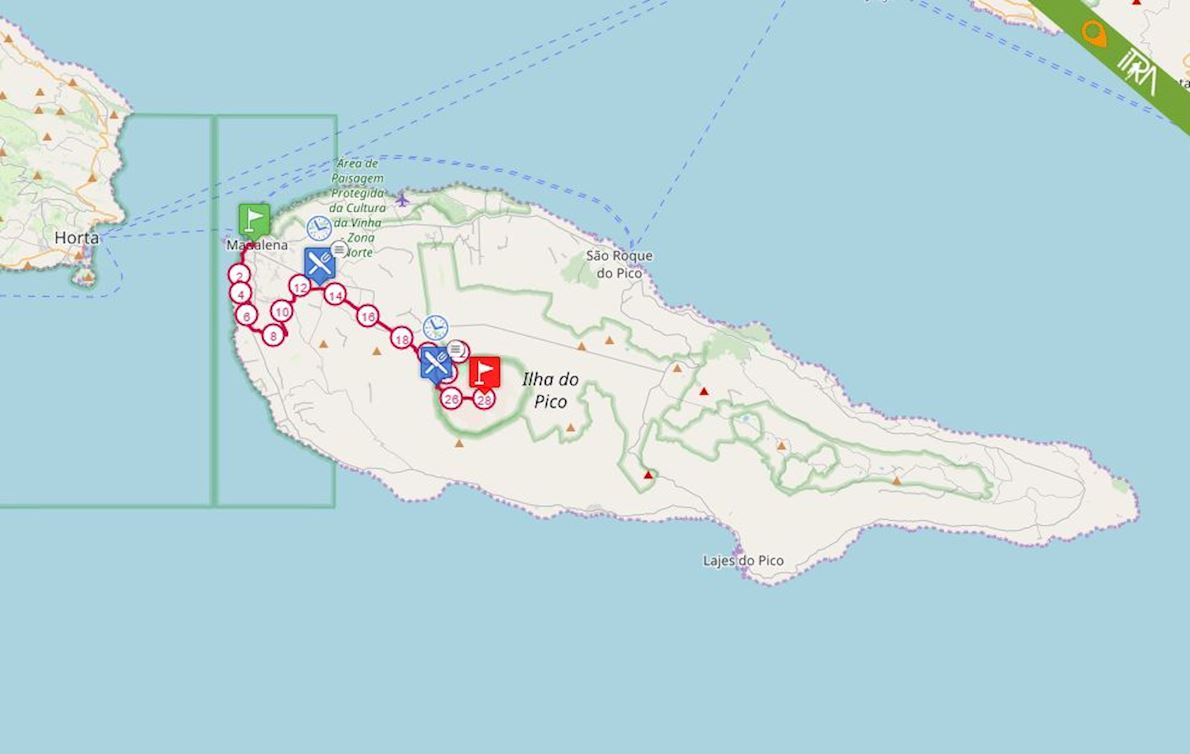 From the Vineyards to the Mountain

The trail “From the Vineyards to the Mountain” takes us on a journey of about 30 Km, from the sea level to the highest point in Portugal, Pico´s Mountain with 2351mt of elevation. The trail starts at the Madalena village harbor in direction to the “Lajido” of Criação Velha, the heart of the Pico´s Vineyard Protected Landscape, classified in 2004 by UNESCO has World Heritage. The basalt stone walls made to protect the vines from the wind and the salty water makes this a unique place on the World and creates a scenario of rare beauty, were man and nature coexist in perfect harmony. Has we pass by through the vineyards planted in the basalt fields it´s possible to watch micro-reliefs characteristic of a recent effusive volcanism, whose geologic importance classifies it has one of the geosites of Azores Geopark.

Has the altitude increases on the way to the mountain, the vineyards give place to the “maroiços”, huge piles of rocks forming magnificent sculptures. These were made with the objective to store the excess of rocks existing on the floor so it was possible to plant several different types of plants and trees.

A little bit above it starts to appear green pastures mixed with volcanic cones and lava tubes, were the cows quietly graze during the entire year and were we can contemplate the mountain getting closer and always different, sometimes with the color changing, cloudy or cloudless or even covered with snow.

By reaching the foothills of the mountain around 1 200mt high, we enter in a Nature Reserve of the Nature Park of Pico and also a geosite of Azores Geopark and a Special Conservation Zone of the 2000 Nature Network. From here the slope inclination quickly starts to increase and starts to appear a lot of typical underbrush species from the Alpine and Sub-Alpine habitats, covered by the snow for long periods of time. Reaching the top of the mountain at 2250mt high and were the first stage ends, we found the crater of Pico, an old lava field with a small peak on his inside. With good weather conditions it offers us a breathtaking landscape and it´s possible to see all the islands of the Azores Central Group.

“Fajãs” are the elements that gives the singularity and the peculiar aspect of the São Jorge Island shorelines. They are small pieces of flat land stuck between the mountains and the sea. They result from the collapse of material that accumulates on the foothills of the shore or by the cooling of lava that reaches the water.

Each one of this “Fajãs” is unique, and this trail is prepared to contemplate and to allow the contact with all of them different aspects.

The trail with about 30 Km starts at the most ancient volcanic complex of the island at the São Tomé parish. At the beginning it passes through some of the “Fajãs” of the South coast were the yam, banana and coffee is cultivated (it´s one of the few places in Europe that has production of coffee due to the existence of favorable microclimates). The trail follows to the top of the hill and descents into the “Fajãs” of the North coast like the Fajã da Caldeira de Santo Cristo, one the most popular touristic sites of the island, a privileged spot for surfing. The Fajãs of the Caldeira de Santo Cristo and Cubres are also two places internationally recognized has Ramsar Sites due to the aesthetic and landscape value and because of these two unique lagoons in the Archipelago. This second stage ends at the Fajã dos Cubres near a small chapel.

The Volcanoes Trail starts in the youngest piece of land of Portugal, the Capelinhos volcano, were you have the sensation that you are on another planet. Here it´s possible to walk on a terrain formed by ashes, tuff and volcanic bombs with 58 years old. The start line is at the sea level in the “Comprido´s” port, the most important and biggest whaling station of the Azores between 1940 and 1957, the year that the volcano started his eruption.

The trail rises up through the peninsula of Capelo and crosses 10 sleeping volcanoes entering in the “Levada”, considered the biggest work of hydraulic engineering of the 1960´s decade in Azores. After 9 Km passing through bridges and tunnels of this artificial and spectacular water channel, there´s the arrival to the Caldeira of Faial, one of the most spectacular volcanic caldera´s on the planet. After making it´s perimeter, it starts the descent through old roads to the city of Horta placed in one of the most beautiful bays in the world.