See other Marathons in marzo

Participants must be 16 years or older on race day for the marathon. There is no age minimum for participation in the LA BIG 5K.

Twenty two (22) fully-staffed aid stations will feature both Water and Gatorade Endurance Formula Lemon-Lime. At each Aid Station, electrolyte tables will be first, followed by water. Participants are advised to continue moving through the Aid Station if the first tables are too crowded to conveniently obtain fluids.There is medical support at both the Start and Finish Lines as well as along the course. Medical vans are staged at miles 6, 8, 10, 12, 14, 16, 18, 20, 22, and 24. Medical tents are located at the Finish Line and in the Post Food & Fluid Area on Ocean Ave in Santa Monica.

The Skechers Performance Los Angeles Marathon has a maximum net race day finish time of six hours and 30 minutes (6:30:59 from the time the last runner crosses the start line). The Marathon course will reopen for public use on a rolling schedule based on this time limit. Participants that fall behind this pace will be directed to the sidewalk and allowed to finish the race, but will not be guaranteed a finishing time.

Complimentary shuttles are available to participants from Union Station in Los Angeles and Santa Monica City Hall. Runners also have the option of being dropped off at the Start at Dodger Stadium. 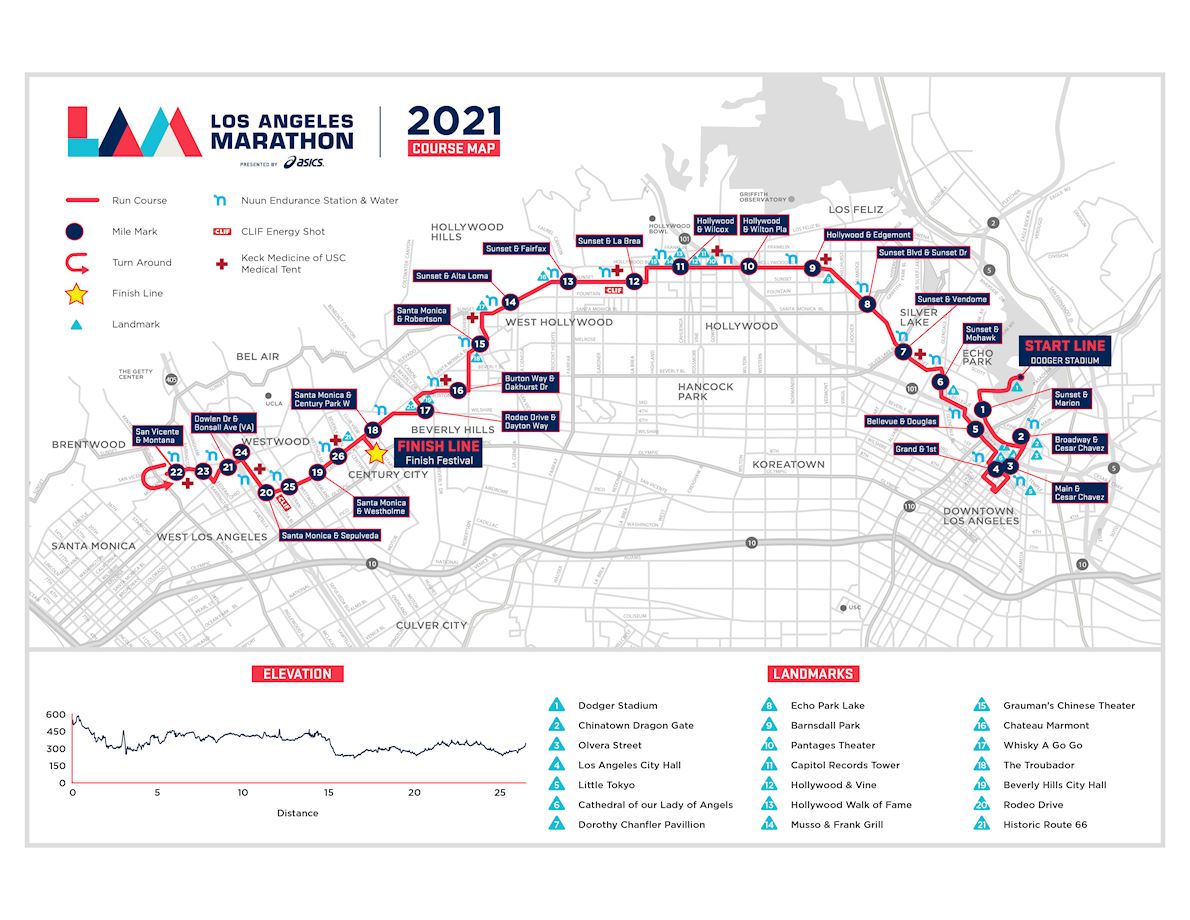 The Skechers Performance Los Angeles Marathon's Stadium to the Sea course takes runners from Dodger Stadium across Los Angeles to a scenic finish just steps from the Santa Monica Pier.The Sketchers Performance LA Marathon is known for its start-to-finish entertainment program to encourage runners and to celebrate the city’s diversity. Dozens of bands will play along the course, celebrating the triumph of each marathoner.

The new “Stadium to the Sea” course not only includes a net elevation drop of 430 feet, but it also incorporates many iconic landmarks for which Los Angeles is world renowned. After circulating around historic Dodger Stadium the course negotiates past Chinatown. The course winds through the communities of Echo Park and Silver Lake. the course also passes through notable Hollywood landmarks, then through the heart of Beverly Hills and straight down Rodeo Drive. from there The course continues west to Century City and continues along San Vicente Boulevard. The final three miles of the marathon are set in Santa Monica.