One of the most endearing marathons around the world started over half a century ago. The Berlin Marathon is not only one of the largest, but it is also one of the most famous across the globe. Participants from over 107 countries, there are tens of thousands of racers, and officiants tout more than a million spectators.Racing through Brandenburg Gate and Victory Column, the BMW Berlin Marathon is one of the Big-5 marathons that make up the World Marathon Major series.

Pulling people from around the world, it is one of the most loved races due to its flat, looping course, tepid weather and enthusiastic onlookers. Over seven world records have been broken along this infamous loop, which is what makes it that much more excitement-filled.More than just a marathon, the whole city comes alive with more than 70 bands and a festival that pulls from the neighboring countries just for a glimpse of the action. The highlight of the festival is when runners make their way around Brandenburg Gate directly past the grandstand on their last 400 meters as the crowd cheers them on.Although an excellent course for beginner through advanced, the BMW Berlin Marathon’s flat nature makes it ideal for those looking to get their feet wet. An excellent way to see the city, even seasoned marathoners will be awed by the spectacular nature of this grand historical race. See Reichstag, BerlinerDom, Brandenburg and Potsdamer Platz in the most dramatic way possible, all from a runner’s perspective.

Toilet cabins will be provided in sufficient number at the end of every refreshment station, as well as in the start and finish area.

All participants will receive a medal at the finish line (until the finish is closed).

Time measurement is done exclusively with the ChampionChip! The ChampionChip is a small plastic transponder that has to be fastened on your running shoe (no metal contact!) and will measure your personal race time. 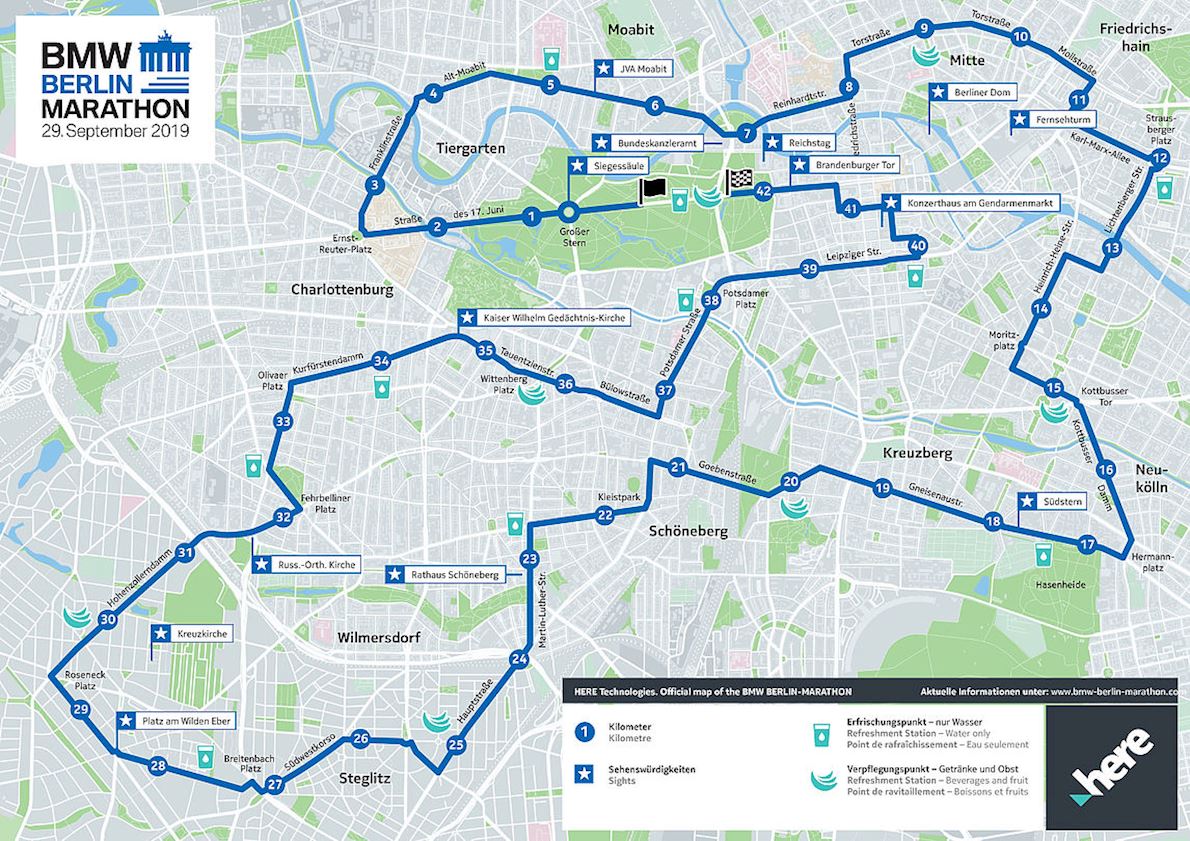 As a runner you will pass by some of Berlins' most popular sights: Siegessaule, Bundeskanzleramt, Reichtag, Fernsehturm, Rathaus Schoneberg, Rheinbabenallee, Tauentzienstr, Philharmonie, Konzerthaus, Staatsoper, Berliner Dom and Brandenburger Tor.

After leaving Brandenburg Gate, the course passes Charlottenburg, around Tiergarten, along Moabit and Mitte, and then south to Friedrichshain. After that, it winds west between Kreuzberg and Neukölln, through Schöneberg, over to Steglitz and Zehlendorf, before turning north back toward the city's center. Looping above Schöneberg, the course comes full circle as it finishes through the Gate.