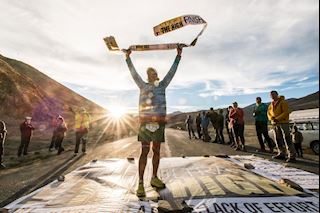 In 72 hours and 333 Km in length, La Ultra – The High takes runners to the high mountain passes of Ladakh a massive cold desert, part of The Great Himalayan mountain range in India. The race is as brutal as it is beautiful. It can make you experience 40 degree C heat and take you to Minus 12 C cold in matter of 6 hours. Oxygen levels are 50 % of what you breath at sea level. This race is an adventure, for most, an adventure of a lifetime. The only way to know this is to come and experience it yourself. The race, the atmosphere, the energy and the mighty Himalayas will blow you away. We caught up with the race organizers of this amazing race!

How come you started the race?

It was in 2009 when Dr. Rajat Chauhan, the race Director & founder of La Ultra - The High was in Manali, running up the 3800 meter high Rohtang Pass. The mesmerizing beauty of the Himalayas, the challenge these mountains present and how they humble you were few reasons that started him to think about running in the Himalayas. La Ultra - The High however was to take shape much further from Manali.

An altitude map of the highway to Leh made him dig a bit further on what could be the route for the race. This took us to LADAKH, the land of high passes. 'La' in Ladakh stands for ' a high mountain pass'. These passes are sacred to the locals, that's where 'La' in La Ultra comes from. THE HIGH, because it is literally a breathtaking high altitude cold desert where most high passes extend beyond 17,000 feet in height.

Running here means thorough acclimatization and most experts in high altitude advised against the idea. This really was the kick he needed to make it happen. There have been over 7 documentaries on the race in 8 years since inception, the 1st documentary, THE HIGH: Making The Toughest Race on Earth showcases the story of the birth of La Ultra. It's now available on Youtube for everyone to see.

There are few non-stop ultra marathons out there that throw such a challenge as La Ultra does. You begin to think of them and 'Oxygen starved environment' comes first. In the race, oxygen levels dip to 50 % of what you breath at sea level but there are other factors as well. Extreme temperature variations. It can fluctuate from Minus 10 C to 39-40 degree C hot in a matter of 6-7 hours.

At 11,000 feet and above, radiation is 60 % more than in plains. You risk getting a frost bite & a sunburn on the same day. Over all of this, there's a strict time limit all the runners need to follow, and at regular intervals they need to make it to stations or risk disqualification. All these come together to make this race a unique challenge, unlike any in the world. We have earned the title of "World's cruelest Ultra-marathon", given by those who have experienced it. Due to these factors, and a compulsory acclimatization time needed before the race, only a handful from around the world sign up for this challenge every year. In 8 years, we have hosted 123 athletes from over 23 countries.

To stand at the start line is special, to cross the finish line at La Ultra is an experience of a lifetime. This is what makes this race and those running it, very special.

Ladakh is one of a kind high altitude cold desert in the Himalayas that has a rich and ancient culture. It is part of the ancient silk route with connections to central Asia & Tibet. The race starts from base of the Karamkoram mountains in Nubra Valley at 10,500 feet. The route moves towards Khardung La, which is said to be the highest motor-able road in the world at 17,700 ft.

You then cross the main town of Leh, which is the capital of Ladakh. There are numerous ancient monasteries along the race route. Some over a 1000 years old. The flagship event, 333 Km ultra culminates in Moray Plains (Debring) after crossing Tanglang La, the 2nd highest motor-able road in the world. Moray Plains is the extension of the main Tibetan plateau on the Indian side. The plateau is above 15,000 feet with numerous large salt water lakes. One can visit the 'Pangong Tso', Tso-Moriri and Tso-kar.

There a number of trails around the town of Leh and all over Ladakh one can explore. Even trekkable peaks in the region extend above 6,000 meters (19,500-21,000 ft) making Ladakh a paradise for explorers & mountain lovers. All these activities before the race also helps you acclimatize for the race. The lakes mentioned above are accessible by road and have numerous luxury camp sites to stay and relax.

We have been fortunate to host not only the best of athletes from around the world, but also great human beings. For us all those who have stood at the start line of La Ultra - The High are winners.