See other Medias Maratones in octubre

On Sunday from 8 o'clock you can hand over your bag or clothes bag in the castle courtyards on the parking deck. There is no liability for valuables in the bags / bags. 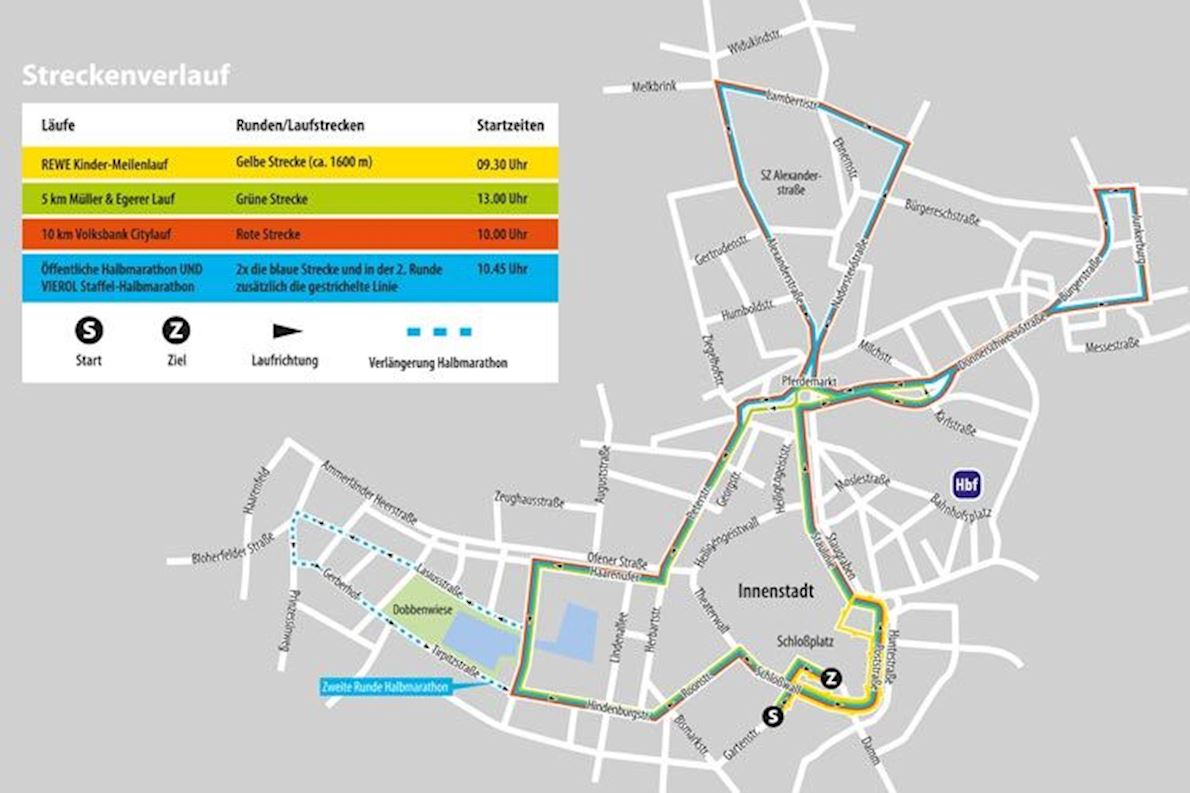 The marathon will be in Wardenburg. Also this year, two thirds of the route are designed as a landscape run; a third is completed again on the 10 kilometer route. We are based on the half-marathon route of the Wardenburg summer run, The start is near the indoor swimming pool Wardenburg. For the first few kilometers you are in the center of Wardenburg. On Litteler Str. You leave Wardenburg in the direction of Littel. At kilometer 3 you turn off towards Achterholt; past the watermill worth seeing. On paved or gravel paths past the villages Achternholt and Oberlethe it goes back to Wardenburg. Shortly before the Huntedeich you still leave the Tillysee behind you. On and along the dike, it goes south to the canoeist Astrup. The route continues on the Sandkruger road to Höven. Here you have reached the southernmost point of the marathon route. At about km 17, the first slope of the route awaits you; Here the highway 29 is crossed.

After this short, crisp climb continues via Astrup back to Wardenburg. Very close to the start, you will have run your first 21 kilometers, immediately to collect on the or next to the Huntedeich your further kilometers. In northern direction you pass the village Tungeln. The Hunte as a faithful companion, you now come closer and closer to the city of Oldenburg kilometer after kilometer. At the Niedersachsendamm you say goodbye to the Hunte, past the Marschwegstadion and the Olantis Huntebad you dive into the city center of Oldenburg. Here is the mood in Oldenburg. Along the Paradewall now break your last 9 kilometers. With the support of the many spectators along the route, especially in the central area of the horse market, you will be carried on a wave of euphoria to be really celebrated at the finish. YOU ARE A WINNER!

It leads you on a fast route through the heart of the city of Oldenburg. You start at the Pulverturm and run on the Wallring at other attractions such as the castle, the Horst Janssen Museum and the State Theater over.

The horse market, otherwise transport hub in Oldenburg, is also a hub for our runners of all routes. The half-marathon runners pass him several times, after you have gone through the otherwise heavily frequented by traffic arterial roads Donnerschweer road, Nadorster road and Alexanderstraße.

Then it goes for you through the Peter Street and the Dobbenviertel. As in 2018, the additional kilometer around the Dobbenwiese will already be covered in the first round . At the end you run back to the Wallring via the Roonstrasse at the Staatstheater. Because it was so nice, the lap is run a second time (on the normal 10-kilometer track). At the end of the second round you can already celebrate on the Schlossplatzstrasse until the finish on Schlossplatz for a great performance!