The Great Races Of Belgium…Haven’t Considered Them? Well Get On It! 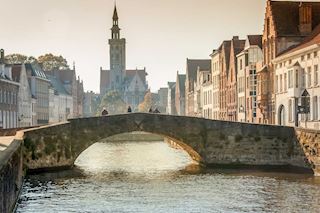 Belgium is a hidden gem in Europe that might not be on every runner's radar, but it should be. Belgium is known for its dark, brooding exterior, medieval ambiance, and architecture that is unique and somewhat chaotic. Home to NATO and the European Union headquarters, it is a sight unlike any other in the European countryside and definitely somewhere that a running enthusiast should investigate. Some of the most fun and most outlandish runs on, around, and from end to end, happen in Belgium. So, mark your calendar, strap on your shoes, and give one of these great race events your all.

Unlike other night runs, there aren’t any candles burning brightly at the Antwerp Energizer night run. As the night creeps in, the race is set in motion without any light to guide the way. Fairly new to the race circuit, the Antwerp Night run is a 9-kilometer parade of runners with a party-like feel. Not just about the race, there are fun sights to behold, and the streets come alive when they should be sleepy, with spectators to cheer in weary participants. Taking place in September, be prepared, the air can get a little chilly at night.

Run as a Christmas time favorite, in the name of old St. Nick, the runners of the Santa Ana run a 5k throughout the downtown center of Antwerp, is completed with participants all dressed up in their Santa costumes. It isn’t just about the race to the finish line; it is about finding some Christmas cheer, enjoying the city filled with Christmas Trees and lights, and honoring Santa’s plight to deliver gifts by runners making it to the end with beard intact. Of course, the Santa Run takes place in cold December, but the Santa costume should help keep you warm.

This 10-kilometer feat is one of a kind. Not a road or an extreme race, the Battle with Nature Race Series is about finding the inner survivalist and making it across the finish line conquering whatever life and the outdoors can throw at the participants who commit to taking the challenge. The high-intensity obstacle course is not for the faint of heart, and those who are onboard should be prepared to get wet, muddy, and to encounter cold temperatures. The race is just at the start of fall, but you never know what to expect or what mother nature will have planned.

If you are looking for a race that allows you to get a glimpse of the cities of Antwerp and Bruges all on foot, these urban races are an amazing series. Race through the downtown of both cities taking in the beautiful scenery of the rich historical architecture. After you finish your breakfast, off you go on a ten-kilometer race to see all that the cities have to offer. The urban races are run in the spring, summer, and as the colder weather of fall races in. So, pick your date, your city, and get those feet pounding the pavement.

For the seasoned athlete who is looking for some grueling conditions, the Brussels Marathon might sound relatively harmless, but it is anything but. Racing through the city first on a fast road race, the participants then go off-roading onto some seriously hilly and rough terrain. If you haven’t gotten to see the downtown, or been to the marathon to watch it come alive with spectators cheering on race participants, then the Brussels Marathon is one that you will want to cross off of your race bucket list. Held in October, the weather can sometimes be a bit chilly, so plan for all weather conditions.