Running was my new drug...one that was good for me, physically, mentally and spiritually 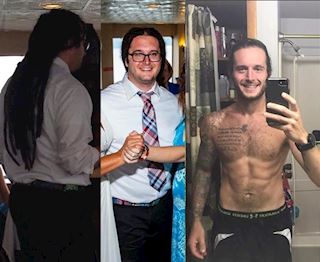 I wish that I could tell you that my running story was all rainbows and lollipops. But it's not. I will give you a spoiler alert and say it does have a happy ending. Picture this: a 5' 9'', 220 pound white privileged kid from the suburbs from upstate New York, with glasses and dreadlocks that were down to my ass. Not only physically, but also mentally, I was not headstrong or in a good place. I was hopping from job to job, hospital to hospital, visiting almost every inpatient place you could possibly find in the Northeast. I would use drugs and alcohol as my coping mechanism. Clearly not the best choices. It wasn't until after a few weeks of thinking about it that I decided to make a complete 180. I went to work one day, took a break, cut my dreadlocks off and went back. I was a craniosacral therapist for an osteopath doctor at the time.

I decided not only to change my hair but my physique as well. It started with 3 to 6 days a week at the gym, with no real routine, mainly weightlifting and some cardio at the end. I would play this game on the treadmill where I would put a towel over the headboard and just basically run as far and as fast as I could for as long as I could. About two months went by doing this and Spring finally arrived. So I wanted to take my cardio or running to the streets. I wanted to get out of the gym on the weekends and not do the typical bar scene, undoing everything I tried to do that week, by drinking what I just worked so hard to take off. So the game continued on, trying every Saturday or Sunday to just go a little further than I did the week before. Going the longest distance on a treadmill… I would do about 5, 6 , 7 , 8 miles, until one weekend I finally hit double digits.

Now, the osteopath doctor that I was working for was a multiple Boston runner, with a personal best of 2 hours and 49 minutes! He told me " One time that I trained for a marathon, 15 miles was my longest run and I still did it in 3 hours and 10 minutes". That still sticks with me to this day. In my head I thought no way could I ever possibly run a marathon, so I tried to run a half on my own and I did it. Wasn't an official course, just 13.1 miles to see if I could do it. I came in the next day feeling like Superman. Even though it took me over two hours.

Like my extremist self, I thought "Hey, I'm going to do it, I'm going to do it!", so I just signed up for a marathon, not even with a month or two of running under my belt. A trial by fire, my first race was a marathon and almost 90° with 80% humidity… holy crap! That late May I did a marathon in a gruesome 5 hours and 6 minutes. Still not bad from couch to marathon. I thought this was my new drug and it was good for me, mentally, physically, spiritually. I kept at it. Started to become a little bit more competitive with it. Bought some decent shoes. A fancy GPS watch. And I started bringing fuel with me on my long runs. That October I did a 3:41. Again not too bad for the first year of running and just in general. The fire burned and fueled even more with running and trying to find new programs, better ways to eat, longer runs, doing speed work. I realized quickly that this is a way of life and, like anything, there's no fast track - if you want to achieve anything, it takes time, due diligence and a lot of practice.

Back then, I was still running with music and trying to distract my body from just trying to beat up every grueling running session or cross training session. I got a little burnt out for a month there, but soon I had regained my focus and remembered how far I came in such a little time. So I turned off the music, turned off the auto lap on my GPS watch. Took most of my runs on the bike path or in the trails. Running is the only way that I can be in my head when it's not a scary place to be in the present. I used to dread and hate long runs... now I find myself striving for them. Not only has running made me a stronger person physically, but also spiritually and mentally. I am more confident than ever on this being the right path and who I truly am. It's not just a fad, it's not just a new found hobby... it's a true way of life for me.

I'm still training hard and diligently, chasing a sub 3-hour marathon, with my long-term goals to be a sub 2-hour and 30 minutes marathonist. I try to inspire others not only with mental illness but anyone who is starting a fitness journey… and I try to remind them that every journey begins with the first step. We truly can accomplish anything we put our mind, body and spirit into.

So if you've gotten this far reading my story, thank you very much! I hope you enjoyed my little tale and adventures. Try to remember that the next time you are battling anxiety, depression or just about any trouble or strife in life, instead of running away from it, run towards it. Stronger than ever!

Do you also have a running story to share? Send us an email to [email protected]