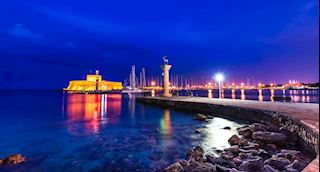 Could there be anything better than running a marathon in the country where both the Olympic Games and the marathon saw the light of the day. And in addition, be seduced by the beautiful Mediterranean sea and be able to sense the tide of history all along the same course. The race which meets all these requirements is “Roads to Rhodes” and takes place on the northern tip of the popular Greek island.

Rhodes brings to mind sunshine-filled days, blue seas, medieval castles and ancient wonders. Beyond the idyllic beach scene, Rhodes hosts a major Marathon event, aiming at challenging the athletes’ stamina. If you have been to Rhodes once, you always want to return. And this time with running shoes in your luggage.

Roads to Rhodes Marathon will be held on April 29th 2018, when spring has come to Rhodes and the Mediterranean, but it has not yet become too hot for a marathon run.

The Rhodes Marathon has the official approval of AIMS and IAAF to ensure the validity and the international recognition of the race. This year along with the Marathon, a half Marathon, a 10K, 5K, Kids 1000 meter run will be arranged, providing more selections for the runners.

The first Roads to Rhodes was held in October 2014 and was initiated by American-Greek George Zaras. Roads to Rhodes attracts an average of 4 700 runners each year. More than 40 percent are women and many travel to the island particularly for the event.

The organizing team of the event explains “For the marathon and the half marathon 35% of the participants are marathon tourists. This is a great number for our race. For this year's event on 29/4, we are expecting even more people because of the many direct flights to the island from all over the world.”

Roads to Rhodes have a carefully thought-out course that allows runners to follow the ocean from the start to the turning point and back to the finishing line. It is a circular route, entirely car free, starting and finishing at the city center. In addition to providing breathtaking views of the deep blue Aegean Sea, the races give you plentily of historical and cultural inspiration.

The ancient city of Rhodes is a vibrant UNESCO World Heritage site. There you can also admire the old harbor, Mandraki with its two stags, guarding the harbor entrance. This was the site of the legendary Colossus of Rhodes, one of the Seven Wonders of the Ancient World. The Mandraki Harbor with all the small vessels and big ships is full of activity also in present time and visited by people from all corners of the world.

The finish is - just like the start - at Eleftheias Square in the heart of Rhodes, famous for its imposing buildings. The Town Hall, the prefecture, the post Office, all of the them are great samples of the early 20th century architecture, built by the Italians who occupied the island until 1947

A large pasta party reinforces the experience of Roads to Rhodes and provides energy to continue discovering the island. The organizing committee, tells us a bit more about the pre-race festivities. “The Pasta party is always a great opportunity for all runners to socialize and enjoy delicious pasta dishes, salads and desserts. It takes place, the evening before the race somewhere nice, either outdoors or indoors. There is nice music and a great atmosphere! All the athletes and the organizers have the chance to meet each other, relax and get the energy they need for the next big day! Also journalists and photographers are welcome to the event!”

Among Rhodes's all sights, we would recommend you not miss visiting "The Palace of the Grand Master", the Rhodes old town, the harbor with its aquarium and further south, along the east coast, the beautiful village of Lindos with its acropolis and much more.

More information on how to join Roads to Rhodos