Qualify for the Boston Marathon 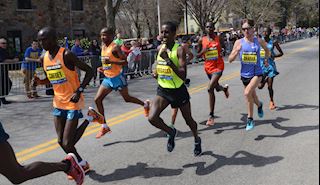 What Are The Rules for joining the Boston Marathon - The World’s Most Favorite race?

Not everyone can compete in the Boston Marathon. That may be one of the biggest allures that elite marathoners like about it. You have to qualify in other qualifying races to make it to the starting line and you have to be fast,  very fast. The race is not only world famous for being though to enter, but also for being one of the most fun marathons to join - on the race trail, before and after.

If it is your goal to run in the Boston Marathon, there are specific rules that you need to follow and goals that you need to meet. Having a qualifying time is not the only rule that you have to complete to run through Copley Square.

Be the fastest of the fast

To qualify for 2017, you have to have met your qualifying time in another race by September 19th of 2015. Those qualifying times need to be made at only those marathons that are officially accepted and can not be on any other type of race or course besides a true marathon. They have to be AIMS or USATF certified courses. Indoor marathons also do not count for qualifying times. To qualify, you must be a minimum of 18 years of age by the date you wish to participate. The qualifying times are broken down into age and gender. Once you have submitted a registration form, your times have to be verified before you are formally considered.

The qualifying times are as follows

One of the strictest marathons in the world, the race remains an icon in the world of running. To say that you have competed in the Boston marathon says a lot about the type of athlete you are, and the elite category that it puts you in.

Endurance is a key

If your goal is to get to the Boston Marathon then you have to be mindful about the races you run and the time you allot yourself. It may take a year or more to qualify, and as runner’s know, training doesn’t last very long. Staying in top shape for years to run a marathon is not something that every athlete is prepared for.

If you do make it to the Boston Marathon, it truly is a unique experience. The city comes alive with excitement and the enthusiasm of the spectators can be as much fun as crossing the finish line. Just make sure to get your paperwork in quickly and find those races that will qualify you.

A great goal to shoot for, it is like nothing else you will ever do as a runner.