Not weak on hell week! 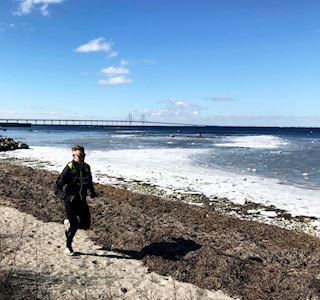 Among the toughest training weeks, I have ever completed. The 20k distance run on Sunday put a nice cherry on top of last week’s sessions. Started off with a strength session and a cosy 60 mins cross-trainer. Sparring with nothing other than Netflix on a relaxed Monday afternoon.

Then things got weird..

Travesty Tuesday added up to 25k including 6k threshold interval averaging 3:way-to-low which is way too fast. In hindsight, the aim of that session should have been to get home.. However, amazing sparring with great runners - passed out with a smile.

The trainer went around giving instructions and pace directives to the other runners. When he arrived at me he just sighed and said: ‘and you...you do as you like’. Took it as a compliment.

Wishful Wednesday flew by completing a few kilometres with a friend - good times remembering that running I quite pleasant.

Thrashing Thursday went out of hand. Planned on some distance plus a light pace increase with some of the more reasonable runners.

Arrived the starting point having quite a few kilometres behind me already. Joined the pack of eight or so fast runners and enjoyed the ride - excellent feel despite high pace for about 30mins, which I was painfully reminded of on my homewards weaving strides, eventually pulling myself up the stairs to my apartment.

TRX Friday. A concept I have forced upon some of my unlucky chosen. Core and strength training to be able to sustain a high training volume. Fridays are usually sacred, not to be used for running. However, hell week is not like any other week. 10k treadmill warmup.

Slow Saturday morning opting out running with the rest of the group. I wanted to sleep and watch cross country skiing in the morning. Had to complete 30k on my own any way possible. A challenge I tell you. Especially if your phone dies after 10 mins leaving you to your thoughts in a concrete wasteland for about two hours. Probably could have solved some of the great mysteries during that time.

Sunday started reluctantly having tried out a great 25yr old water the night before. Meeting with a running club in the morning - good stuff. Starting up this spring. Managed to lure a friend out for my last 20k of the week.