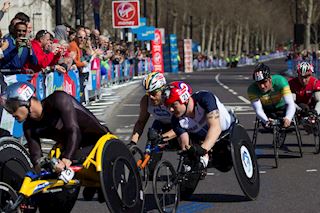 Wheelchair Marathon Enthusiasts have many races to explore

You’ve never been limited by anything before. A marathon is a huge accomplishment and if you have made it your goal, the good news is that there are many marathons with a wheelchair division. There are hundreds of marathons across the American countryside as well as around the world. If you are ready to take the ride of your life, begin training for these spectacular events that will test your endurance and your resolve.  Almost every major marathon run around the world will have a classification for wheelchair racing. So, from the mountains of North Carolina to the jungles of Hawaii, you have just as many options as any marathon enthusiast. To see the most incredible hidden gems around the world, travel to the ends of the earth and experience things you never dreamed of all from the open road.

One of the oldest marathons in the world, the Boston Marathon has been running for 120 years. Not only one of the most enthusiastic crowds, but the city also shuts down for the race weekend while everyone celebrates the event. Make your way around one of the oldest cities in the US. A qualifying race, you will be competing against the most elite athletes in the world. Go from the rural outlays to the downtown city center, you’ll end at Heartbreak Hill, which is where hundreds of people will be there to cheer you on. Good old American spirit, there is a reason it has lasted for centuries.

The Big Sur Marathon is in the heart of California. Going from Highway one to Big Sur, and then all the way to Carmel you will get to see all the fantastic views of the Pacific Ocean. One of the largest and most spectacular urban marathons in the world you go from surf to Redwood, seeing everything that California is known for. The biggest challenge is the hilly terrain, so be prepared to have some obstacles in your way.

Held in October, this may be a flat city, but there is no lack of ups and downs in this race. The Dublin Marathon runs through the historic city of Dublin. Some of the most beautiful architectural feats ever created and old world charm to behold, this is one of the most beloved marathons around the globe. It isn’t just the race that you are going for, it is the excitement, encouragement, and fun of the crowd. Everyone around Ireland comes out to cheer on the runners and afterward to celebrate along with them too.

The Big Five Marathon is held in June in South Africa. Some of the most exotic and spectacular sites on earth, you will cover land along with creatures that you can’t even see in most zoos. The course runs through the Limpopo province’s Entabeni Safari Conservancy, giving you the once in a lifetime chance to see big game in their natural habitat. Not only is the vast countryside amazing to take in, but it is also a communing with nature that you can’t get anywhere else on earth. One not to miss, there is a reason people flock from around the world to this outstanding event.

One of the most beloved marathons worldwide, the Missoula Marathon is also one of the most scenic. A hometown feel, it is an international event in the middle of a small town setting. The entire community gets involved to cheer runners on as they make their way up and down high mountains and beautiful, awe-inspiring sites. If you are looking to get your wheels wet, this marathon will qualify you if you want to proceed to the Boston Marathon.

Known as the flattest and the fastest marathon in the world, the London Marathon starts from one end of the city at Blackheath and continues through to Buckingham Palace. See downtown London architecture in a unique way. The course has changed several times since the start of the marathon in 1981, but it is the changes that make it the most exciting. Never knowing what new part you are going to cover, the point is to see historic places and iconic buildings throughout the downtown center. Overtaking the city, the marathon draws people from around the globe. See London the way it was meant to be seen, all from a marathoner’s perspective.

If you are in a cold weather climate, ditch it in December to try your hand at the Honolulu Marathon. A paradise on earth, this Hawaii marathon attracts people from around the globe with reason. It is the third largest marathon in the United States, yet you feel like you have left the real world for something well beyond. From coastline to coastline you will see the most spectacular beach views oceanside. The best part is the follow-up celebration that ends with the Luau and a huge concert that attracts and brings the entire city alive.

This international marathon is a smaller event, but that is what makes it so fantastic. Move through the old streets of Berlin, seeing historic sites and architecture that are absolutely fabulous. Seeing a little of the old mixed with the new modernization brought to a nation when the Berlin wall came down, the marathon is an event that inspires freedom for those who once were not free. Mostly flat land, it is a fast race without too many hurdles and obstacles in the way.

Spanning the countryside, the Mont Saint-Michel Bay Marathon is one of the most scenic races on earth. Held in France, the run goes along the Atlantic coast. Peruse through old world towns that appear to be frozen in time. A little bit of everything, you can see one of the most awe-struck terrains in the world all from the unique perspective of a marathoner’s eye.