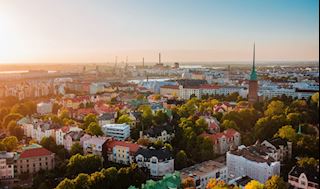 For those who wants to run a fast half marathon in 2017, close to the sea in the middle of a big city, combining history, culture and a sport heritage, the choice is quite simple. The Helsinki Half Marathon meets all requirements on June 10th and will in addition give you an opportunity to participate in the country’s 100 year anniversary in the capital Helsinki.

Finland’s heritage as a sport nation

2017 is a year of celebrations in Finland, which became an independent nation on December 6, 1917, after being part of Sweden and then Russia. Finland’s fascinating history is highlighted in many different events in Helsinki this year, which makes it worth staying a few days extra before or after the race itself.

Finland is a great sport nation, especially within athletics, in which running always has had a prominent part. Finland's greatest athlete throughout all times is Paavo Nurmi who won no less than nine gold medals and three silver during three Olympic games in 1920 to 1928. He was the one who lit the Olympic fire at Helsinki's beautiful Olympic stadium when Finland hosted the summer Olympics in 1952. The games were originally planned for the summer of 1940 but the Second World War came in between.

The Olympic games was a great success and the Olympic Stadium with its 72-meter-high characteristic tower is now a main spot to visit in the city. The Stadium has been the site of two World Championships in athletics - 1983 and 2005.

Helsinki Half Marathon route lets you explore the capital

Helsinki Half Marathon Route is fast and has no major differences in altitude. The starting point of the half marathon is situated in the northern part of central Helsinki, near Finlandia Hall and the Helsinki Music Center. The course then turns south, and you can soon spot the Baltic Sea in the harbor. Then course turns east and you will run along the sea in the park environment.

You will then turn north through Kaivopuisto Park, past the gorgeously located residential district and even further east. In the Katajanokka district you will spot many historically interesting sights and beautiful residential buildings.

The course then extends northwards and follows the South Harbor coastline and past the Olympic Quay, which was built for the 1952 Olympics. The race continues north along the Baltic Sea. Closer to the finish you will pass by the city lake Töölönlahti and soon accelerate towards the goal at Finlandia Hall.

After passing the finish line of Helsinki Half Marathon, the runners has ran through and around all of Helsinki, one of northern Europe's largest and most fascinating cities.