The Semi-Marathon de Paris is an unmissable race. Two months after your New Year’s resolutions, this season-opener is your chance to really get back in the swing of things. There’s no way to cheat in the Semi-Marathon de Paris: you’re going to have to push yourself to the limit! Speed, timing, motivation, performance: this race will set the pace for all your athletic challenges in the year to come. Be there or be square!

The route is relatively flat and takes the runners around the east of Paris, along the avenues of the “Bois de Vincennes Wood” and the streets of the 12th arrondissement. The route finishes in the city center.

With almost 40 000 participants the event attracts runners from the Ile de France region, the rest of France as well as all over the world.The run is a festival-like experience with musical events along the route, not to forget the spectators!

A handful of elite runners from Kenya and Ethiopia will also be there to try and break their records. Wherever you’re from, nothing’s stopping you from trying to outrun them. Harmonie Mutuelle Semi de Paris  is run on relatively flat terrain, which means that anyone can take part. Here’s looking at you!

Get your trainers on! 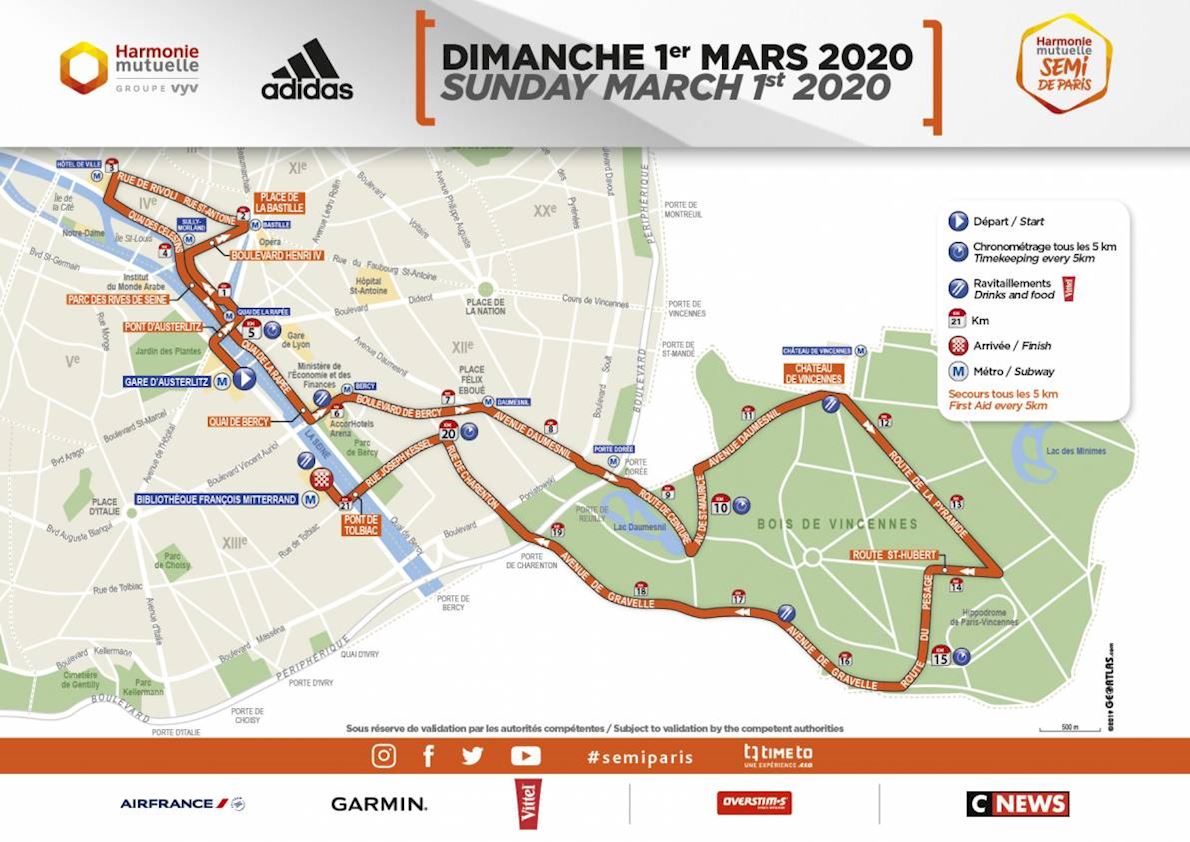 If you live in Paris, then the Fitbit Semi de Paris is your chance to take back your city and show everyone what you’re made of once you get into your stride! Historically, you’ll be taking the east side. The race will start on the Esplanade du Château de Vincennes (no less!), but you’ll soon hit good old tarmac in the streets of the 12th arrondissement. Represent your neighbourhood! Are you really going to let yourself be overtaken by Little Miss Place de Clichy or that guy from Montparnasse? Place de la Nation, Place de la Bastille: so long as your legs don’t fail you, you will cross the capital’s most iconic squares before reaching Châtelet. No time to stop at Les Halles for a panini – it will already be time to head back to Parc Floral to receive your finisher’s medal. If you’re from elsewhere, challenge the Parisians and show them that you have bags of energy. You won’t be alone: over 4,000 foreigners intend to defend their countries’ honour whilst enjoying the party atmosphere guaranteed by musical entertainment along the entire route.

The route is relatively flat and takes the runners around the east of Paris, along the avenues of the "BoisdeVincennesWood" and the streets of the 12th arrondissement. The route finishes in the city centeron the Esplanade of the Château de Vincennes.