We are excited to bring you the annual Green Stride Newburyport Half Marathon & Relay in late October! We experienced tremendous growth in the last two years and look forward to continuing a great tradition this year. Has been voted “Best Half Marathon” in the North Shore as well as the “Best Post-Race Party” by the North Shore Road Race Guide, we plan on keeping our fun, scenic and challenging environment. The post-race party has good food, great beer and some rockin’ bands that will help carry on the tradition of our award-winning post-race parties (pretty cool – we know). The historic, scenic course and ideal October running conditions in New England are sure to bring a wonderful atmosphere to Newburyport in October.

We will have a bag check available to all runners. You can pick up your belongings after the race. Just be sure to leave enough time to drop everything off!

The start of the race is approximately at 202 Merrimac St on the corner of Kent St. Almost all of the streets off of Merrimac St are parking friendly. Please be courteous and respectful to the neighbors living in these neighborhoods and be sure to not block a driveway or park too close to a fire hydrant. Carpool if you can – we’re expecting a big crowd! Keep in mind that if you arrive less than an 1.5 hours from the start, it is best to not drive too close to the start line as you may be in traffic.

The course will be stocked with water stops, and we will have Energy Gels too. 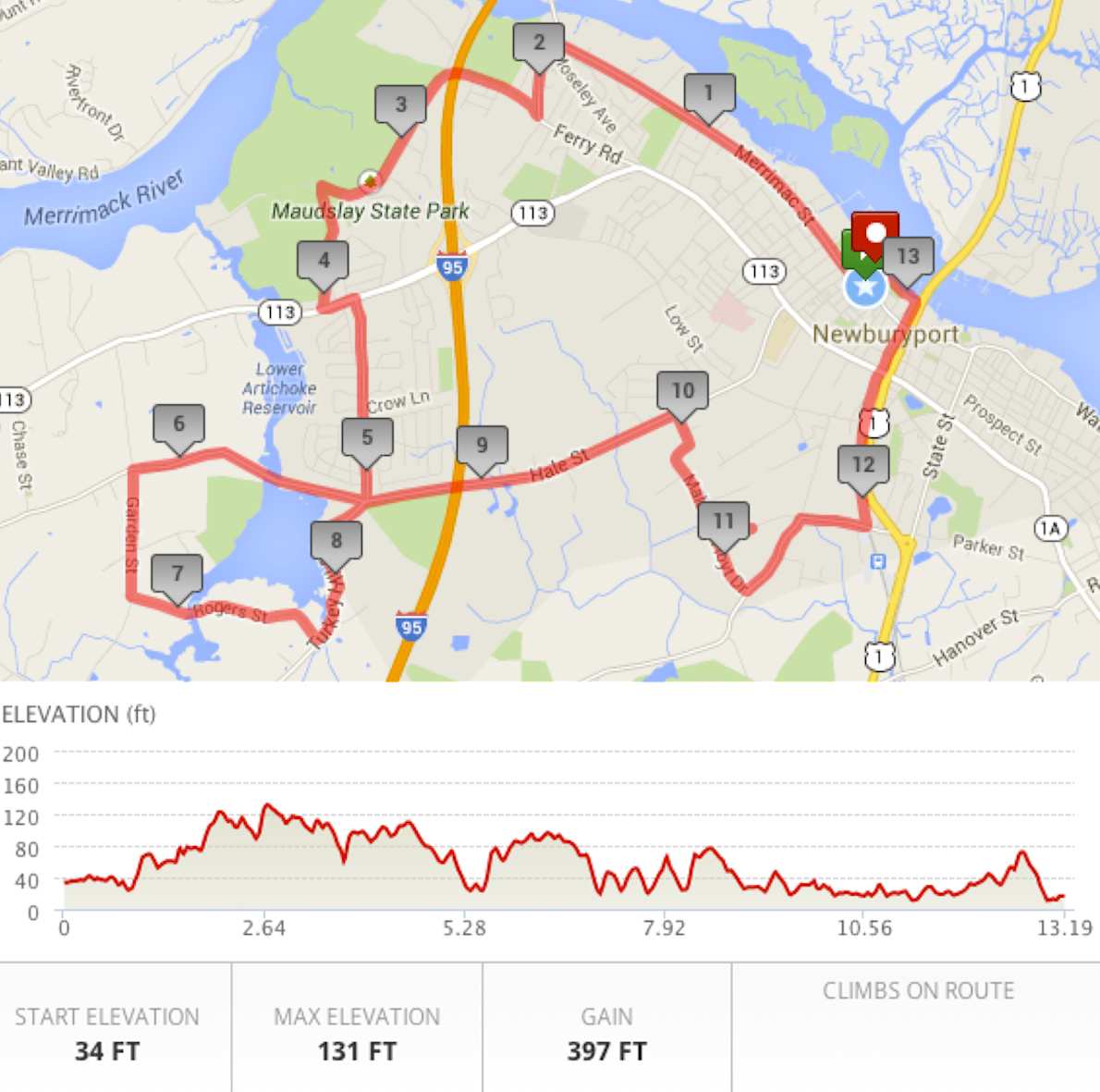 The race takes runners through one small part of what is known as the Massachusetts North Shore, the string of towns and cities along the coastal area between Boston and New Hampshire, which is known for the stark beauty of its rocky coastline and beaches as well as its distinct culture and history.

Along the North Shore lies the town of Salem, Mass., where the infamous Salem Witch Trials were held back in the late 1690s, and then further north lies Gloucester, which served as the setting for Sebastian Junger’s 1997 nonfiction book The Perfect Storm.

In addition to the natural beauty of the coastline, Newburyport is famous for its walkable city streets, retail shops and inns, and it’s these areas that runners will trek through on the out-and-back loop route for the half marathon, which starts and finishes near the city’s Cashman Park. A small, family-friendly waterfront park that lies along the Merrimack River, Cashman is also where the finish line lies overlooking the river, almost literally a stone’s throw from the starting line.

From the starting line in front of the park on Merrimac Street, runners then head out on what is basically a counter-clockwise loop through the city, heading first in the direction of Moseley Pines Park and Maudslay State Park, which is perhaps most famous as the former Moseley family estate and today is home to gardens, meadows and woods filled with tall pines as well as azaleas and rhododendrons that bloom in the spring.

Runners will make their way along the park’s eastern edge, along Pine Hill Road and Hoyts Lane, before turning off onto Main Street and then onto Turkey Hill Road.

The next stretch of the course takes runners around the southernmost of two reservoirs that extend out from the river, as runners make their way around the Upper Artichoke Reservoir. Like the rest of the course, this stretch features only gently rolling terrain, and runners will cross over the water twice on their way around the reservoir before rejoining Turkey Hill Road on the way toward Hale Street, which brings runners out of the more rural and natural areas outside the city and back into town.

The final few miles of the race mark a return to the city’s intown neighborhoods, as the course turns off Toppans Lane and onto High Street. Runners can expect to find themselves running along tree-lined streets with historic homes, many of which still feature what are known as “widow’s walks,” areas on the roof where wives and families could climb up to view ships returning to port, hopefully bringing home their husbands, sons, brothers and fathers.

Runners finish the race of course back where they started, at Cashman Park, where plenty of food, beer and music will be waiting.