Crossing the TCS New York City Marathon finish line in Central Park is one of the thrills of a lifetime! Here's what to expect: MarathonFoto will take your picture and video as you cross the finish line. Keep your race number visible, look up, and smile! Soon after, a volunteer will place a medal around your neck. You'll receive a HeatSheet presented by United Airlines and Foot Locker. You'll receive a TCS New York City Marathon Runner Recovery Bag presented by Hospital for Special Surgery containing Poland Spring® Brand 100% Natural Spring Water, Gatorade® Recover beverage, Gatorade® Thirst Quencher, a PowerBar, a New York State McIntosh apple, and Snyder's of Hanover pretzels. Medical aid will be available throughout the finish and post-finish areas.

Fluid stations are at located every mile along the course beginning at mile 3. They will provide: Poland Spring® Brand 100% Natural Spring Water (Also available at the start and finish) Gatorade® Endurance Formula™ - Lemon / Lime Flavor (Except for Mile 17). Fluids will be dispensed in recyclable cups on tables on both sides of the course. To avoid the bottleneck at the first table, get a cup from a later table. Please keep moving after you pick up your cup.

The time limit for this course is 8½ hours.

We provide Participants with race bibs that contain a device called a “B-Tag” designed to record race ... location points over a given race course for purposes of timing and scoring Participants’ Events. 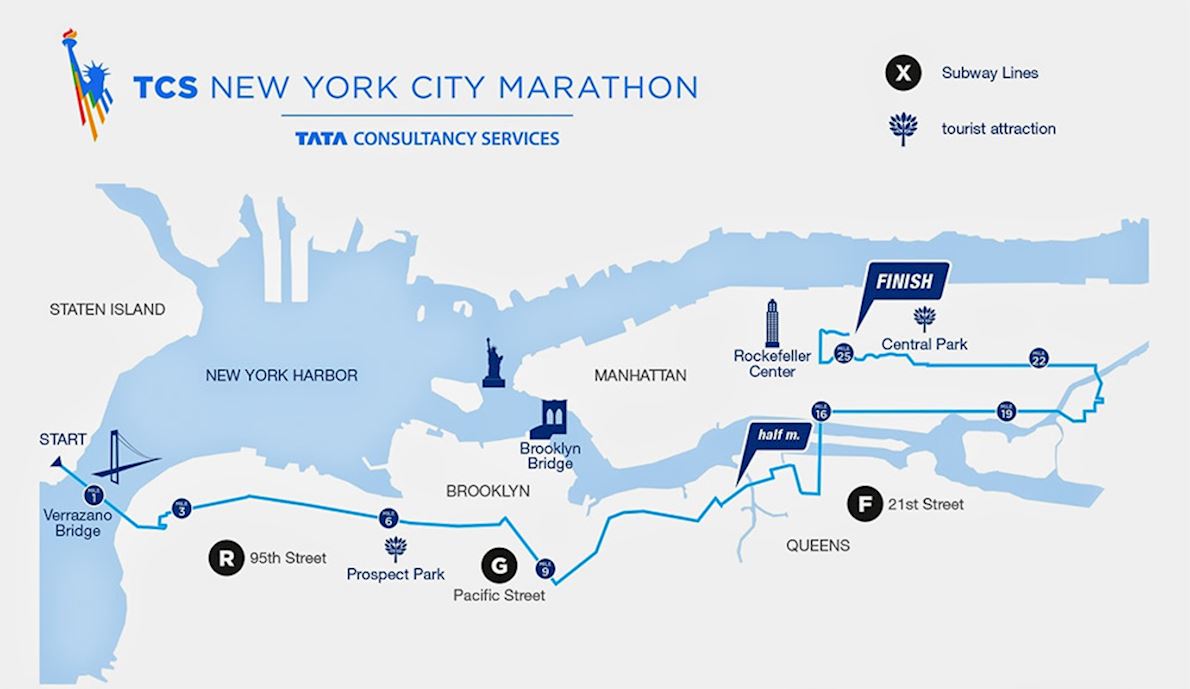 Tavern on the Green in Central Park

The New York Marathon was established in 1970 by Vince Chaipetta and Fred Lebow but was held exclusively within the compounds of Central Park.The first race consisted of over 127 registries, of which only 55 men completed by crossing the finish line, and the one female who entered, didn’t make it due to illness along the path.Winners of the first marathon were given recycled bowling and baseball trophies along with cheap wristwatches as prizes.The official entry amount for the first marathon was just $1 and the event itself had a budget of just $1000. In 2012, the marathon was canceled due to the enormous destruction of Storm Sandy. In November, however, thousands of runners joined to show their support by running through Central Park and Staten Island, to bring attention to the needs of those suffering through the effects of the storm.