Nestled among the hills and mountains of Northern California’s San Ramon Valley, Danville has long been considered a suburb of nearby Oakland and San Francisco — and one of the Bay Area’s wealthiest suburbs at that — whose tree-lined neighborhood streets and quaint downtown shops and restaurants form a sort of enclave within the surrounding mountains, from Mount Diablo to the town’s east to the Las Trampas Hills to its west.

Welcome to the annual Danville Half Marathon and 10k. Both races are out and back, along the Iron Horse Trail, winding through the small towns of Danville and Alamo, California. We are pleased to be teaming up with the Semper Fi Foundation again and the Danville Veterans Community in an effort to raise awareness and money for the valiant that have fought for us and lost in some way. All proceeds from the race will be donated!

There will be aid stations roughly every 2 miles with water and a sports drink. At the half marathon turn around we will also be providing snacks.

There is a 4 hour cutoff for the half marathon, so the course will close at 12:00 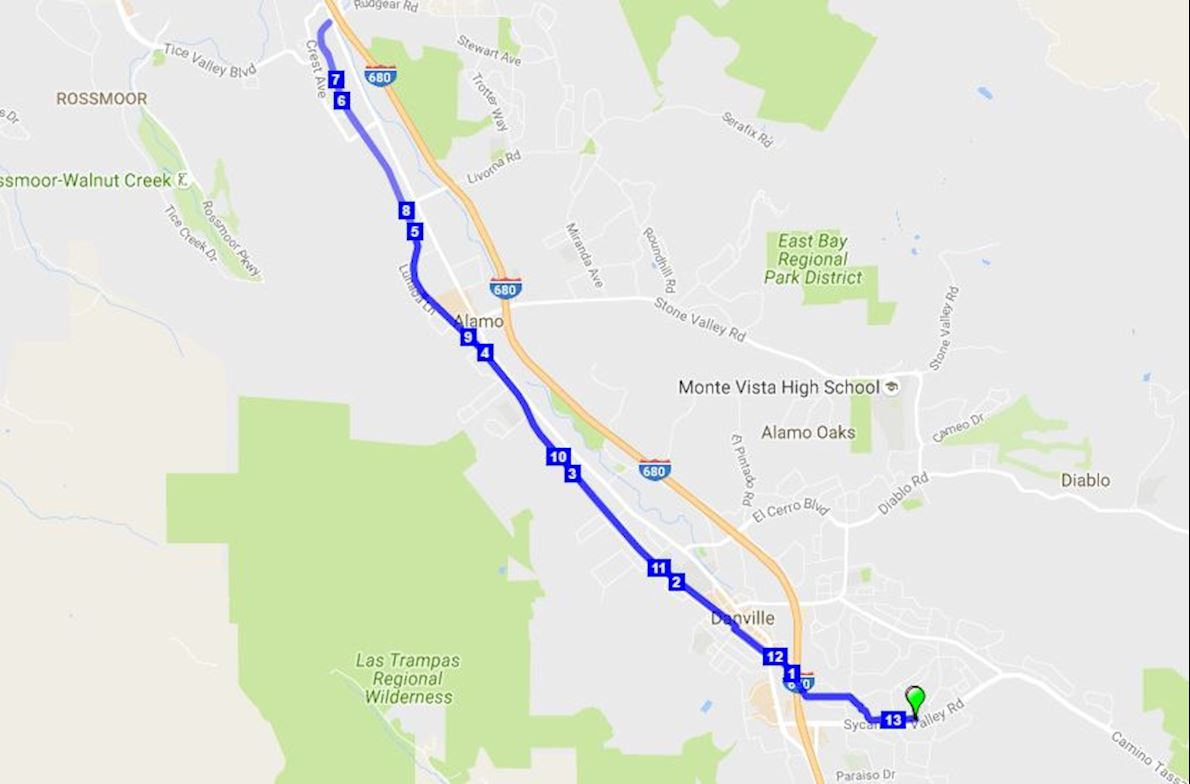 Runners will get to see much of what gives the town its charm at the Danville Half Marathon. For this year’s race, runners will follow an out-and-back route along the Iron Horse Regional Trail, a 20-ft.-wide paved trail that, when complete, will stretch more than 30 miles and connect 12 cities and towns here in the Bay Area.

Once used as the rail line for the Southern Pacific Railroad that first traveled here through Contra Costa County back in 1891, the railroad was abandoned in the late 1970s.

The first sections of what is now a paved walking, jogging, biking and running trail opened in 1986, and today the trail incorporates several of the former railroad bridges along the former rail line and will eventually stretch between Livermore in Alameda County all the way northward to Suisun Bay.

The race begins at the Latter-Day Saints Church on Old Orchard Road in Danville, where runners will start the race and head west onto the Iron Horse Trail, whose entrance lies just a short jog from the church.

There are a couple of brief stretches along neighborhood roads near the church — along Freitas Road and Laurel Drive — but otherwise the remainder of the course unfolds entirely along the Iron Horse Trail, as runners head northwest along the trail all the way up to the half-way turnaround point, which lies just before runners reach Danville Boulevard.

Once there, runners then turn around and head back south along the trail, covering the same route they’ve just run in reverse, from Walnut Creek through Alamo, all the way back to Danville.