See other Marathons in enero

You’ll get the chance to run among the orange, lemon and grapefruit groves of California’s Inland Empire at the annual running of the Citrus Heritage Run which unfolds along an out-and-back route that starts and finishes at Riverside’s Arlington Heights Sports Park, and features a challenging and scenic course.

The Citrus Heritage Run is a full marathon, half marathon, 5K and 1 mile kids race in January. This unique and “sweet-smelling” course winds through the historic orange groves of The California Citrus Historic State Park in Riverside, Ca.

We offer high quality technical fabric tees in men’s and women’s sizes, finisher medals, and age group awards. Along the course you will find entertainment and several hydration stops. At the finish line, you will be greeted with post-race refreshments to include fresh orange slices, a warm cup of chili and a celebratory beer!

The Citrus Heritage Run is an experience you won’t want to miss!

Enjoy shopping and sampling in our post race festival! There will be several vendors showcasing the latest in sports apparel, health and nutrition, and sampling food and drink items.

There will be several water stations and portable toilets available along the course located approximately every 1.5 miles. On course support will also include an electrolyte replacement drink, orange slices and Gu.

There will be a 6.5 hour time limit for the full marathon course. For all other events there will not be a time limit. As always do your best to finish in the most time-efficient manner.

All participants will receive professionally timed results. We will be utilizing the b-tag timing chip, which is attached to the back of your bib. Your bib must be visible and worn at all times to receive a final time. Your timing tag will activate and start once you cross the start line timing mats. 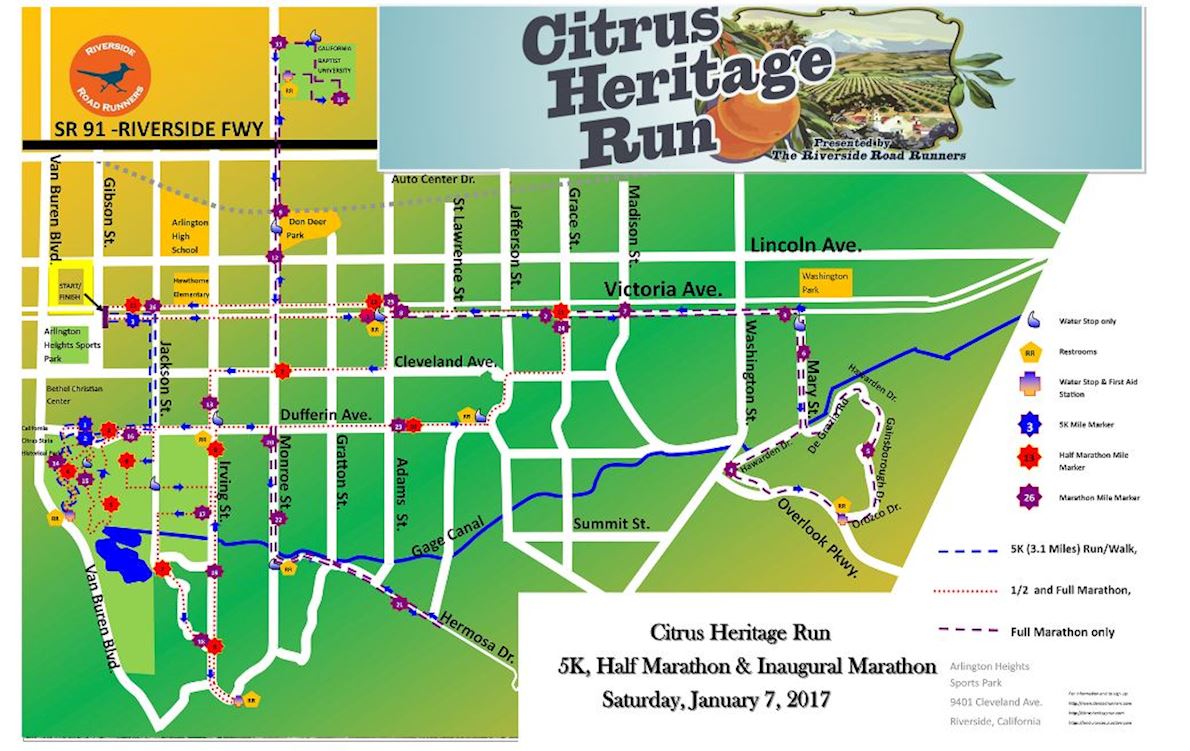 The race begins near Arlington Heights Park on Victoria Avenue in Riverside, a city of more than 310,000 people roughly an hour east of Los Angeles and whose history dates back to the 1870s, when the U.S. Department of Agriculture sent a pair of small orange trees to a local resident named Eliza Tibbets.

After she planted the trees in what turned out to be the perfect soil and climate for growing citrus fruits, word spread about the region’s sweet and flavorful oranges. Within a few years an industry was born, and California experienced a kind of second “Gold Rush” (after the 1849 one) as would-be fruit growers poured into the state, and began growing lush groves of oranges, lemons, and many other fruits.

From the starting line on Victoria Avenue, runners head first northeast for the first mile, and then turn right onto Adams Street, and then again onto Cleveland Avenue. These first few miles unfold along a very gradual ascent as runners make their way south toward the California Citrus State Historic Park, a 248-acre park that’s bisected by the Gage Canal, and is really an open-air museum for the state’s citrus industry.

Once they make it into the park, runners will head along a slight up-and-downhill as they complete an out-and-back stretch just past the mile 4 marker. Next, they head deeper into the citrus groves and this is where the hills become more challenging.

The next few miles around the middle portion of the course — miles 5 through 8 — feature an elevation climb of about 200 feet, out in the open sun among the citrus trees. After they pass between miles 7 and 8, the course begins heading downhill again along Irving Street, which brings them north past rows of agricultural fields filled with plentiful fruits, rose gardens and palm trees.

The final few miles of the race keep bringing runners north along Dufferin Avenue, Jefferson Street, Cleveland Avenue, Grace Street and Victoria Avenue, the stretch that begins the fast downhill back in to the finish line at Arlington Heights Sports Park.