See other Half Marathons in febrero

What could be more romantic than a fast and scenic 5K, 10K or half marathon by the bay?

Compared to many of the other races staged by the locally-based Brazen Racing group — which hosts road and trail races around the San Francisco Bay Area throughout the year — the Bay Breeze Half Marathon, 10K and 5K is aptly named, the organizers say, as the course is definitely a “breeze” compared to most of its other, hillier events.

All race distances start and finish at the San Leandro Marina Park! Whether you are a frequent race winner or a first-time runner/walker, you've got a lot to look forward to. All participants will enjoy a mostly-flat, easy bayside trail that rarely strays more than a few feet from water. A perfect course for those looking to set a personal record!

As with all of our races, aid stations will be fully stocked with water, sports drink, gels, pretzels, candy, etc. Aid Stations course: 5K: 1, 10K: 3, 1/2 Marathon: 5. Aid station locations are shown on maps above. Those needing water more frequently are encouraged to carry a water bottle or hydration pack.

There are two very small lots close to the start/finish area. There is also a lot of public parking in the area circled in yellow in the below picture. Do not park in the golf course lots or in spots reserved for boats and please pay attention to all signage to avoid any other "no-parking" zones. 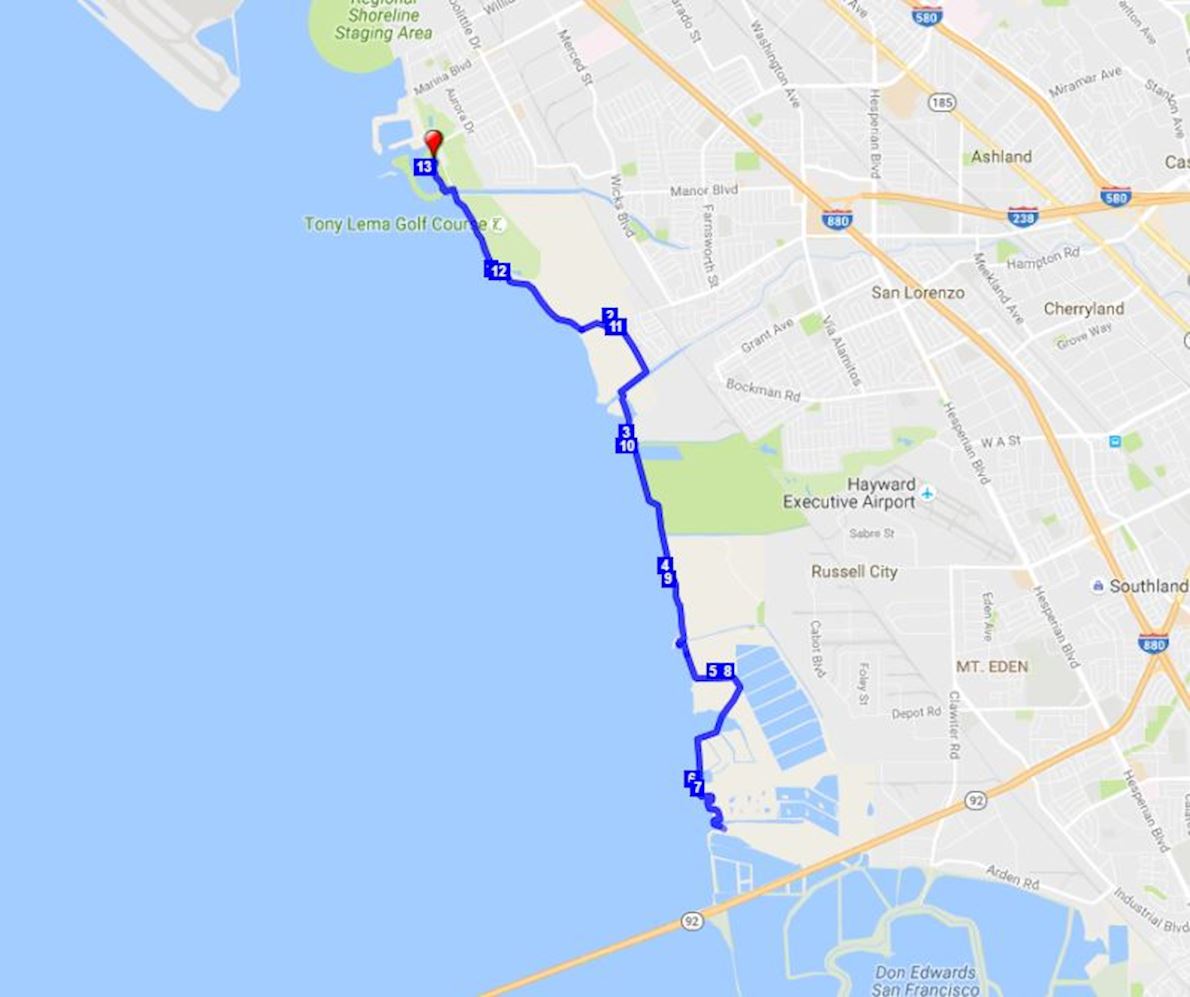 The half marathon here offers a refreshing mostly trail run that never strays too far from the water along the Hayward Seashore area, which features a mixture of paved and gravel trails that wind their way through its salt and freshwater marshes, instead of miles of single-track trails through hilly and sometimes mountainous forest areas.

Cobbled together over the years from a combination of natural marshes along the bay as well as man-made marshes (part of restoration and enhancement projects to bring the area closer to its original, natural state), Hayward today is a magnet for runners, walkers, hikers, bikers and fishermen amd women, who venture out onto its five miles of trails along the seashore and wander out to watch the birds who nest here throughout the year.

The race starts and finishes at the San Leandro Marina Park, a small 30-acre park that lies alongside the shoreline overlooking the San Francisco Bay, and hugs the shoreline for the entire race route. From there, runners follow southward along the shore, all the way down to the turnaround point just north of the San Mateo Bridge. Once runners hit the turn, they then head back along the exact route they’ve just run.