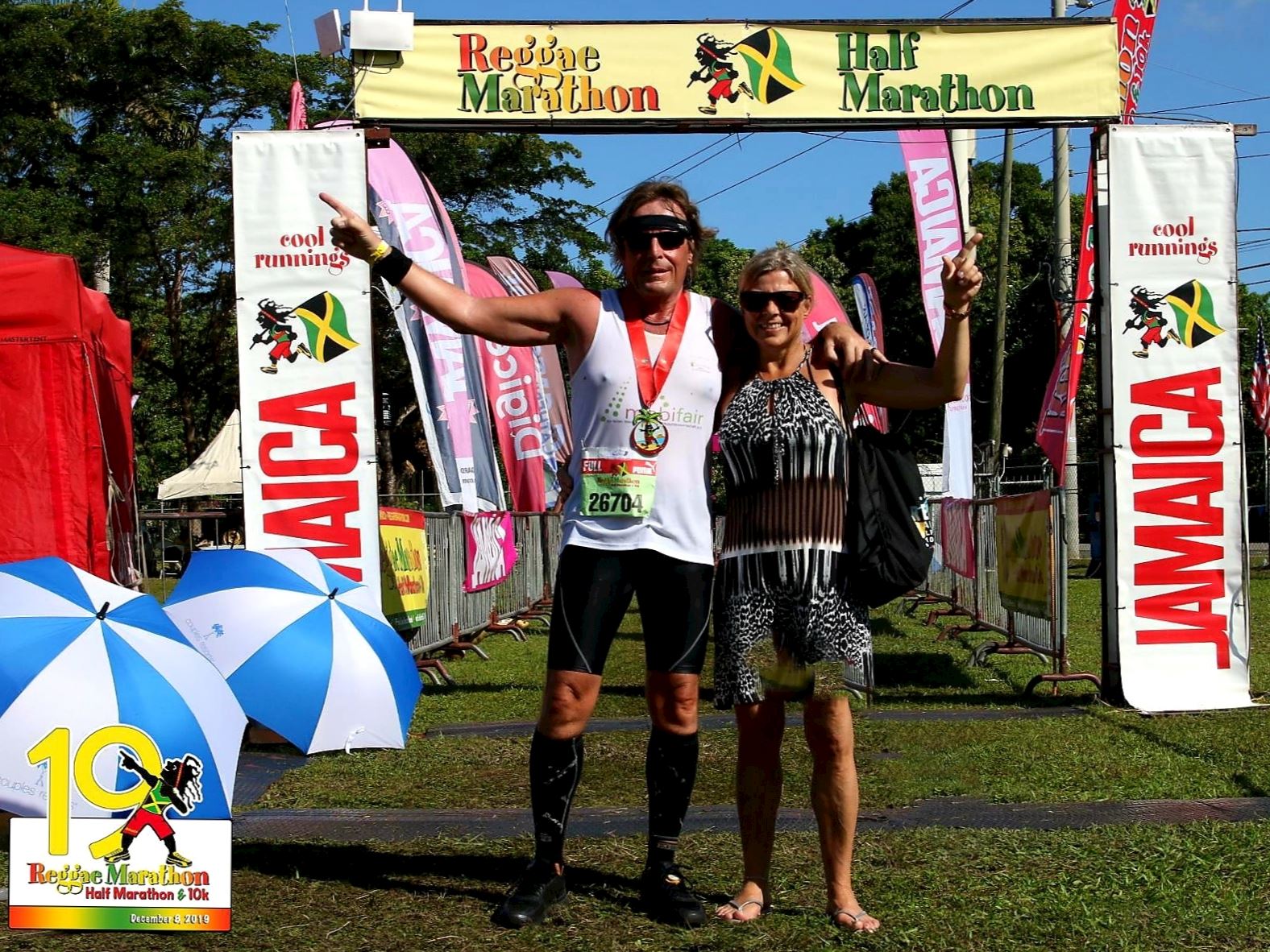 This year's Reggae-Jamaica Marathon took place on December 8th, 2019 in Negril, Jamaica. A very special place to run a marathon, because here in Jamaica the 8-time Olympic champion and 11-time “sprint world champion” Usain Bolt was born. Negril is located in the west of the island, about 70 kilometers from Montego Bay.

After we had traveled a week earlier, explored the island (in the footsteps of Bob Marley) and got to know the Rastafarian culture, the starting signal for the 19th reggae-Jamaica- was given on Sunday, December 8th, 2019 at 05:15. Marathon. The temperatures here are around 30 degrees C all year round, which don't seem much cooler at night than during the day. After a great and perfectly organized pasta party the night before, the catering of which was carried out by well-known hotel chains, you could listen to the sounds of reggae music and more. strengthen with "Rasta Pasta". As previously announced, the party was an absolute highlight that should not be missed.

The next morning, about 2000 runners from 30 countries gathered before the start, of which only 104 participants had taken part in the full distance (42.195 kilometers). Everyone else ran half the distance or took part in the 10 km run.

The route initially led us along the "Seven Mile Beach" in a southern direction to the first turning point, which was already reached after 3 kilometers. Then we walked along the coastal road, which was otherwise closed to road traffic (except shuttle buses) for the entire event, about 11 kilometers north, until after the second turning mark we went 7 km back to Negril to the start / finish area. Here the “half marathon” was received by an enthusiastic crowd, with great cheers and loud reggae music.

In order to finish the marathon, we had to take the running route a second time. The second round demanded a lot from the runners, since the sun has now risen, which immediately lived up to its name. The mood during the marathon was unique, the rhythms of reggae music sounded everywhere, which had a very motivating effect on the group of runners. The supply of water, isotonic drinks and bananas after every kilometer was commendable and could not have been better. The Jamaican standard saying "No Problem", which was called to us again and again, inspired and gave no thought to "get out" prematurely.

"You can't find the right way on a paved road," said Bob Marley! I have to contradict him after this great event, because the road was paved and the way was the right one. After 4:38:13 I reached the finish satisfied and with my time took 48th place out of 104 participants, 37th place out of 70 (male) and 5th place in my age group.

The coconut milk and the Jamaican beer, which was served in the target area and the subsequent jump into the "Caribbean floods", made the "strains" of the heat battle very quickly forgotten. All running enthusiasts who would like to use a dream vacation to run a marathon, half marathon, or the 10 km distance, would highly recommend Jamaica. The Reggae-Jamaica Marathon and the associated Jamaican “High Five”, reggae, sun, beach, running miracles and high feelings will remain in my memory very well.

The Jamaica Reggae Marathon is now my 94th marathon, the 51st for the Children's Hospice Bärenherz Wiesbaden (www.baerenherz.de) and thus my last in 2019. Now I'm really looking forward to my personal highlights 2020, u. a. the Jerusalem, - Curacao, - and New York Marathon.