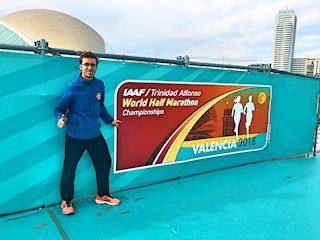 Last Saturday, March 24th the half-marathon world championships were held in Valencia, "Ciudad del running". At 5:05 pm the elite athletes started, while the men's race started at 5:30 pm. Following the professional athletes over 14,000 amateur runners from all over the world have run on the same path in the "Carrera popular", among them I was there with the luck of being able to experience firsthand the adventure of running a world championship.

The expo and the start/finish areas have been set up in the new architectural structure that houses the museum of arts, science and technology, under the evocative gaze of Calatrava's Eye. Thanks to the careful and expert choice of the agency we have been approaching, we have had the opportunity to stay at the Eurostar Rey Don Jaime hotel a few hundred meters from the points of interest for the race.

The departure from Italy was scheduled for Friday, a day dedicated to some short walk to the city centre, while Saturday morning was spent taking photos as a ritual and having a supervision of the route. For lunchtime the hotel has set up a carb-meal for all athletes present (optional and with an additional cost of 20 euros, but highly recommended), based on pasta and rice accompanied by steamed salmon, grid tuna or chicken, in order to meet the needs of the runner and everyone's taste.

Early lunch at the hotel allowed us to retreat to the rooms around 1 pm, so we could arrange the punching of the bibs to the social jerseys and enjoy a necessary rest. 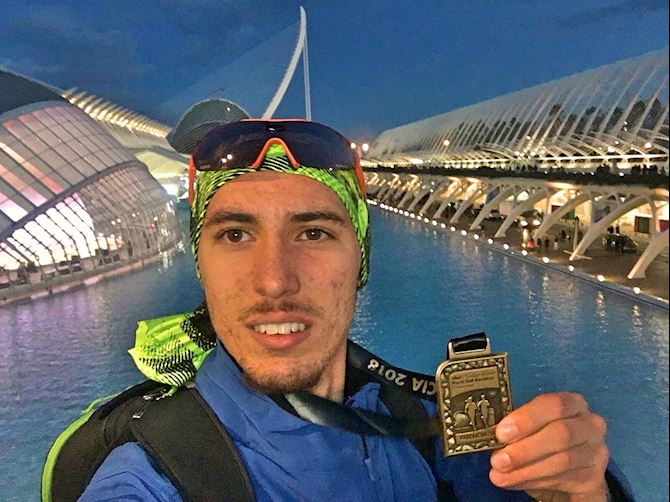 At 3:30 pm, everyone is again active to go to the bag deposit area (many have chosen not to use the hotel's proximity to the arrival). The time limit for delivery was in fact at 16:30. At this point, I had a small accident: due to the wind, the adhesive label of my bag was lost, not allowing me to leave my bag safely. Timely, in the middle of the storage area, a steward delivered me a new one, writing the bib number by hand. Minutes lost for the operation no more than 5, congratulations to the organization!

Short and rapid warm up in the areas adjacent to the grids, a classic "trip" to the chemical bath and entry into the grid of competence about ten minutes before the start of the women's race.

The wait for the shot was long, 40 minutes waiting for 17: 30. To deceive the time and dispose of the adrenaline a little, I dedicated myself to some exercises of dynamic stretching on the spot and to the exchange of ideas with those who would be my running companions. A unique emotion to be in the midst of so many people never seen before yet feeling somehow united in the sharing of a more unique and rare event.

Finally, the official start. An explosion of support from the stands and the barricades, many people applauded and urged. Absorbed by this climate and driven by a large group of runners, I found myself in the passage of 3Km without realizing it and at a 10k pace! From there, I realized that if I wanted to reach my goal it was time to keep calm and run with my head, then my heart. So, I find a fast and sustainable pace and I continued my race. Always with around a multitude of athletes, but never with the need to change direction or make sudden changes of pace due to traffic.

Towards the eighth kilometre a few drops of water fell down from the sky, which was not annoying for the perceived temperature, but because of the sudden loss of grip of the shoes on the ground during the pushing phase. During that fifteen minutes, I lost a few seconds, but I was aware that the second part of the race would have been almost completely downhill, so I did not lose heart. 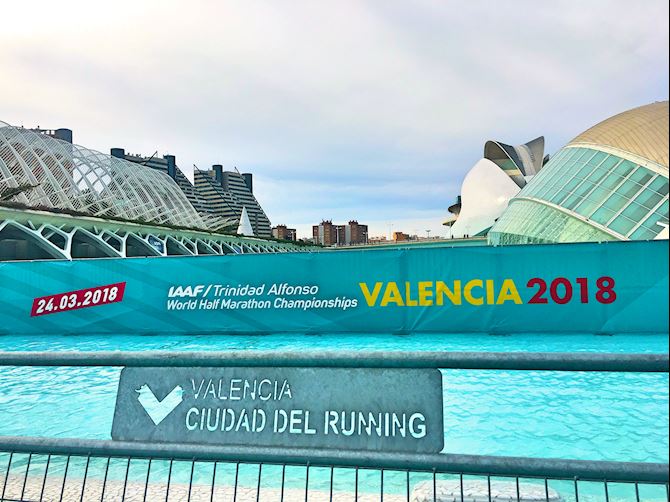 From the thirteenth I began to accuse the blows of fatigue (and the too much boldness first kilometers). Unfortunately, I was not even able to completely drink the energy gel because of a contracted stomach by the effort. In any case, I was ready to honor this race up to the last meter, trying to constantly give my best. In support of this situation the Valencian population intervened even more numerous at the streets of the city center, it was the central part of the race, from about the fifteenth to the eighteenth kilometer. An exciting heat was released by those people. It was so loud that it covered even the incessant roll of the drums of the many bands on the sides of the track.

At times I thought I had taken part in a cycling event, the side barriers had disappeared so that adults and children could join the runners, trying to give them a five or screaming: "ANIMO CHICOS, ANIMO!".

I think those three kilometers will remain etched in my memory for a long time. At the end of this triumphal gallop, I feel all the fatigue coming out all at once, the one caused by the acidosis of the muscles, which start to burn hard. "This is where the race begins", I repeated myself several times, trying to distract myself. The twentieth kilometer was the hardest and it seemed a never-ending one. Then, like a mirage, the sign with the intermediate time measurement. It's time to clench your teeth and face the last effort. At 700 meters from the finish a little downhill, that I thought could have helped me to fast my legs for the final effort, led me to a slight slowdown because, by now, my acceleration faculties were reduced to a minimum. Luckily, a few meters ahead of me a group of riders was keeping a good speed so I tried to chase them.

A last turn to the left at 100 meters from the finish line before the real magic: the blue of the walkway mixes with the clear water of the adjacent pools, not far away two crowded grandstands praised everyone’s arrival. For a moment the fatigue disappeared and legs turned in speed as if they were pushed by a force given directly by that atmosphere. Who has already had the opportunity to conclude a race here knows what I mean very well. To those who have not yet tried this emotion, I only say that only those 100 meters are enough to repay the journey and the effort made to get to that specific point.

I crossed the finish line and, with the view a bit 'clouded, I could read the result: 1h20'27 (real time), which means 31st Italian non-professional runners, ninth in U24 category, first Italian runner U24. But above all, it means having reached the goal I set for myself when I started thinking and dreaming about this trip. It means having reached my PB on the half marathon! In the end, the real challenge is never to overcome others, but try to reach and overcome our very personal little-big "walls".

Now I can say with a hint of pride, I ran a half marathon world championship to the best of my current possibilities, with the spirit of a passionate amateur greedy for hopes, dreams and ambitions. As Pietro Mennea one time said: "Fatigue is never wasted. You suffer, but you dream".