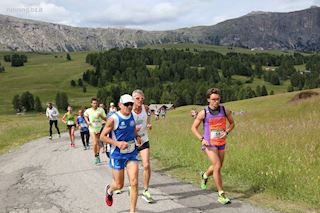 Summer, the period of elevated temperatures when cities are less attractive due to their unpleasant, hot asphalts. That’s why I decided to spend a few days far from Milan to continue practicing my running activity without suffering of “persistent dehydration”. So, I moved in Trentino - Alto Adige where a famous Italian running trainer was organizing a training camp focused on the improvement of running technique (http://www.fulviomassini.com/).

To immediately practice the new suggestions all the group decided to take part in the Seiser Alm Half Marathon (http://running.seiseralm.it/it/mezza-maratona.html), planned for Sunday 2nd July 2017.

Subscriptions were closed to 700 bibs, it could seem a “small” number but it’s necessary for organizers to guarantee a safe race all along the route.
650 athletes were present at the start line, just 13 didn’t cross the finish one (impressive result considering the race difficulty!). There were two different starts: at 10 o’clock bibs from 1 to 340, 10 minutes later all the others. This is another expedient by the organizers to guarantee safety. My bib was the number 54, so that I could run with the first group. I could recognize athletes from different countries: Italy (of course…), Switzerland, Austria, Germany. All countries on the border and not far from Dolomites mountains.

As far as I’m concerned, this was the first time I took part in a 21k at the mountains (1850m the start/finish line, 2100m the highest peak with 500m D+) and I can say it was an exciting experience, different from all the races I ran so far. Immediately, I realized that it would have been a mental and muscular race, set a regular pace wouldn’t be enough.

In fact, already after 2,5Km started the first climb that accompanied us for other 2,5Km. Than a fast downhill that brought the athletes to kilometer 9, where there was a short link with the streets covered around kilometer 2, but there was no problem with the encounter of the slowest participants. It was impossible to get the wrong direction or to be slowed.

After a couple of easy kilometers, we found ourselves in a wood, which brought us to the peak of the mountain. This is the most difficult part of the race: first because it is the central part (from kilometer 11 to 15), moreover the climb is very hard with peaks of 10-15% inclination.

Gained the peak (remember: 2100m altitude!), I assumed a carbo-gel to recover some energy and continue my run. However, I suffered an “oxygen crisis”: my lungs couldn’t bring the right amount of oxygen to my legs… in that situation I decided to slow my pace and continue on a more aerobic rhythm. The strategy allowed me to gain the 18th Km refreshments in decent conditions. After drinking some water and passing through a “mentally-devastating” turning point at 18,6Km, I collected all my energies at the 19th Km and attacked the downhill of the last 2,1Km. I ran the day before on that same segment and I felt very confident, this is witnessed by my Garmin track that measured a peak speed at 18,7 km/h! Final result: 1h43’21, 51th position overall.

When I crossed the finish line I felt very tired (my legs’ muscles hurt for 2 days!), but at the same time I was amazed by the beauty I found on that mountains.
On my neck, there was not just a wood medal symbol of the environment where the race takes place, there was a sum of emotions and effort that only a “first-time” race can give. I’ll never forget this hard, but satisfying half marathon. Thank you, Sieser Alm!