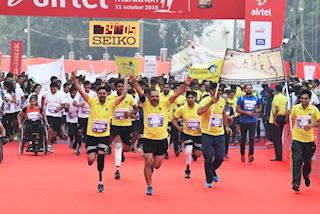 The Airtel Delhi Half Marathon is one of the world’s most prestigious half marathon. This US$ 280,000 race is India’s only IAAF Gold Label Half Marathon. Known to be one of the fastest courses in the world, the event has become a permanent fixture for world-class athletes and India’s best. The race also represents the heart and soul of the city where over 34,000 participants from across the country come together on that start-line as one. The event has successfully changed the mind sets of people in Delhi and got them to witness and understand the magic of distance running.

In addition to the feature race 21Km, the event has something special for everyone ie, the Great Delhi Run – which is carnival and citizens run to raise funds of various causes. Incidentally, the event is one of the largest fund-raising platform in the country, having raised since inception INR 40crores.

The Champions with Disability – an inclusive fun race for any participants with disability, Senior Citizens – a run for the silvers an opportunity for them to be part of a bigger platform and a newly introduced 10K.

- Age Category wise Prize Money for all the HM age category runners
- The first 1000 half marathon finishers receive exclusive Puma Finishers Tee and a Puma Race Day Tee for all registered half marathon participants.
- Special Puma Warm-up zone ahead of the race, Volini recovery zone equipped with experts, special customised breakfast for all participants, ample on-route facilities such as vehicular traffic free roads, Bisleri water stations and ORSL restoration zones, and Nature Valley energy stations. Exclusive finisher medals for all of the participants. Besides, the Mirchi Get Active expo that gives our runners great experiences and chance to meet and greet with world-class athletes and ambassadors.

The Airtel Delhi Half Marathon START and FINISH at the famous Jawaharlal Nehru Stadium that was also home to the Commonwealth Games. It also is one of the most picturesque road races. It passes through many of the city’s iconic locations such as Rajpath, Sansad Marg, Mathura Road, Lodhi Road, Delhi Golf Club and India Gate.

How would you describe the race route?

Our race saw over 34000 participants across all categories and all of them were given utmost attention and priority when it came to their health and safety. Our Medical Partner Max Healthcare arranged the safety measures for all the runners with a fully equipped base camp, 35 beds at the finish line and six medical stations along the route. There were medical personnel present at the finish line equipped with stretchers and wheelchairs to attend to emergencies along with eight ambulances and seven medics on bikes along the race route to ensure help is made available at all times. 75 Doctors were deployed on Race Day spread across the Medical stations and base camps. There was a Spotter placed every 100m during the last 2 kms of the race to identify participants who need medical attention.

Delhi is the capital of India and a city rested in History. There are many famous places to visit like Red Fort, Qutub Minar, Jama Masjid, India Gate, Jantar Mantar, Humayun’s Tomb and for gastronomical experience, the street food at Chandni Chowk is a must. Besides, the Dal Bukhara (Black Lentils cooked in cream) is also a delicacy which originated from this city’s well known fine-dine restaurant called Bukhara at Maurya Sheraton. The must visit wonder of the world, Taj Mahal in Agra is also just a couple of hours drive from the city.

The race has been the choice of champions for years now. In 2005, the inaugural year, Kenya’s Philip Rugut won the race. Ethiopia’s Deriba Merga won the back-to-back events in 2008 & 2009. Also Ethiopia’s Birhanu Legese won the race in 2015 & 2017. Rio Olympic Champion & current Marathon world record holder Kenya’s Eliud Kipchoge won the race in 2016. The event course record is in the name of Ethiopia’s Guye Adola’s name, who achieved the feat in 2014 edition.

In the Women’s category, Ethiopia’s Aselefech Mergia and Kenya’s Florence Kiplagat won the race twice. Aselefech won in 2008 & 2010, while Florence won at the 2013 & 2014 edition. Ethiopia’s Tsehay Gemechu this year got the event course record in her name despite having a strong field including half marathon world record holder Joyciline Jepkosgei and multiple Olympic champion Tirunesh Dibaba.

The race also has seen an array of sporting legends come in as ambassadors for the event. Olympic champions like Sanya Richards-Ross, David Rudisha, Anthony Ervin, Javier Sotomayor, Cathy Freeman, Donovan Bailey and World champions like Asafa Powell have graced the event with their presence.

﻿Do you expect many international runners in the race?﻿

The Airtel Delhi Half Marathon offers highest Individual prize money for Elite athletes anywhere in the world. Because of its location, the course and weather conditions and the colourful nature of the city, it always attract runners from across the world.