A new event record in the Mattoni Olomouc Half Marathon. 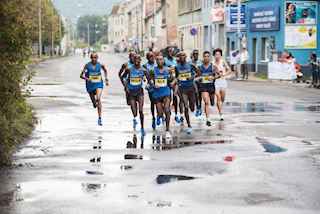 First across the finish line of the IAAF Gold Label Mattoni Olomouc Half Marathon was RunCzech Racing team member Stephen Kiprop breaking the race record with a time of 1:00:15. Meanwhile Ethiopian runner Netsanet Gudeta proved herself the best among the women securing a confident victory. When it came to the Czechs Jiří Homoláč reigned supreme in the men’s category with Eva Vrabcová – Nývltová enhancing the Czech Olomouc best by more than fifty seconds, just nine seconds under her absolute best time.The race was headed for quite a while by a large group featuring the race favourites. The elite pack only started to split up at the sixteenth kilometre leaving Stephen Kiprop and Jemal Yimer at the helm. The battle between the promising Kenyan talent and a favourite from Ethiopia was eventually won by RunCzech Racing team member Kiprop who managed to pull away from Yimer at the 18th kilometre. “Already before the race got underway, I had my sights set on breaking the event record and I’m delighted that my plan worked out. The wind wasn’t half as bad as it seemed at the start, though if it hadn’t been there at all, I could easily have run thirty seconds faster. Even so I really enjoyed the race,” revealed the happy winner, whose new race record now stands at 1:00:15. Jemal Yimer took second place finishing in 1:00:37 followed by another RunCzech Racing team member Abel Kipchumba (1:00:57) in third. Czech favourites Jiří Homoláč and Vít Pavlišta ran most of the race side by side but in the end it was Homoláč who proved the stronger. Vít Pavlišta finished the Olomouc race second in 1:06:50 followed by Tomáš Lichý (1:07:31) in third place.The women’s race heralded a triumph for Ethiopia. The pre-race prognosis proved accurate which meant a clear victory for Netsanet Gudeta. She led right from the start leaving no room for her rivals to get close. “I feel really great about today’s race. I launched my attack early on to ensure I secured first place and I’m delighted that I managed to keep it up right until the finish line,” the Ethiopian champion revealed who finished in a time of 1:07:30. Crossing the blue carpet straight after her was compatriot Asefelech Mergia (1:09:45) followed by the best European runner Trihas Gebre in 1:09:51 which also marked a new Spanish national record. Clemence Calvin from France improved her personal best with 1:09:52 taking fourth place.In line with predictions, Eva Vrabcová-Nývltová emerged as the best Czech woman. With a good time of 1:11:10, the Czech Olympian also managed to break a new race record, just nine seconds behind her best Czech time despite the fact that she had no pacemaker. “This is a really decent time, though I am a bit sad about the few extra seconds I could have shaved off. My times at the ten and fifteen kilometres marks indicated an even better finish time but I ended up running the last part on my own and against the wind. All in all though today’s result proved to me that with proper training I can pull of a decent result at the European Championships” the Czech number one declared. Taking second place was Marcela Joglová (1:16:44), followed by Barbora Jíšová (1:18:57) in third.Over 6 160 runners entered the Mattoni Olomouc Half Marathon with more than 3 590 participants in the dm Family Run.You can watch the highlights from the race HEREResults Men1. Stephen    Kiprop | KEN |    1:00:15 2. Jemal Yimer | ETH | 1:00:373. Abel    Kipchumba |    KEN | 1:00:574. Evans Cheruiyot | KEN | 1:01:005. Justus Kipkogei Kangogo | KEN | 1:01:346. Festus Talam | KEN | 1:01:357. Meshack Kiprop Koech | KEN | 1:01:378. Roncer Kipkorir Konga | KEN | 1:01:479. Kenneth Keter | KEN | 1:01:5410. Philimon Kipkorir Maritim |    KEN | 1:03:36Women1. Netsanet    Gudeta | ETH | 1:07:302. Aselefech Mergia | ETH |    1:09:453. Trihas Gebre | ESP |    1:09:514. Clemence    Calvin | FRA | 1:09:525. Eva Vrabcová-Nývltová | CZE | 1:11:106. Lilia Fisikovici | MDA |    1:11:437. Antonina    Kwambai | KEN |    1:11:528. Maryna Damantsevich | BLR | 1:12:329. Penninah    Kandie | KEN | 1:13:1310. Brendah Kamonya    Kebeya | KEN | 1:14:46