See other Ultra Marathons in November

The mission of Wild Trails is to encourage and promote a healthy and active lifestyle through trail running and other forms of outdoor recreation and advocate to protect and preserve land (natural spaces) used for such activities. Its objectives are: To encourage and promote the sport of trail running as a means to healthy living, wellness, and enhanced quality of life.One of the most uniquely named races in the world, the Upchuck features some very tough climbs and primitive trail running. The race is point-to-point on the Cumberland Trail, north of Chattanooga along the Cumberland Plateau, starting on Leggett Road and finishing in the city of Soddy-Daisy. It was founded on the experience of two local runners who were on a weekend training run. They stopped at a convenience store about halfway through the 31-mile route. Runner A ate lightly while Runner B ate heartily. Soon after, Runner B proceeded to disgorge his meal on the trail, while Runner A watched in disgust. The Upchuck is a no frills, no-wimps run capable of pushing even experienced trail runners to their limit.

The Upchuck 50K is heralded as an underground and low-key race of sorts, in that it stays small in nature by design, and has minimal aid stations or course markings other than the ubiquitous white blazes on trees that mark the Cumberland Trail, which it follows for its entirety. It is a point to point course which traverses three major river gorges – Rock Creek, Possum Creek, and Soddy Creek, each providing incredible terrain which had a unique feel compared to the other gorges. The Upchuck 50K is one of the toughest trail races in the country, and in just a few years has become a cult-classic, and a sought-after hardman notch in the belt. It tackles some of the most wild and technical terrain in the Cumberlands. The race entires are limited, with an admission process. and race day is bare bones, no sponsors, just “you, alone in the woods.”

As the only aid station is a convenience store, be sure to bring money and be self-sufficient for the race.

The runners park in Soddy Daisy.

Must have completed a 50K within the last 18 months, in a time of 7 hours or less.

Meet at Finish area and the bus leaves for Start @ 7:30am. 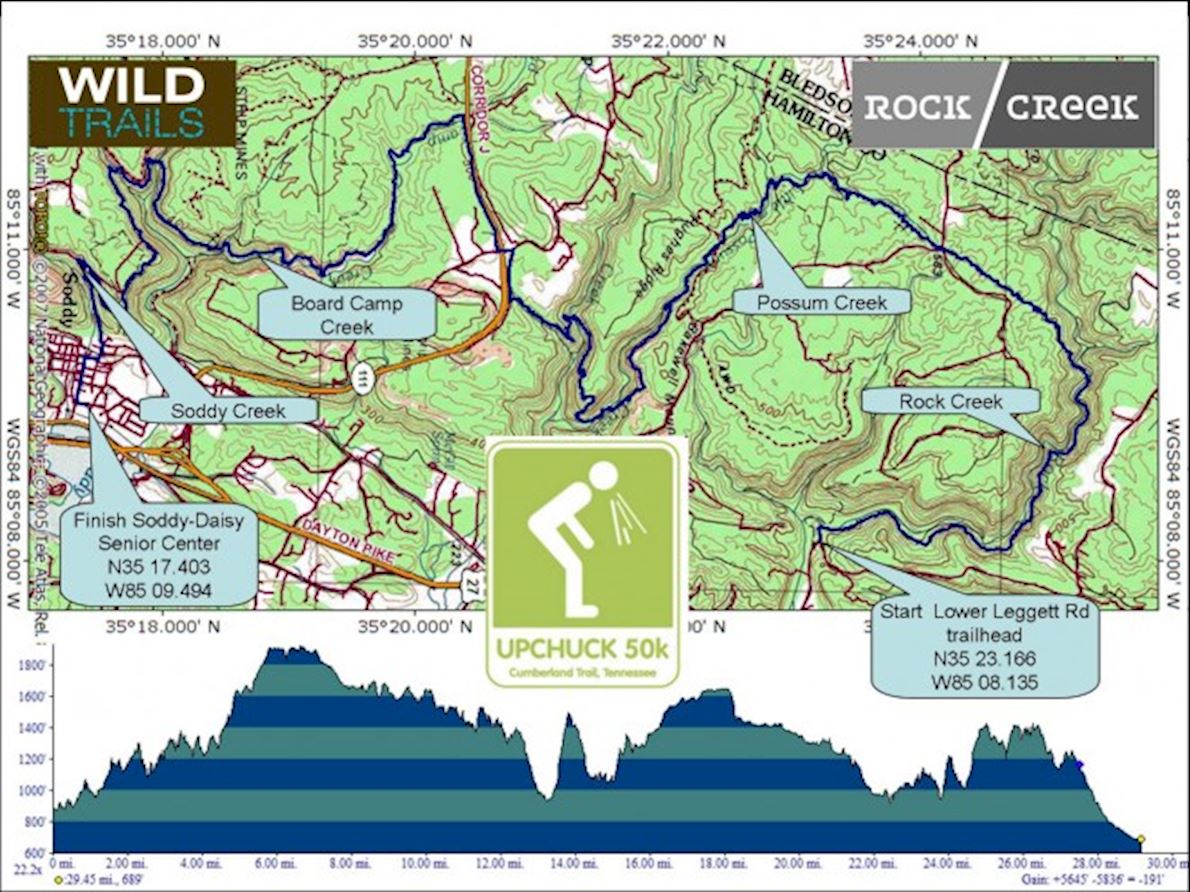 The course is divided into 3 sections by the Cumberland Trail Conference: the Rock Creek, Possum Creek and Soddy Creek sections. The run begins by paralleling Rock Creek where you'll cross a series of bridges before reaching an 80’ fiberglass bridge over the creek. You are then forced to climb out of the gorge using a ladder and switchbacks. The trail keeps climbing into a pine forest until you reach Retro-Hughes Road and AS1. Cross the road and get back into the woods to begin the Possum Creek section.

You twist and wind your way down to Little Possum Creek before arriving at your next landmark, a concrete bridge. Back into the woods on your right after crossing the bridge and Imodium Falls awaits, followed by a climb to Perkins Point and finally a winding descent to Big Possum Creek. It is then just about 1.5 miles to AS 2, Jones Gap Road.

Make a right turn on the road and head for the overpass, where you'll cross the highway and turn right to go down next to the oncoming ramp. Watch for signs and get back into the woods. This is the Boardcamp Creek section, passing through what was once an old strip mine. The running is scenic and easy until you begin another descent and climb in and out of Soddy Gorge. Once you get across Big Soddy Creek (a bridge may or may been built by then), you are almost home. At the next road, Hotwater, go left on the pavement and down into Soddy for the finish.