Runners get the chance to take a 13.1-mile tour of this southwestern Kentucky city that’s home to Murray State University and just a short drive west of the Land Between the Lakes National Recreation Area at the Murray Half Marathon & 5K Run/Walk, which is hosted by the Murray-Calloway Endowment for Healthcare.

One of the goals of the race organizers, whose beneficiaries include the local Murray-Calloway County Hospital, is that it will help spur both visitors coming in for the race as well as residents throughout the local region to improve their own health by improving their fitness levels and becoming more active in events just like this one.

The Murray-Calloway County Hospital has been serving the region since 1910. The hospital is dedicated to providing patients in our community with the best quality healthcare in our region while maintaining a non-profit, community-owned status. Last year, MCCH wrote off more than $14 million in bad debt and charity care. The employees and staff at MCCH are very proud to be able to provide this service to patients in our region, but would like to be able to do more. In 2008, Murray-Calloway County Hospital created the Murray-Calloway Endowment for Healthcare to improve the quality, access and affordability of healthcare in our region. Its purpose is to advance the mission and vision of your public, not-for-profit hospital. Your gift is an investment in good health. You, too, can make your community a better place to live and work. You can designate your help to the Residential Hospice House Fund, Capital Construction and Equipment Fund, Unrestricted Fund or direct it toward Programs and Services.

First Aid Stations will be at miles 3, 5, and 10 and portable toilets are available at each aid station. Restrooms are also located at Memorial Baptist Church on 10th Street right after mile 1 and in the Bailey Pavilion next to the Dog Park right after mile 2, mile 3 and again at mile 8. Water is available at every mile 1-12 and Clif Energy gel will be offered in a variety of flavors at mile 6, 8 and 10.

For those interested in checking a bag before the run, bag check will be available from 6-7am the Wellness Center classroom (next to the front desk). Bag pickup will be available until 11am. The MCCH Security department will providing this service but cannot be held responsible for lost items.

Several parking locations will be available for runners. A copy of the parking map is available online at www.murrayhalfmarathon.org and will also be included in each participant's goodie bag. For those traveling from out of town or not familiar with the area, signs will be posted pointing to designated parking locations around the hospital. Please respect patients and family needs by only parking in designated areas.

Timing will be performed using the Chrono Track System. Both 5K and half marathon runners will be wearing a disposable B-Tag attached to the back of their race number. Timing mats will be in place at both the start and finish lines to record the runner's start and finish times. Be certain that your race number is pinned to your front and completely visible for race officials and photographers. 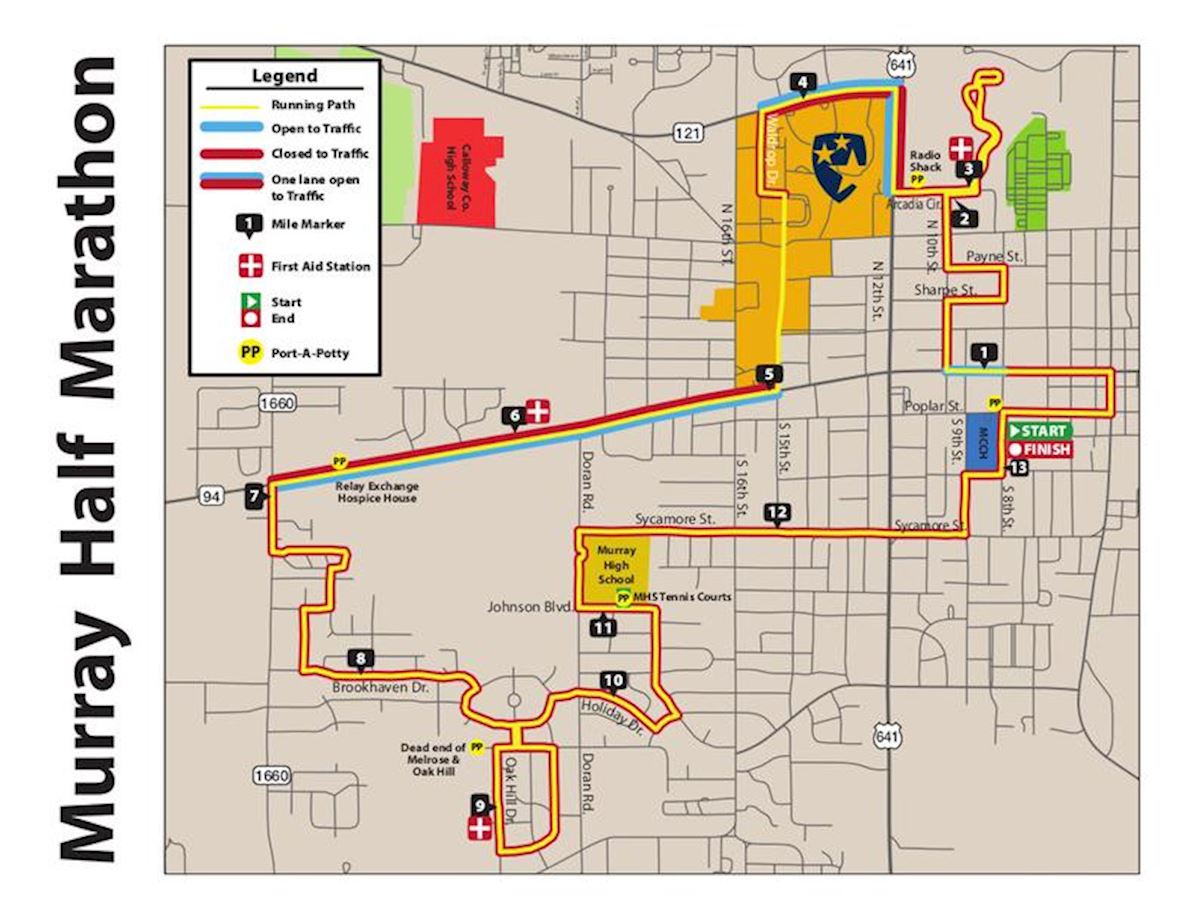 Murray's Center for Health and Wellness

The Murray Half Marathon (MHM) is a 13.1 mile route that gives runners a grand tour of Murray and Calloway County. Runners start at the Center for Health and Wellness on Poplar Street before heading downtown to the historic courthouse square. After winding through scenic Central Park, the runners then hit the pavement of Murray’s main artery, U.S. Hwy 641, passed Murray State University’s Roy Stewart Stadium and out into the beautiful countryside of Calloway County. The runners return to the city on the west side, where they pass through various residential and commercial neighborhoods before returning to Murray-Calloway County Hospital to finish the race. The route stays fairly flat and offers plenty of scenery along the way.

The Murray Half Marathon is a one loop course with short, out-and-back segments in Central Park and at the relay exchange point on Opportunity Drive. The course was carefully laid out so that runners get to experience the best of Murray. Runners will visit beautiful historic downtown with a short stroll through Central Park before a section on 641 that leads you to the winding country roads. Runners are then guided along Murray State’s scenic campus. This route does have a few hills, but they are a nice break from the predominantly flat Kentucky terrain.

Mile 0.5 - Downtown Murray:
Murray's 100 year old Courthouse built in 1913. The original court House burnt to the ground in 1903 and wasn’t rebuilt until 10 years later because of a debate over the new design. Original cost of the court house was $49,679. which today would be equivalent to $1,173,613. The court house clock was inoperable for 20 years and was recently repaired September of 2013.

Monument honoring Confederate soldiers Built in 1915 is the only confederate statue of facing north east. Robert E. Lee statue is the only confederate statue in the US not facing south. It is believed that Robert E. Lee is facing his home state of VA. Statue weighs 27,000 lbs and is made of Italian marble. Between the Visitors Bureau and the Baptist Church is a section old iron fence that once surrounded the old Court house that burned in 1903.

The First Christian Church is the second public building in Murray and the only building that carries its original name. This church was established in 1844 and is located just off of Main and 5th street. This church was rebuilt in 1904.

Library Annex. A Victorian home built in 1891 was recently purchased by Murray Main Street. This home will soon be renovated into a history museum featuring rooms such as: Mason Memorial Hospital and medicine, Nathan B Stubblefield – Invention of radio, History of tobacco farming and the Night Riders, History of county schools, Prominent women of Murray/Calloway, and showcasing local Agriculture including Popcorn.

The Old Wadesboro Court house was the first public building in Jackson Purchase area, built in 1823 for $100. This Courthouse remained in use until 1851. The court house was moved to the park in 1970’s and remains there to do as a local landmark.

Murray Train Depot was once a passenger depot built in 1907 is now home to Playhouse in the Park, the longest continuous community theater in the Commonwealth of KY, and was established in 1977.

Old Red Tobacco Barn built in 1953 is showcased in the East Quilt Trail. The barn features a painted quilt known as “The Tree of Life”. This barn is the last remaining building from the Ryan Farm. This barn was once owned by J.N. Buddy Ryan. The Ryan’s were famous in the 1900 for breading the best coon dogs in the country. Renowned outlaws Frank and Jessie James have been said to have spent the night on the Ryan property in 1800’s.

Mile 2.5 - corner of 6th and Main: is the Diuguid Queen Ann Style House 1899. This home is now home to a Law office. This house is believed to be haunted by Edwin Diuguid Jr. - a seven year child, who died in the early 1900’s.

Mile 10 - North 16th Street:
Murray State University – Home of more than 10,800 students and recognized by U.S.News & World Report as a regional university top tier for the past 20 consecutive years. Alexander Hall a new state-of-the-art science complex for biology and chemistry opened in 2004 and is located on the campus of Murray State University.