See other Ultra Marathons in Mai

The Massanutten Trail is a 71-mile (114 km) National Recreation Trail located in George Washington National Forest in Central Virginia. Much of the path is steep and rugged terrain, and presents many mountain vistas. The trail traverses the Massanutten Range around its inner valley. Shenandoah National Park is to the east, and Great North Mountain is west. The trail has its origins in the American Revolutionary War. Originally known as Morgan’s Road, a portion of the trail at Veach Gap was built as a potential avenue for retreat in case the Continental Army had been defeated at the battle of Yorktown. George Washington had Daniel Morgan construct the road over the eastern ridge into the valley.

In the 19th century, the area was used for mining and the production of charcoal. Elizabeth Furnace was a blast furnace utilized to create pig iron. Signal Knob, a peak on the northern end of the trail, was used by the Signal Corps of both armies in the Civil War. In 1933, Camp Roosevelt, located on the eastern part of the trail, was established as the first Civilian Conservation Camp. In the latter half of the 20th century, there were many trails established in the Massanutten area. The Potomac Appalachian Trail Club had envisioned a long distance trail there since the 1960s, and in 2002 the Circuit Trail was completed.

The Massanutten Mountain Trails 100 Mile Run is a challenging 100 mile trail ultra over a demanding, rocky course in the Massanutten Mountains of Virginia’s Shenandoah Valley. The course includes short but rugged mountain climbs that total over 18,000ft. The event is noted for its well-stocked, friendly aid stations and good course marking.

The Caroline Furnace Lutheran Camp offers great opportunities for inexpensive lodging at the start. This is rustic but comfortable. There are three types of lodging available. All are located a short distance from the start/finish area. There are six cabins available. Each unit has bunk beds, sleeps 12, and has a half bath. There are six sukkahs available. Each sukkah sleeps eight. These are "three-season" cabins with screened walls. There is no electricity and no bathroom facilities in the units. Tent and car camping is available. (Sleeping in your car is considered camping, and you must pay for it.) Cabin bunks: $30 per person. Sukkah cots: $10 per person. Camping: $10 (additional people in same tent or car $5)

There are 15 aid stations. Most will be fully stocked.

All finishers will receive an engraved belt buckle, silver for under 24 hours, pewter otherwise. There will be awards for the male and female winners in the categories: Overall Master (age 40-49), Senior (age 50-59), Super Senior (age 60+)

Drop Bags are accepted at most Aid Stations.

Food and refreshments at the finish line that will be free to all: runners, volunteers, crews, and pacers. 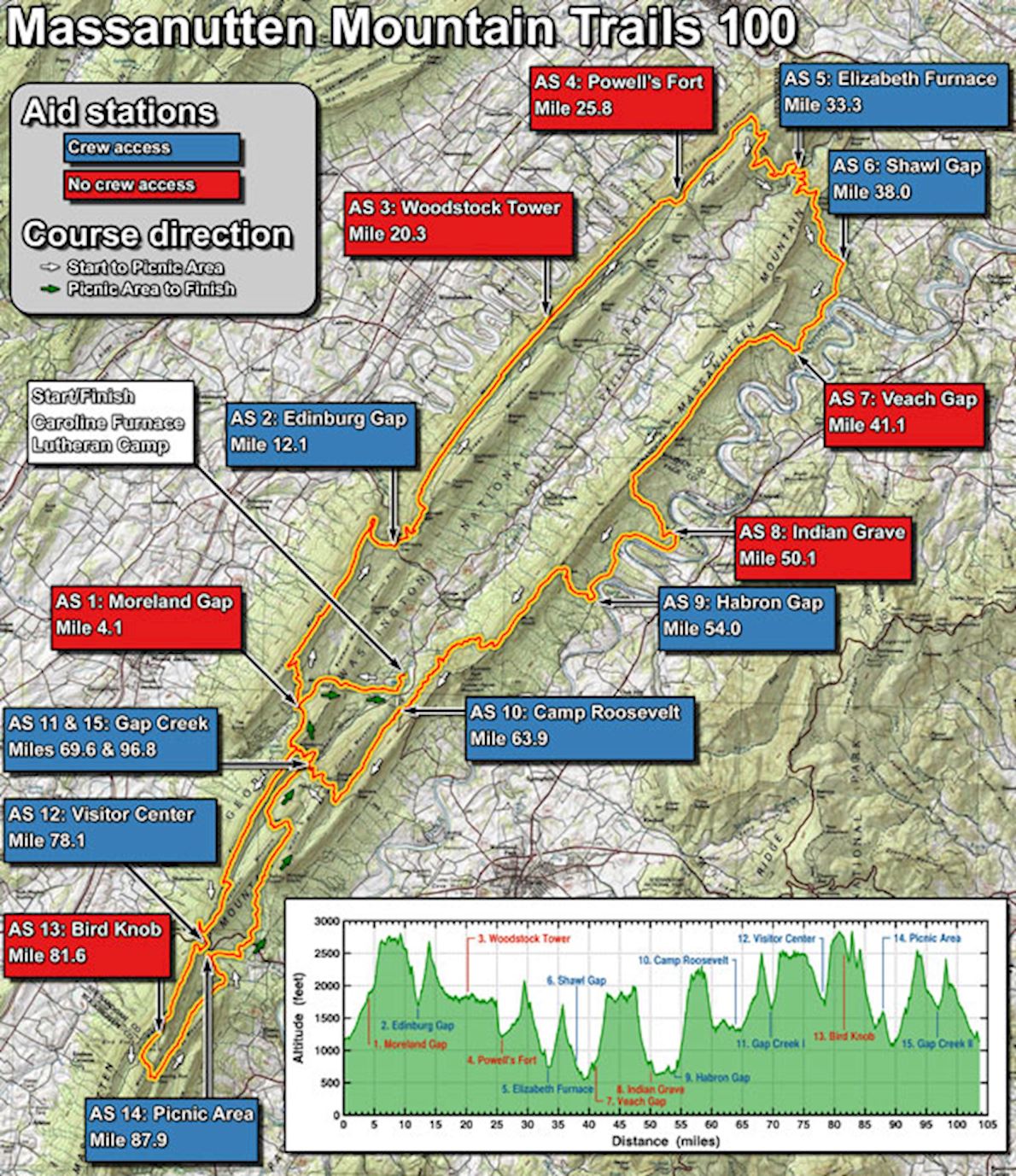 The Massanutten Mountain Trails 100 Mile Run is a challenging 100 mile trail ultra over a demanding, rocky course in the Massanutten Mountains of Virginia's Shenandoah Valley.  The course is out and back, with the start/finish line at the Caroline Furnace Lutheran Camp. The course includes short but rugged mountain climbs that total over 18,000ft.