Luce Line Lace Up Half Marathon

Be a Part of Hutchinson Running History
A unique running series offering a visually stunning course and serious bragging rights!

Set for its annual running this year here in this small city nestled along the south fork of the Crow River in southern Minnesota, just over an hour’s drive from downtown Minneapolis, this race follows portions of the 63-mile long Luce Line Trail, a converted railroad trail that dates back to the early 1900s here.

Today, the rails-to-trails effort that began in the 1970s has created beautifully scenic tree-lined stretches along the Crow River, especially in Hutchinson, where runners will travel for long stretches of the race.

Race is 1 hour West of the Minneapolis/St. Paul Metro area on Hwy 7. This race will be entirely on the paved portion of the Luce Line Trail. From the starting point at Jaycee’s Riverside Park, the Vivid Image Half Marathon will loop around West River Park, then head east about 5 miles to County Road 4 (Major Avenue), then turn around and return to the start and continue on a loop around the Gopher Campfire wildlife sanctuary (1 mile dash route) ending at Jaycee’s Riverside Park. Because the course is flat, it’s a great opportunity for a PR!

Aid/water stations will be every 2 miles throughout the course. 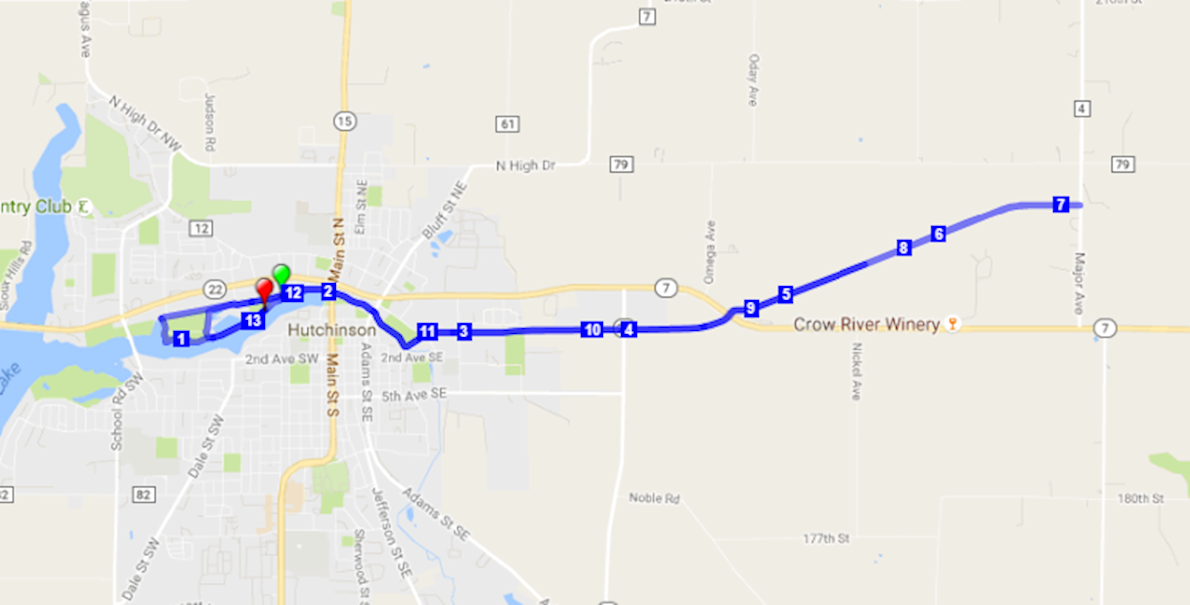 Located in the heart of Minnesota, Hutchinson offers the most beautiful and tranquil rural amenities you can imagine for this new running series. The Luce Line Lace-Up features the Luce Line Trail that winds itself through quiet nature offering a chance for all racers to run alongside the historic Crow River. Hutchinson offers a spectacular city-wide art sculpture exhibit, peppered along the parks and trails; some of which you’ll see in the Jaycee’s Riverside Park and the rest you can take time to see after the race! Hutchinson is home to a natural park reserve, with more wildlife than you can count as you run past. Whether you’re planning to take advantage of the flattest course around for a new PR best, or slow down and enjoy the scenery and enthusiasm of those cheering you on, the Luce Line Lace-Up will find a place in your heart and on your permanent annual race calendar!

You’ll start the race at Jaycees Riverside Park just outside downtown Hutchinson, home to just over 14,000 people. From there, runners will make loop around the park by starting out west along the trail, running straight until they reach Les Kouba Point.

There, you’ll turn left and head south toward the Crow River, where you’ll run the section of the trail that unfolds along the river all the way past the race start/finish line area. Once you pass that, you’ll head out east toward the city, staying next to the river for most of the next mile or so.

After that, you’ll begin a long, out-and-back stretch past Kimberly Park and into the rural countryside just east of Hutchinson, remaining on the Luce Line Trail the entire way – organizers note that there will be water and aid stations every 2 miles, and that the race follows a USATF-certified route.

Once runners reach the turnaround point at County Road 4 (Major Road), they’ll head back along the route they’ve just run, west all the way back to Jaycee Riverside Park for the race finish.

The 13.1-miler is officially titled the Luce Line Lace Up Vivid Image Half Marathon, and it will also feature a stretch around the Gopher Campfire Wildlife Sanctuary.