The idea of running from Asia to Europe was born in 1973, or perhaps even earlier, but no one made it public until then. In 1979 a group of German tourists made this idea a reality by running the very first Istanbul Marathon on April 1st, and it was not a Fool’s Day joke!

Initially the marathon in Istanbul was called Asia-Europe Race to then become the Eurasia Marathon. Finally in 2013, to promote the city and it’s developing tourism, the race received the name Istanbul Marathon.

The Vodafone Istanbul Marathon is mostly flat and completely closed to traffic. Most of the course is on the European side but it starts in Asia near the iconic First Bosphorus Bridge. Runners then continue on to the bridge which offers everyone an amazing and privileged view of the city.
Runners pass many points of interest like the Blue Mosque, Hagia Sophia (Church of the Holy Wisdom) and finish at the İnönü Stadium.

When planning your trip to Istanbul Marathon do not forget that this city has a lot to offer apart of a great race. Make sure you visit the Grand Bazaar (Kapali Carsi) in Beyazit which is mind blowing covered streets market with over 4,000 vendors.
You will not want to miss one of the Whirling Dervishes Show which attracts a lot of tourists.
The course of the Vodafone Istanbul Marathon passes near Hagia Sophia church (formerly a mosque) but this should not be enough for you. After the race it is worth going back to explore this gem, dating back to the year 325 A.D and named the 8th wonder of the world.

There is definitely a lot to do in the city after or before you run the Istanbul Marathon. Get your tickets now and start planning the trip today!

Drinking/sponging and refreshment stations are provided every 2.5km after 5kms.

All marathon finishers will receive a commemorative medal at the finish line.

A recycling chip which is going to take the running time will be given to all runners at Marathon and Sport EXPO. All runners must tie this timing chips to their shoelace.

Free transportation to the start area will be provided for the participants on the race day from Taksim, the city centre and from Sultanahmet. 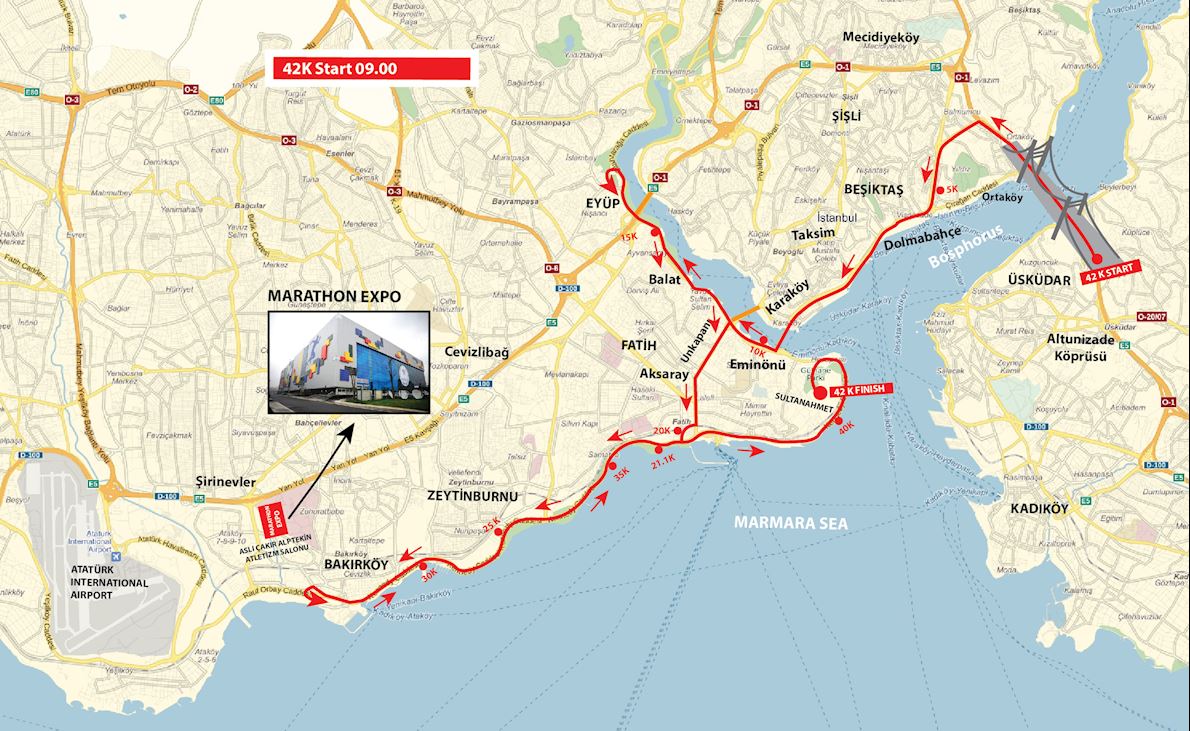 Asian side of Istanbul

Art & Architecture
The conquering armies of ancient times tended to ransack the city rather than endow it with artistic treasures, but all that changed with the Byzantines, who adorned their churches and palaces with mosaics and frescoes. Miraculously, many of these remain. Their successors, the Ottomans, were quick to launch an ambitious building program and the magnificently decorated imperial mosques that resulted are architectural triumphs that together form one of the world's great skylines. In recent years, local banks and business dynasties have reprised the Ottomans' grand ambitions and endowed an impressive array of galleries, museums and festivals for all to enjoy.

Local Life
Some ancient cities are the sum of their monuments, but İstanbul factors a lot more into the equation. Chief among its manifold attractions are the locals, who have an infectious love of life and generosity of spirit. This vibrant, inclusive and expanding community is full of people who work and party hard, treasure family and friendships, and have no problem melding tradition and modernity in their everyday lives. Joining them in their favourite haunts – çay bahçesis (tea gardens), kahvehans (coffeehouses), meyhanes (Turkish taverns) and kebapçıs (kebap restaurants) – will be a highlight of your visit.

The marathon starts on the Asian side of the city, shortly before the First Bosphorus Bridge, crosses the bridge giving an outstanding view of the Bosphorus and Istanbul, passes many historic sites including the Blue Mosque and Hagia Sophia, and ends in the İnönü Stadium in the European part. In all, the race crosses three bridges, one over the Bosporus and two over the Golden Horn