See other Halbmarathon in Juni

Is there another race that represents Iowa running more than Dam to Dam? Frankly the answer is easy--NO! Dam to Dam is for runners; not a charity, a sponsor or a non-running organization. It is “run” by volunteers and non-profit.

Water stations are provided at least every 2 miles with medical support at the last water stations.

A special Dam to Dam medal will be presented to each finisher under 3 hours 15 minutes immediately after crossing the finish line area. Half-Marathon awards will be presented at 9:45am near the finish area. Top male and female Half-Marathon winners will be announced to the crowd and receive a trophy. Top 10 money winners are eligible for age group awards. Brooks apparel will be awarded to all age division winners at the awards tent, 13th & Grand, west of the Pappajohn Center, beginning at 9:00am.

All runners will be provided a bib chip. Your race number will have a chip affixed to the back. You will be timed according to your chip or net time. Open and age division awards will be determined by gun time. The bib chip cannot be folded, pinned or bent in anyway for it to record your time correctly - failure to wear the race number correctly will result in disqualification. 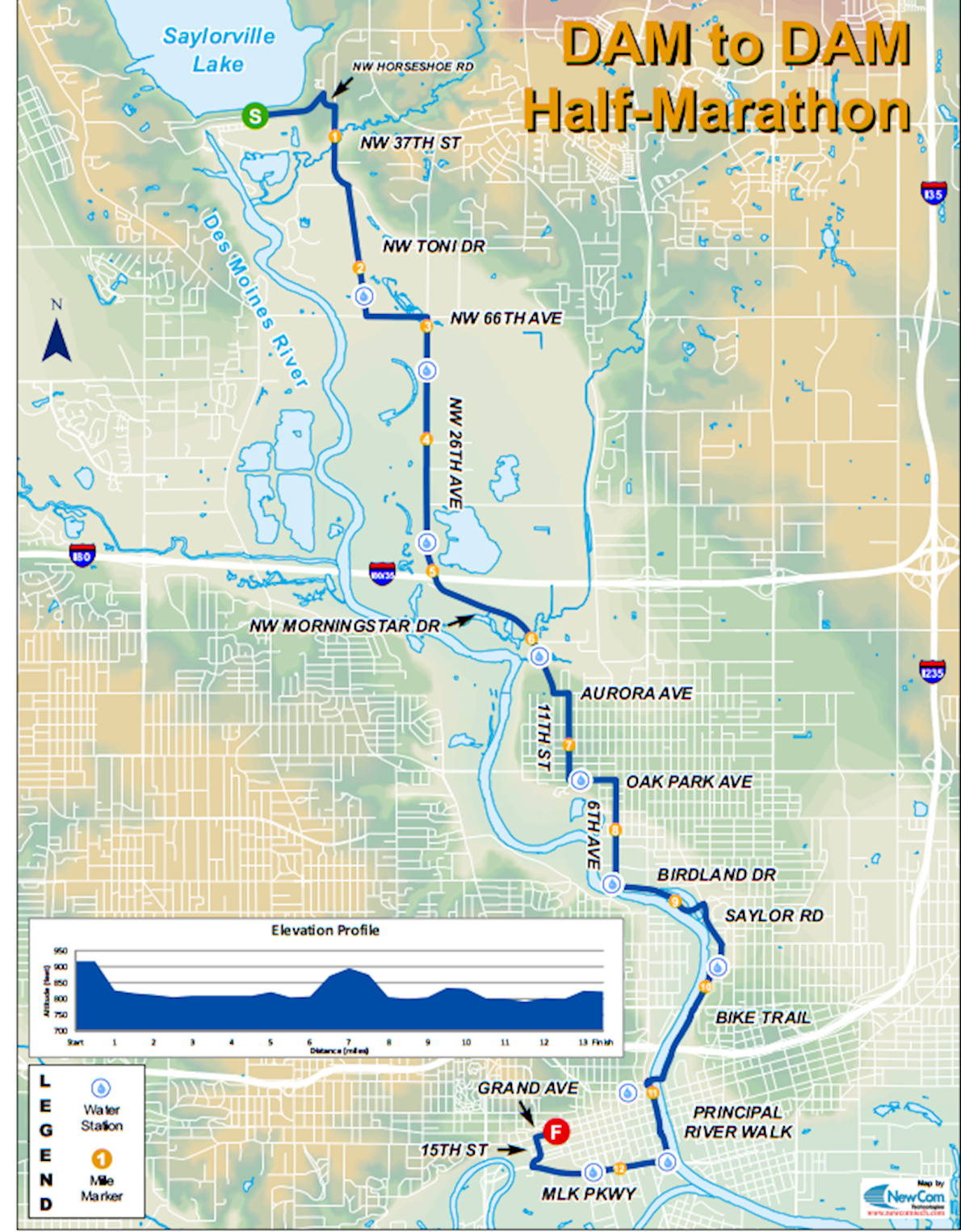 Iowa is Agriculture. Since its first settlers crossed the Mississippi River in the 1830s, Iowa's history has been shaped by the richness of some of the best soil in the world. Bordered by two major river systems, Iowa's gently rolling countryside was originally covered by thousands of acres of prairie grass, some of it so high that to see over it required riders to stand on top of their horses.

Each of the 102 American Flags presented on Morningstar Hill (fondly referred to as Memorial Hill on race day) represent the loss of an Iowa serviceman or servicewomen while serving in combat since the first Dam to Dam on June 15, 1980. The tribute to Iowa’s service men and women is the result of a long history that Dam to Dam has had with Iowans serving their state, not to mention that the race now falls on the first Saturday after Memorial Day.

One hundred years ago the citizens of Des Moines were worried about taxes, annexation, politics in Washington, D.C., a new form of city government, building a new city hall, and consolidating the school districts around the city into one large system.

In September 2009, the Des Moines Art Center and the City of Des Moines partnered to open a 4.4-acre sculpture park in the heart of Downtown Des Moines. It currently displays 24 works of art worth a combined $40 million, a collection that ranks among the most artistically significant sculpture parks in the nation.

A focal point of The Principal Riverwalk, this iconic bridge spans the Des Moines River, linking the east and west sides of the city at the northern edge of the riverwalk loop. This single-arch pedestrian bridge opened on June 28, 2010.

The City of Des Moines traces its origins to May 1843, when Captain James Allen supervised the construction of a fort on the site where the Des Moines and Raccoon Rivers merge. Allen wanted to use the name Fort Raccoon; however, the U.S. War Department told him to name it Fort Des Moines. The fort was built to control the Sauk and Meskwaki Indians, who had been transplanted to the area from their traditional lands in eastern Iowa.