If you know your running history, then you know exactly the significance that the small town of Ashland, Mass., plays in the sport’s most legendary race.

The annual Ashland Half Marathon 5K Race & 1 Mile Walk/Run will kick off in late October and begin and end at Marathon Park, which marks the original starting line area for Boston’s marathon for its first 27 years, from 1897-1923.

Set in late October to take advantage of the cool temperatures runners of all stripes desire the Ashland Half-Marathon winds its way along a picturesque 13.1 mile figure 8 course through Ashland’s foliage-filled roads and lanes.

For the 5K there is one on Fountain Street. For the Half there will be 5: 1) On Cedar Street; 2) At Warren Center on Chestnut Street; 3) Near the boat launch in Ashland State Park; 4) On Woodland near West Union; 5) Along Front Street at Mile 10; 6) Near the Gate on Winter Street near Ashland Town Forest.

The course is open for three hours from 10:00 a.m. until 1:30 p.m., leaving plenty of time for all runners to complete the challenge.

There is ample FREE parking at the Ashland MBTA commuter rail station lot (on Saturday-Sunday of race weekend only) just steps away from Marathon Park, but please be advised that Pleasant Street will be closed at 9:45 a.m.on race day. If you are able to get to the event early you are welcome to park at the T lot on the Pleasant Street side. If you are running late you are going to be re-directed to the T lot on the other side of the tracks accessible via Route 135. There is a walkway over the tracks to the start at Marathon Park. There are other parking options available, click button below for your options on race day. Please plan accordingly. Note there is no parking at the VFW on Race Day, or on Connect Community Church property at any time. 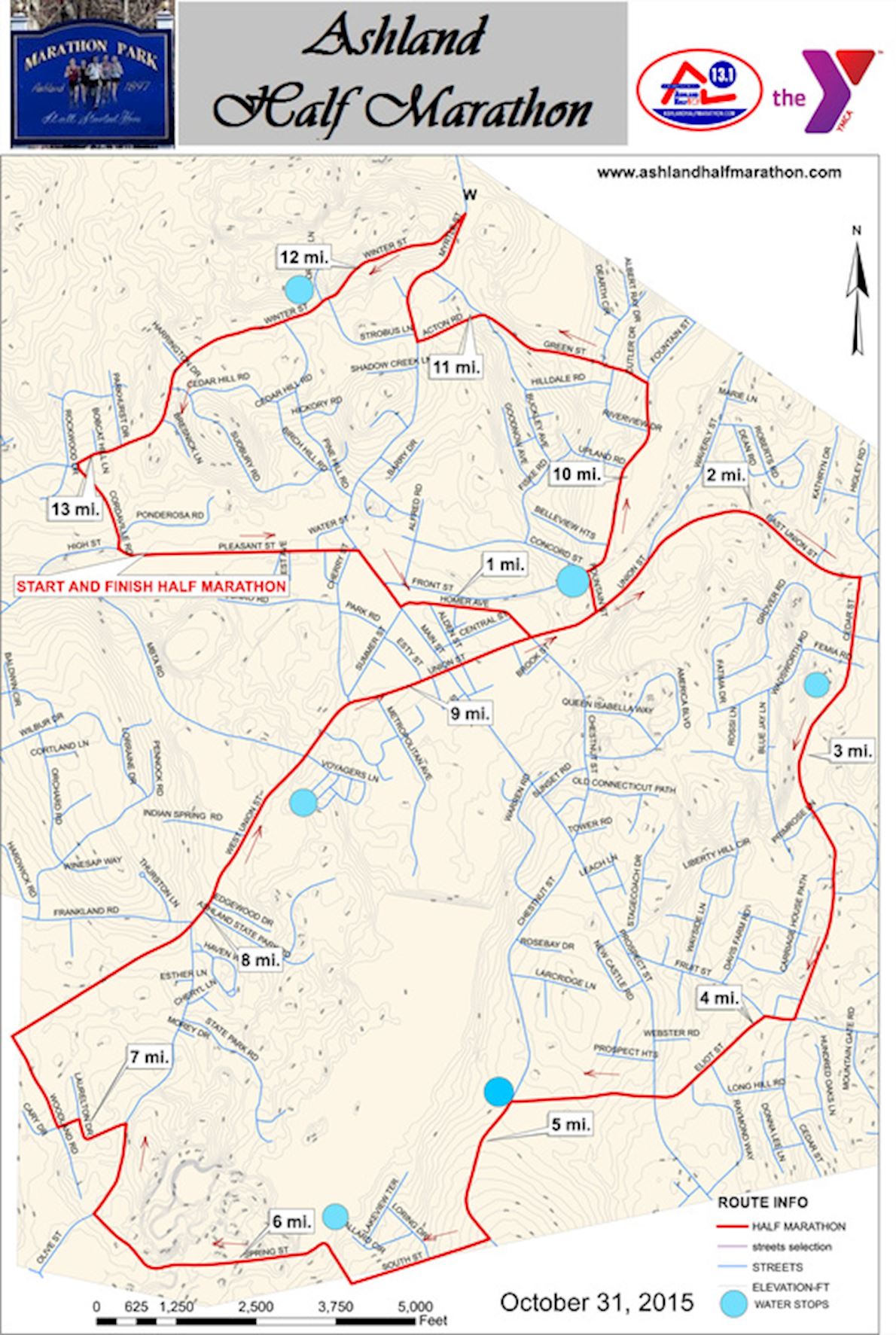 The Ashland Half Marathon is a 13.1 mile course running through picturesque Ashland Massachusetts. The half marathon course at some points running the Boston Marathons traditional route through Ashland and also running parallel to the Subdury River and at others skirting Ashland State Park. The starting line is at Marathon Park on Pleasant Street.

Runners at this fall’s Ashland Half will follow an out-and-back course that starts and finishes in Marathon Park, and from there follow a figure-eight-shaped course along the rural country roads and through residential neighborhoods just outside this town of about 16,000 residents just outside Boston.

The hilliest stretches occur around the middle portion of the race, as runners are making their way around Ashland State Park and the reservoir lake that sits along its southeastern edges.

Much of the course is framed by tree-lined roads, especially the final few miles that bring runners along the edges of the Framingham Reservoir, through City Park and through the neighborhoods along Green, Myrtle and Winter Streets. The last mile is almost all downhill back in to the finish line, where Cordaville Road meets Pleasant Street, near Marathon Park.