We invite you to join us in Midway this fall for the annual Iron Horse Half Marathon. We want to make your race day special by providing the following race amenities: Long sleeve Brooks Podium shirt with custom Iron Horse artwork, suitable for framing Iron Horse poster by local artist Cricket Press, custom bib numbers, hand made age group awards by local potter Kentucky Mudworks, free unlimited downloading of all race photos after the race, free custom 13.1 sticker to all participants, and finally, one HUGE finisher medal!

Nestled in the heart of Kentucky’s bluegrass country — at the midpoint of the railroad line between the cities of Lexington and Frankfort — Midway hosts the Iron Horse Half Marathon along a route that shows off the rolling green hills of its thoroughbred horse farms and rural countryside.

The race will start in downtown Midway on S. Brand St., head west on Stephens St./Spring Station Rd., turn around just beyond the railroad crossing, and then head back into Midway. The race will then head east on Weisenberger Mill Rd., will turn around at the Paynes Depot Rd. intersection (where you will cross a timing mat). The course will return to Midway where it will finish on S. Brand St. near the start area

Designed as a benefit for the Woodford Humane Society and the City of Midway, the race follows what is basically an out-and-back course that starts and finishes in downtown Midway, though the race finish will take place a few blocks from the starting line, which lies at the intersection of Stephens Street and South Brand Street.

The minimum age for competing is 14.

Water stations will be positioned approximately every 2 miles. SWORD sports drink will be provided on the course during the second half of the race. Clif Shot gel in caffeinated Double Espresso flavor and non-caffeinated Razz flavor will be available at approximately mile 10. Please don’t throw your empty gel packets on the ground. We will also have port-a-johns approximately every 2.5 miles and roving first aid along the course. Food, drink and music will be available in front of Darlin’ Jeans’ Restaurant immediately following the race. Note the post-race food, drink and music is NOT by the immediate finish line area.

On street parking will be available throughout the town of Midway on a first come first served basis. Parking is also available at Midway University and Northside Elementary School.

The race will be chip timed. Timing mats will be set up at the starting line, the second turn around (Weisenberger Mill Rd), and the finish line. Please make sure you cross the timing mat at the second turn around. If this mat is not crossed, you will not receive an official time or be eligible for an award. 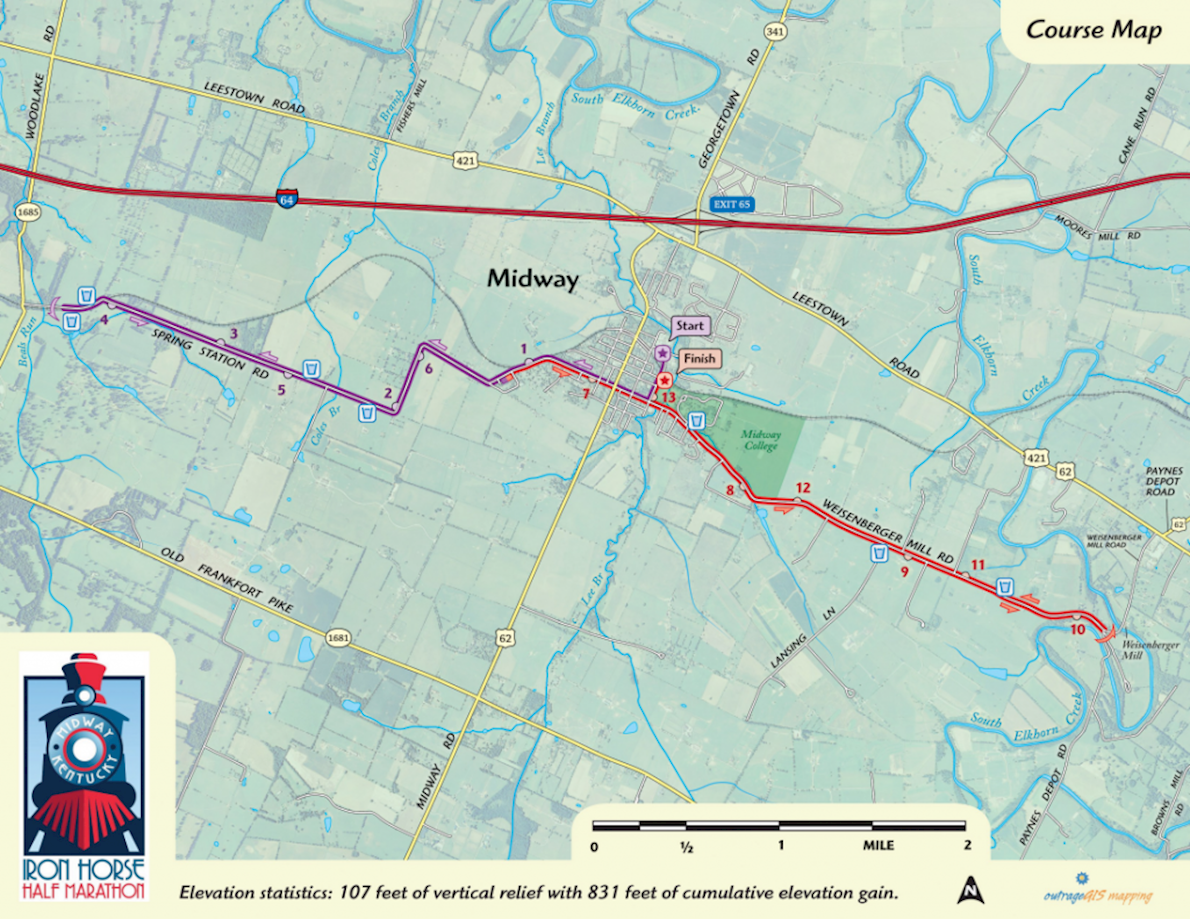 The course that starts and finishes in downtown Midway, though the race finish will take place a few blocks from the starting line, which lies at the intersection of Stephens Street and South Brand Street.

From the start, runners first head southeast along Stephens past the campus of Midway College until they meet up with Weisenberger Mill Road, which they follow for roughly the next three miles.

The route rises about 100 feet in elevation over the course of the first mile and a half or so, a change that’s followed by an equal downhill descent on the way back toward Midway from the turnaround point, near the bend in the river just off Weisenberger Mill Road.

Runners remain on Spring Station as it turns first left and then right, followed by a long, straightaway stretch for about the next mile and a half until the turnaround point, just before runners reach Woodlake Road.

The route then brings runners back in the opposite direction along Spring Station Road toward downtown Midway, to the finish line just off Turner Street.

Though runners should expect rolling hills along the country roads outside Midway, the elevation changes are not overly severe, as the overall course elevation change is just over 100 feet.