Between the proverbial Rhenish joie-de-vivre and the cosmopolitan charm of a trade fair city with global repute, there is a wealth of attractions to be seen and experienced. The German Opera on the Rhine, numerous theatres and 18 museums document Düsseldorf’s position as one of the leading cultural cities in Germany. With its famous Königsallee, a splendid boulevard lined by chestnut trees, regarded as a catwalk for the latest fashion trends, the North Rhine-Westphalian state capital is one of the shopping destinations par excellence.

Over a length of 2 km, the Rhine embankment promenade invites you to a stroll with a breathtaking view of the city and river. Enjoy the Rhine from it's most beautiful promenade.

The Düsseldorf Marathon is an annual marathon race in Düsseldorf, Germany in early April.The course runs through parts of the city and alongside the banks of the Rhine. It is a double-looped format and the route is generally a flat one.

The event is sponsored by Metro, a large international retailer based in the same city.The men's course record was set at the 2013 race, when Dereje Debele won with a time of 2:07:48 hours, while the women's course record was set by Wolha Masuronak in 2018, with a time of 2:25:25. Kenya has been the most successful nationality in the men's race. The women's race has seen mostly Germans top the podium.

9 refreshment and 8 catering points can be found along the course.

The time limit for the whole distance is 6:00 hours. 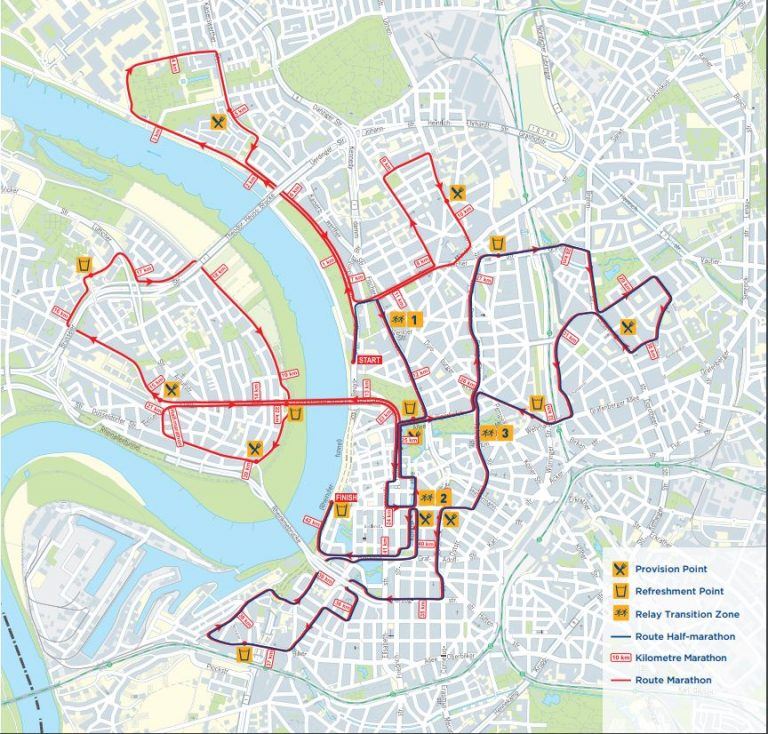