***IMPORTANT INFORMATION: This event has been postponed to October 18th 2020 due to the Coronavirus outbreak***


The Belgrade Marathon (Beogradski Maraton) is one of the biggest sporting events in Serbia. A group of enthusiasts came up with a plan to restore the race that existed in 1910 from Obrenovac to Belgrade. The first modern marathon in Belgrade took place on May 8, 1988. The track length of the original 1910 marathon was 23 km with several checkpoints.

The track length of the 1989 marathon was 46.7 km, with the start and finish being in front of the Federal Parliament Building. Since 1990 the Belgrade Marathon has a standard 42.195 km length.The 1999 NATO bombing of Yugoslavia did not prevent the Marathon from taking place that year, and on April 17 the race was held as a metered group run. About 40 runners from nine countries crossed the finish line at 3 hours 15 minutes and 16 seconds. The runners from NATO countries were Zane Branson from the USA, and Michael Turzynski and Heinz Lorber from Germany. The latter two are also founding members of the German 100 Marathon Club. The Yugoslav Sport Society "Partizan" took it upon itself to organize the marathon.

The City of Belgrade, its departments and communal services, helped organize the event. Also involved were the executive bodies of city government, the Army of Serbia, the Serbian Police, and a number of sponsors. In September 2003, Belgrade declared that the Belgrade marathon is an event of special importance for the city. The same organizers also arrange the Belgrade Race Through History, a race around the city's Kalemegdan fortress, which started in 1996. Belgrade Marathon is adapted for people of all ages, and is separated into the following categories: The Children's marathon is a race for children The Fun Run is the event with the most participants (5 km). The Half-marathon is a half-distance marathon that is in accordance with IAAF standards. The Marathon is a standard 42.195 km length marathon.

There is equipment storage available.

Time limit for the marathon race is 6 hours.

Race number with timing chip, T-shirt, medal at the finish, diploma, refreshment along the course and at the finish area, race programme/map and pasta party! 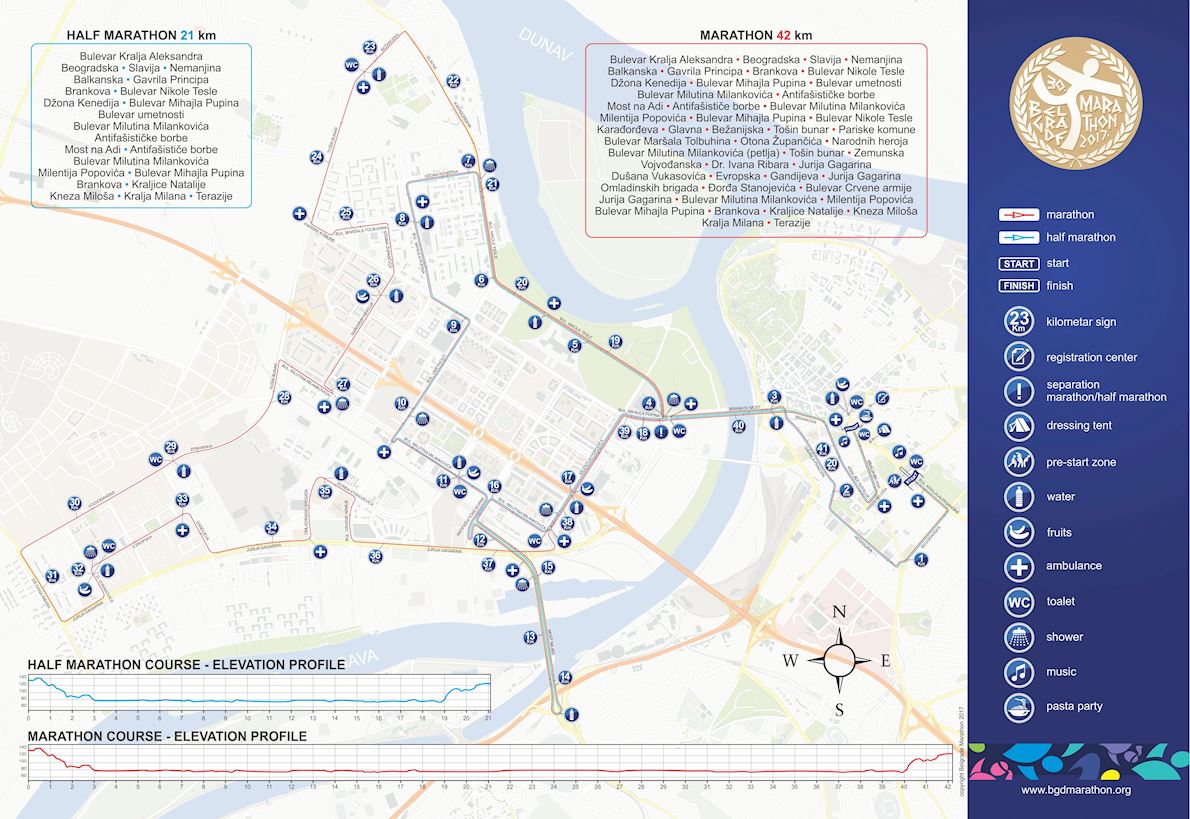 The race starts at 10:05 at the junction of Knez Miloš Street and Nikole Pašića Square (in front of the Serbian Parliament building). The course runs through the following streets: Bulevar kralja Aleksandra – Branka Krsmanovića – Žička – Kralja Nikolaja II (14. decembra) – Mekenzijeva – Trg Slavija – Kralja Milana. The finish is in front of „Moskva“ Hotel.